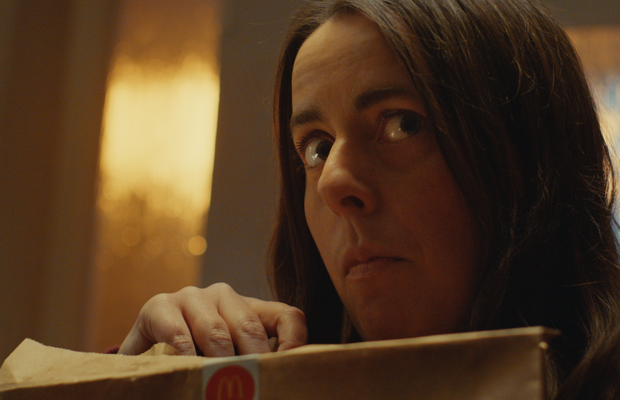 Hot off the heels of the now-iconic ‘Lights On’ OOH from February this year which just bagged a D&AD Pencil (Craft/Illustration), McDonald’s is launching ‘There’s nothing quite like a McDelivery’ – for the moments when only a McDelivery will do.

The campaign, launching 6th June with a 40 second TV spot in the England warm-up game, includes two films – first ‘Hungry Eyes’ and then ‘My House, My Rules’ – developed by the team at advertising agency Leo Burnett, with media planned by OMD. The two ads bring to life insightful and observable truths about what makes a McDelivery experience unique.

To help cement McDelivery in the hearts and minds of McDonald’s customers, the creative running across TV and VOD reminds them that their favourite food is available to order straight to their door via the My McDonald’s App, as well as Uber Eats and Just Eat.

‘Hungry Eyes’, spotlights the unique craveability of McDonald’s food by focusing on the expressive nature of people’s eyes as they experience their (or someone else’s!) McDelivery moment. Set to the iconic 1980’s track ‘Hungry Eyes’ by Eric Carmen, the creative brings to life the anticipation, excitement, jealousy, and pleasure that go hand in hand with a McDelivery.

The second film, ‘My House My Rules’ uncovers the personal, intimate rituals unique to a McDelivery that people would only partake in when they’re in their own home. Whether that be the joy of dipping your Chicken McNugget in three different sauces for the perfect taste combination, through to the different ways people may like to eat a Big Mac in their own four walls – reinforced by the track ‘I think we’re alone now’ by Tiffany.

Steve Howells, director of marketing and media, McDonald’s, said: “We know that a McDelivery isn’t just about answering the urge for your iconic McDonald’s favourite. It’s also about the rituals and routine every household has when the McDelivery arrives. Our new campaign celebrates this unique relationship our customers have with us – there really is nothing quite like a McDelivery!”

Accompanying the TV are two strands of social and radio, the first focuses on delicious food photographed in McDelivery moments, the second brings to life the ‘House Rules’ campaign with the rituals surfaced from McDonald’s fans and customers. It will be supported by a month-long partnership with the Sidemen, sharing their McDelivery rituals and McDonald’s favourites during the summer of live sport.

Mark Elwood, executive creative director at Leo Burnett, said: “A McDelivery, that feeling of excitement when you’ve ordered, willing it to turn up quicker by looking out the window constantly, the taste of the first fry from the bag by the front door… all truths beautifully brought to life with, in my opinion, the perfect soundtrack. Then there’s the personal rituals that follow, knife and fork anyone? McFlurry before your McChicken sandwich? It all goes to show, there’s nothing quite like a McDelivery.”