Alexander Perkins, Ethan Lawrence and Rob Witcomb lend their voices to the campaign from Nexus and director Conor Finnegan 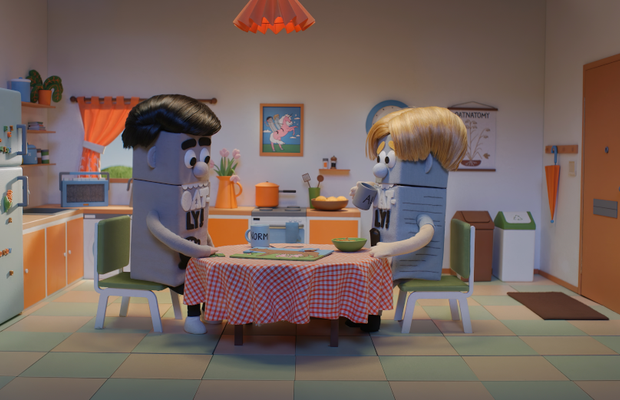 Oatly, the world’s original and largest oat drink company, today announced the launch of its biggest UK campaign - THE NEW NORM&AL SHOW. The campaign aims to kick off a nationwide conversation about how eating a plant-based diet is a totally normal choice these days, all through the medium of…puppets.

Oatly will launch ‘THE NEW NORM&AL SHOW’, with a mini-series of five episodes (each between two-five minutes long) featuring two oat drink carton puppets named Norm & Al (aka norm-al) who, just like many of us, are trying to navigate the shift to plant-based eating. The series kicks off with a five-minute pilot called ‘Norm’s Old Pal Milk’ which tells the origin story of how Norm & Al met.

Through the power of puppetry, bad singing and even worse dancing, each episode offers an awkward but often familiar look into the plant-based world of Norm, the wiser of the two characters, and Al, who always tries to do the right thing.

The duo also show us that anyone can try adopting a plant-based diet, you don’t have to be a hipster  to make the move away from dairy or meat and you don’t need to go fully vegan in order to make a difference to the planet. As Norm sings: “It’s okay! You don’t have to break up with meat forever. It’s alright to sometimes eat cheese whenever. Why not dip into the vegan world some days? Come on and eat the flexitarian way!”

Developed by the Oatly Department of Mind Control in collaboration with BAFTA-winning production company, Nexus Studios, and director Conor Finnegan, ‘THE NEW NORM&AL SHOW’, is a fresh and entirely new approach for Oatly and is its biggest ever production, with ten puppets in the cast and eight different sets used.

Oatly’s creative director, Michael Lee comments: “After trying to help people eat more plant-based with super long Instagram posts, dorky Superbowl ads, nonsensical headlines and picking on dads in the UK, we’ve now landed on puppets to do the job. The cool thing about THE NEW NORM&AL show is that it lets us deliver a message that people might normally roll their eyes at, but because it’s puppets, well, who doesn’t like puppets? Despite that last sentence, Norm & Al are really just about adding some fuzzy felt, wobbly arms and flappy heads with well-styled wigs to the plant-based movement, and if that all makes it easier for society to grab on to, then yeah, these puppets will be a total success.”

All five episodes of ‘THE NEW NORM&AL SHOW’ will appear on YouTube and Oatly.com from January 17th. The launch will be supported by Oatly’s largest UK digital media buy campaign across Broadcast VOD (Sky, All4 and ITV Hub), a Programmatic VOD (YouTube), display ads and a Social VOD (Facebook & Instagram).

In true Oatly style, the campaign will also run across OOH from January 17th- 30th 2022, in London, Bristol, Manchester and Glasgow plus on thousands of buses around the country for four weeks.

The campaign is also planned to launch across Europe over the next few weeks in markets including Germany, Austria, Switzerland, Sweden, Finland, and the Netherlands, as well as Australia.

Nexus Studios’ director, Conor Finnegan adds: “It was an udder joy to join Oatly in its mission to make plant-based lifestyles the new ‘Norm(&)Al’. I hope these simple carton head puppets help spread the good word and get more people to move from dairy to plant-based through the medium of song, dance, and awkward silence. It couldn’t have gone butter.”

In addition to the digital campaign, Oatly has partnered with The Guardian across print, display and audio channels. There will be an Observer magazine cover wrap and advertorials plus display takeovers, sliding doors and audio 30” podcast ads.

Oatly will also give away thousands of sample oat coffees in special Norm & Al cups from the ‘Oatly Not Milk Bar’ in both Manchester and London, as well as in partnership with some great coffee shops around the UK.

Uprising: Distilling Ideas to the Most Immediate and Satisfying Form with Laurie Rowan