Mountain Goat Beer offers the chance to win stubby holders, alien eggs and a whole lot of hay in campaign from The Monkeys 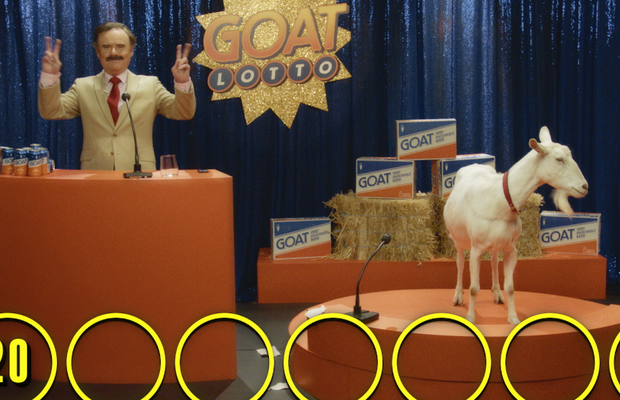 Those who purchased a carton and uploaded their receipt received a unique set of lotto numbers that secured their place in the draw to win a range of life changing prizes – like $50k, or an egg from the movie 'Alien vs Predator'.

Created by The Monkeys, part of Accenture Interactive, and directed by The Glue Society, the promotion ran nationally from 1st October onwards and was amplified across social, out of home advertising, radio and online in the lead up to the final show held on 11th November 2020.

Those who entered simply needed to watch the GOATLotto show, hosted by Glen and Mick the Goat, to see if their lucky numbers appeared on screen.

Mountain Goat Beer marketing manager, Marc Slater, said: “GOAT is an uncomplicated beer and while we needed a good gimmick to sell a few more cases this month, we really wanted to keep it simple. GOATLotto not only helped to do that – we cleared out the bank account and got rid of an old couch at the brewery as well as some leftover stubby holders.”

Ant Keogh, chief creative officer, The Monkeys Melbourne, added: “We tried to do a real lotto but legally we can’t, so we’ve done this instead.”