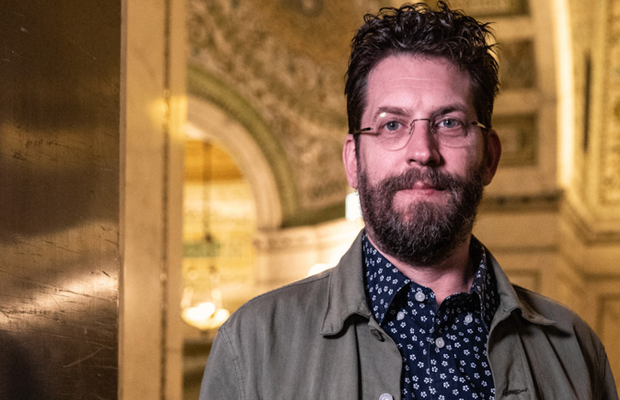 My first job in the ad industry was as an audio visual department assistant for Chiat/Day Advertising in New York. At the time I didn’t know much about advertising. It wasn’t what I went to school for or something I ever thought much about. I wanted to be a music producer and sit at a giant Neve mixing desk. But the AV department was a decent job in an exciting city ... and as far as I could tell, a good start.

Chiat/Day was in the process of moving into a new concept ‘Virtual’ office and there was chaos all around. Nobody had their own space, you were surrounded by noise, vibrating colours, and boxes of documents waiting to be scanned into a computer (all part of our new 'paperless future'.) It was hard enough to get settled, let alone learn how an advertising agency works.

I had not met Jay Chiat yet, but I would see him from time to time circling the workstations and bean bag chairs of the open floor plan, ‘like a Great White Shark,’ as a coworker put it. His presence in the office was mysterious and intimidating. However, once or twice a year Jay would gather up all of the newbies for what was called ‘storytime.’ My story time invitation came four or five months after I got there.

It was like kindergarten all over again; we even sat on the floor. Jay addressed the group from an oddly designed chair with springs for feet that caused it to bounce a bit as he spoke. It was like something you might see in the pages of a Dr. Seuss book. After everyone got acquainted, Jay launched into a story about a friend who reached the end of their rope and wound up in Las Vegas with very little left in their pocket or their soul. Years later, one can’t help but think of the final season of Mad Men. The story, I believe, was intended to teach us about work/life balance.

Chiat/Day was a fun place with lots of energy and a work hard, play hard mantra that was easy to get caught up in. Jay’s cautionary tale about staying grounded wasn’t all I took away. What I also learned from the experience was how powerful and vital the art of storytelling actually is - and Jay was a master. Everything about his story: the setting, the tone, the cadence was perfect. Each word was riveting. The details were visceral, terrifying, and heartwarming. I came to understand what was special about a great story: its empathy … which is also what makes great art communicate. And it’s what makes advertising effective.

Being given the chance to be a part of a great storytelling team is what inspired me to come into work and navigate the chaos each day. Some years later, a little more established in my career, I was asked to help bring to life a 200 pound foam rubber, love sick walrus. The vision was cast, the actors did their job, the puppeteers got the movement down, production designers set the stage, now I was in charge of what it sounds like – what is its voice? I see the challenge in working on a collaboration like this is to remember the common goal, dig deep, find the details that fall into your discipline and help elevate what is being said. Every little brush stroke contributes to the whole picture. If everyone gets it right, the story works. The audience will have empathy for the characters; they’ll laugh; they’ll stay focused through the branding; and they’ll remember the product when it’s time to buy more frozen pizza. In a perfect world, they will even switch brands or try something new.

I was fortunate enough to start my career in a place that took great storytelling so seriously. Everyone was inspired to bring their all to that mission everyday. You couldn’t help but be infected with the idea. The whole office was an instrument of storytelling, even the walls told a story about the people who worked there: writing on the floor reminded you to stop and take in the view; the studios where the video editors worked were wallpapered with old ¾” tapes; creative teams would pop out from war rooms to bounce ideas off coworkers; and always there was the history of the great stories found in some of the greatest ads of all time.

After Jay took the time to let all of us get to know him a little better, he wasn’t so intimidating anymore, just a wonderful leader and mentor. In fact it became fun to swap a quick story with him as he made his rounds, or get his opinion on a rough cut for an upcoming pitch. Empathy connected me to the world of advertising and opened up the possibility of creative expression through the use of sound design. I always strive to find audible details that can complement and say a little more about the images and words the creative teams put together for their stories.

I think the effort of all those different artists is what transforms something from just an ad into part of our culture and history.