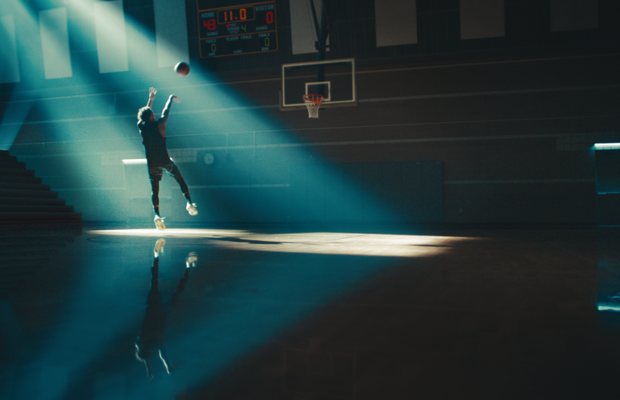 Trae Young’s stand-out achievements and unconventional moves on the basketball court are celebrated in a new marketing campaign from Cartwright that introduces Young’s first signature shoe – the Trae Young 1 – from adidas. The new work will launch in conjunction with the NBA season opener on October 21st, a face-off between Trae’s Atlanta Hawks and rival Dallas Mavericks.

The cinematic ad opens with a mid-court flawless shot from Young as the voiceover talks about Trae’s record-breaking achievements starting as a young 13 year-old ‘hooper’ to his break-out, attention-getting performance with the Atlanta Hawks in the 2021 post-season playoffs. The riff on his many firsts – from first player in history with a 45-point, 11 assist game in the conference finals, to the first to wear shorts to the Draft – takes the viewer on the fantastical journey of what Young has accomplished in his short time in the NBA and why he is so deserving of being called ‘the one.’

“At every competitive level, Trae Young was the 1 who stood apart. Trae succeeded because he always found a way to make himself the 1 in whatever-the-odds,” explained Nate Ripp and Ben Bliss, creative directors at Cartwright. “The City of Atlanta provides a backdrop for the still imagery establishing Trae’s ties to the cultural fabric of the City as seen through iconic locations including State Farm Arena, The Varsity Diner, and the outdoor Central Park Courts where he inspires the next generation.”

The campaign in support of the new shoes will appear on broadcast, online video, social and out of home. Cartwright shot both the video and still imagery at the same time in two different gyms. Directed by Anthony Mandler, the production used three different cameras to capture a wide range of moves and moods. In one scene in the commercial, Trae’s younger brother is seen in the film, demonstrating how Trae is inspiring the next generation of young players.

“Trae is undeniably one of a kind – and his signature shoe is no exception,” said adidas Basketball General Manager Eric Wise.” He embodies the mentality of limitless potential – unafraid to let anything get in the way of his ambition, he pushes boundaries, proves critics wrong and creates new space for himself and the game.”

The Trae Young 1 was developed in close collaboration with Trae himself, designed to support his multi-directional playing style and the unique ways in which he moves on the court. It will be available in five colorways:

- The ICEE Cotton Candy inspired by Trae’s love of cotton candy features a color fade from blue to pink on the upper shoe and the insoles have the opposite color fade.

- SO SO DEF - inspired by the iconic record label from Atlanta.

- SO SO DEF ATL - a colorway of yellow and red inspired by the So So Def logo billboard in Atlanta, with the So So ef logo printed on the heel and sockliner.

- PEACHTREE - inspired by Atlanta’s Peachtree and West Peachtree streets, this colorway has the all-over peach colored upper with hints of green to represent the stem. Georgia Peach is printed on the sockliner.

In commenting on the new shoe, Trae Young said, “adidas and I worked very closely on my first signature shoe and I’m hyped to finally let fans get a hold of them. When you wear these, you’re repping that ice cold mentality and the entire City of Atlanta. This moment is really special as it’s a reminder to the next generation of hoopers that through hard work and focus you can achieve your dreams. Trae Young 1 is a symbol of that for me.”