In this episode, The Lift founder and MD Avelino Rodriguez traces the stories of our indigenous roots through the sacred landscapes of Milpa Alta 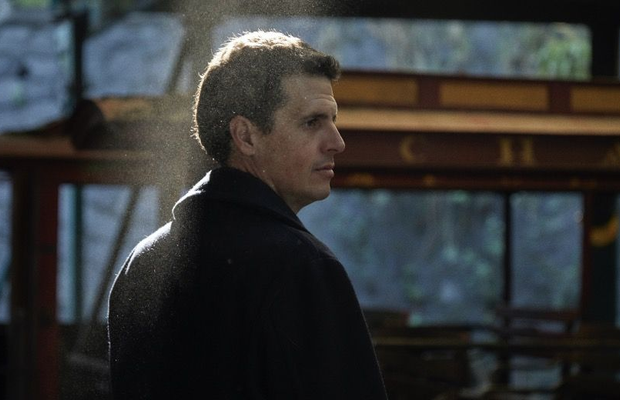 I’ve always found interesting the ways in which cities tell their own story so clearly. They reflect on us the stories of who we are and how we came to be, without trying to hide anything. They show us not only what we do but what we believe in, and how that shapes who we want to be.
Take for instance the iconic Luz Jiménez.  Most people won’t ever have heard her name, but everyone (and I mean literally everyone) in Mexico has seen her at least once. She’s been immortalised in school textbooks and public buildings, like the Monument of the Revolution or the San Ildefonso College. Diego Rivera, David Alfaro Siqueiros, Fernando Leal, and Tina Modotti painted, sculpted, and photographed her to represent Mexico’s historic legacy: our deepest soul.
However, the person behind the symbol remained almost anonymous for most of her life. Most wouldn’t know she was also a writer and an educator, or that she came from one of Mexico City's most interesting communities: Milpa Alta. She was shunned because she dared to pose naked for her country’s sake, but her beliefs left a mark on all of us. Including her detractors. 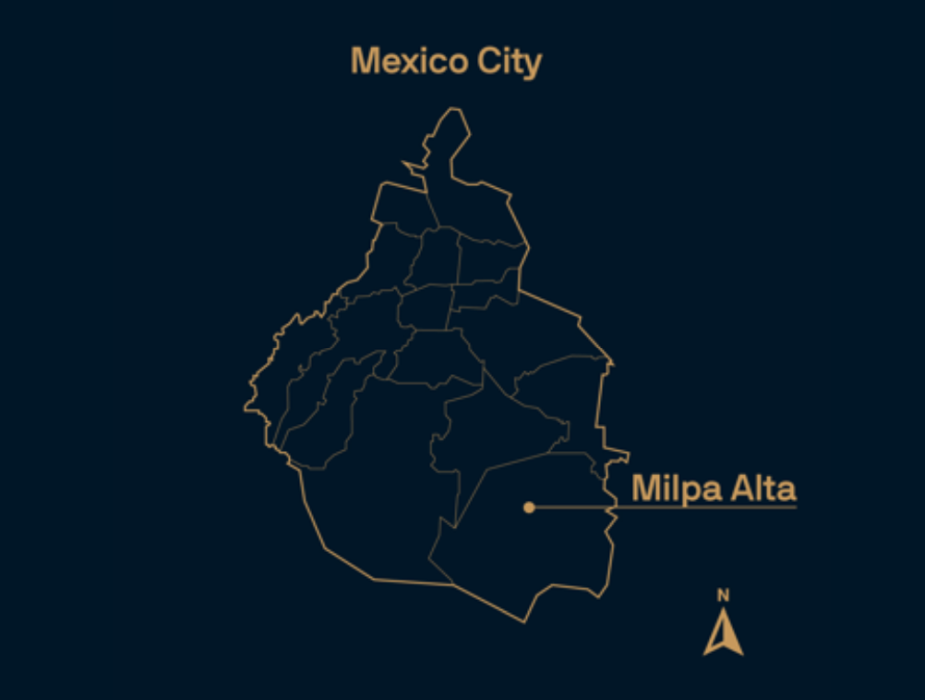 When you go to Milpa Alta, the first thing you’ll realise is that it doesn’t even feel like the city anymore. At all.
At least not the city it is today. Maybe as it was a long time ago. 90% of its territory is completely rural, and it is home to the largest indigenous communities of Mexico City. Interestingly enough, Milpa Alta represents almost 20% of Mexico City’s territory, but it’s one of the least populated.
The views are absolutely stunning, and the food is amazing. Acres and acres of land, surrounded by volcanoes and hills, small towns with both colonial and a few modern buildings dotting the land. The prehispanic, the colonial, and the modern interweave themselves into a visual narrative of our national identity. It’s the kind of story you can actually see, touch and taste. 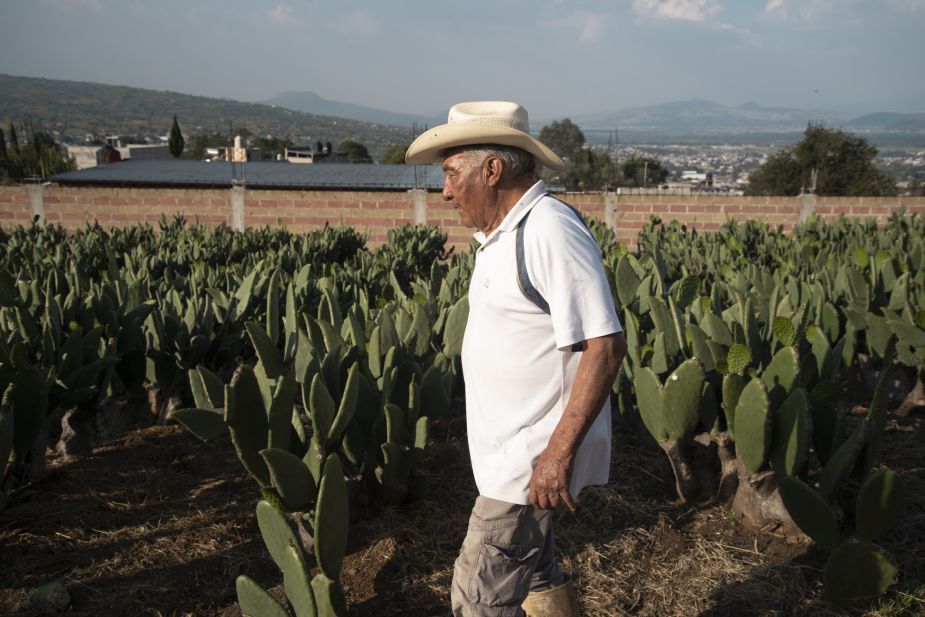 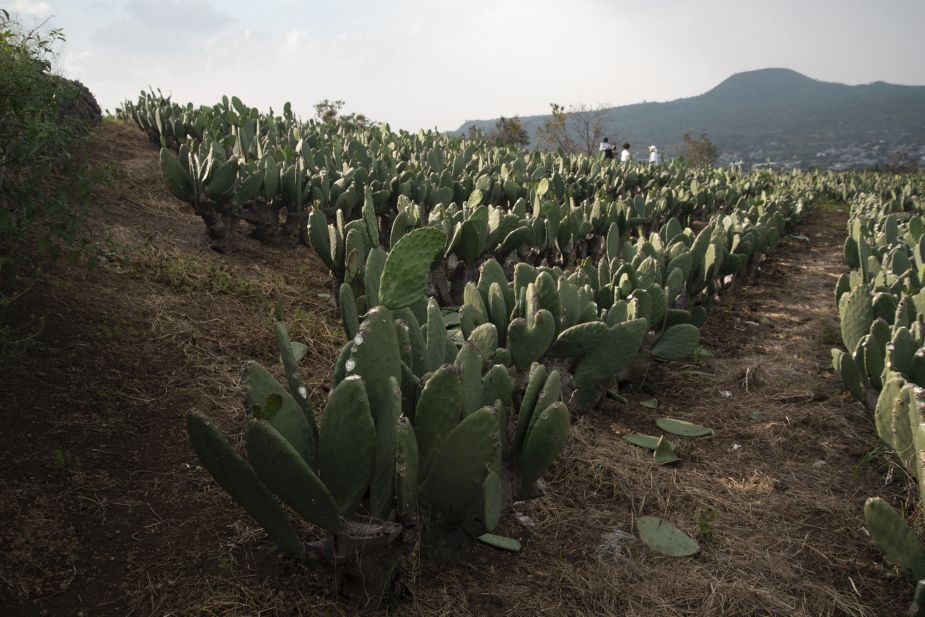 There are many paths to get to know Milpa Alta, but most of them will end up taking you to some form or another of an altar. Milpa Alta’s earliest name, Malacachtepec Momoxco, has usually been translated as ‘Place surrounded by hills’, but more recently also as ‘The hill in the momoxtle’, where momoxtle means altar. And I think its name reflects pretty accurately the people’s deep relationship with the divine. Whether that means mass in church, nahua ceremonies in the forest, or a well-served table, it doesn’t matter: the gods in this land are many, and they all coexist peacefully. A lot of their life in the community revolves around ritual and ceremony, and the spaces where they take place.
The Tecomitl, or ‘Pot of Stone’, is such a place. It actually gives its name to the town of San Antonio Tecomitl. It’s a small, singular chapel that was built on top of a lava bubble. (Yes, you read that right – a lava bubble.) Made of the same volcanic stone, the chapel protects the stone pot where it is said that the ancient inhabitants of Malacachtepec prayed for fertility, and in that way it embraces the past it was built on. The legend of the Pot of Stone is a mystery I’ll leave for you to solve, but it’s very much alive today if you ask around.
Plenty of legends and stories inhabit the same spaces we do, and they live off our beliefs. Humans are creatures of duality, so it’s okay even if those beliefs contradict themselves. Miracles happen right next to magical occurrences, such as the apparition of witches and nahuales. 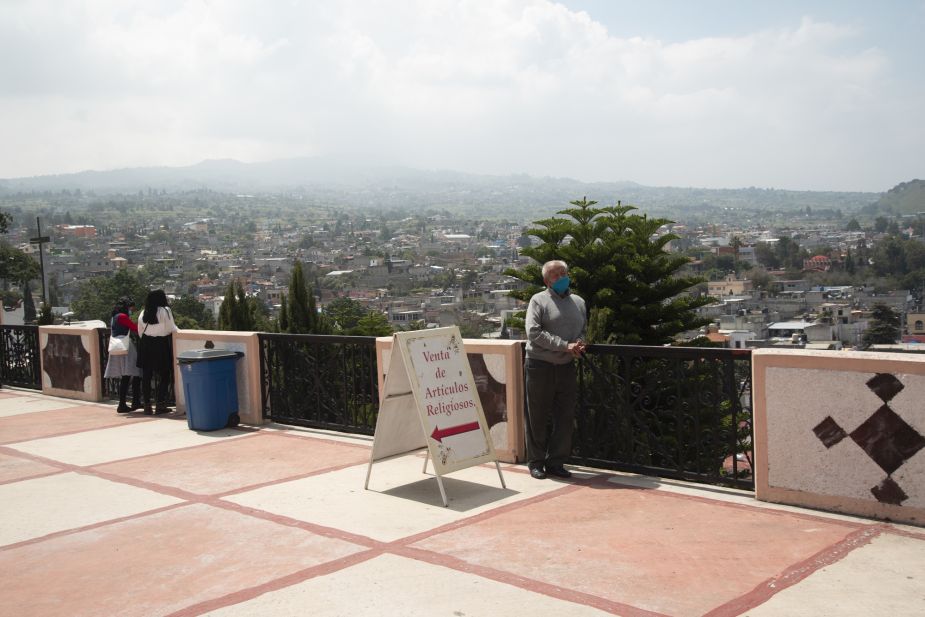 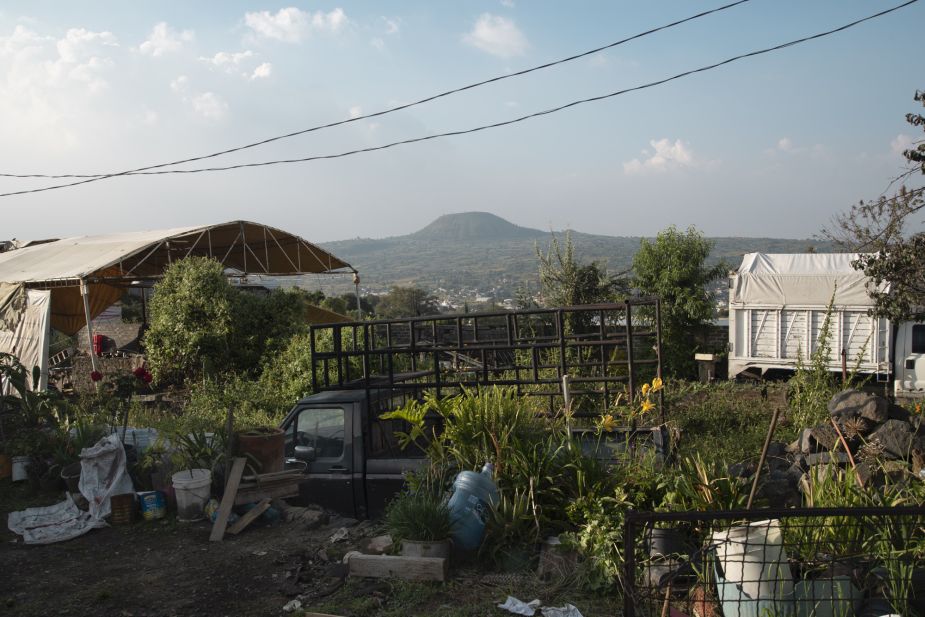 Although the nahual tends to have a bad reputation, their true meaning comes closer to a wise chaman that holds the secrets of nature than that of a thief that can transform into an animal. It’s also a symbol of a millenary culture, and statues abound in San Antonio Tecomitl and San Pedro Atocpan to remind their citizens of their roots.
Some say that the first people were made of dirt. But I think the first Mexicans were made of corn, and that’s what was used to make the black Jesus that stands in the Sanctuary of the Lord of Mercy. The chapel where he resides rests on top of a hill with one of the most gorgeous views of the area. To get there you need to walk from the plaza through Tlaloc street, which will take you to a long, open staircase. That will lead you to a spacious terrace that’s always filled with florists, street vendors, and well-dressed families waiting for mass. It’s almost like a live painting.
Maybe it’s something in the air, but that’s actually the case with most places in Milpa Alta. It's inspiring. The church and ex-convent of San Pedro also make you feel like you’re stepping into a postcard, the type Pedro Páramo would have sent from Comala. Film director Carlos Corrales might have thought the same when he chose it as the setting for his short Barbacoa de Chivo back in 2004. If you haven’t watched it, you definitely should. Everything happens in the atrium of the church, and the way the building itself traps the people behind its gate to commit the unthinkable reflects the deep contradictions of a complex society. 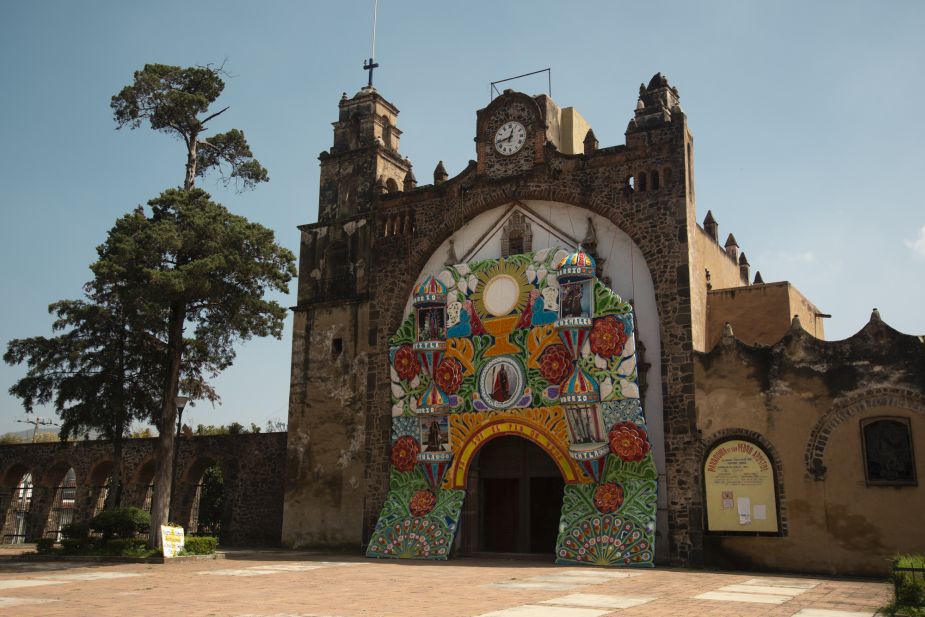 The market right across the street from the church is also almost like a movie set too. It even has a wishing well with the Virgin of Guadalupe right by the entrance, and it’s well taken care of. Although it feels spacious and modern, it showcases mostly traditional delicacies and traditional folklore - the pride of the nahua people. Don Cecilio, who has his shop near the far end to the right, was just telling me the other day about the international visitors they often get for cultural exchanges. He was beaming.
However, if you ask me, it is the nopaleras that best tell the story of these particular people. The nopales extend for acres and acres, like a thorny curtain of vegetation that keeps the urban sprawl at bay. For generations, after the Revolution, they’ve taken care of them. Some nopales are over fifty years old, yet they keep on growing and thriving.
Just like them, the community of Milpa Alta adapts to the times yet stays true to themselves so they won’t disappear. What they do and what they believe in defines their future, and the stories they tell – about themselves, and about the world around them – seem to come alive in the spaces they’ve built and shaped through time.
Where do your stories come alive?
x, Avelino
---
Avelino Rodriguez is founder and MD at The Lift