Paul Chan, CCO at Cheil Hong Kong, on the double Grands Prix-winning campaign that made bullies pay for their actions, quite literally 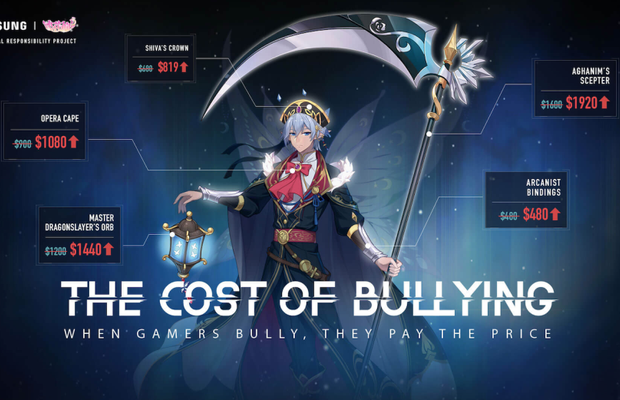 ‘The Cost of Bullying’ for Samsung. Cheil Hong Kong and Cheil Pengtai Beijing hacked the biggest mobile game of the year and made bullies pay for their actions. All in real-time. All within the game. The campaign won top honours at Ad Stars 2021, picking up a Grand Prix in PSA and the coveted ‘Grand Prix of the Year’.

In China, online gaming has exploded.
But so has bullying.
To tackle this toxic behaviour, we hacked the biggest mobile game of the year and made bullies pay for their actions, quite literally.
The more gamers bullied, the more they paid.
All in real-time. All within the game.

Samsung has always promoted the digital safety and well-being for all.
Following the success of ‘BACK2LIFE’ last year (where we got mobile gamers to learn life-saving CPR), our client wanted to launch a new social responsibility project for 2021.
So the initial brief was fairly open.
Our first step, therefore, was to identify a purpose-driven space that has great synergy with the brand.
So we started digging for societal problems that were very much mobile-first.
It soon became apparent to us that with 665 million gamers (Statista 2021), online gaming was exploding in China.
But as a consequence, so was bullying.
According to Comparitech research in 2021, over 79% of gamers have at some point been bullied when playing online.
We were struck by this statistic, and so was our client.
Samsung jumped onboard immediately.
And from that point on, our objective was very clear: We wanted to tackle this toxic behaviour head on.

The real cost of bullying is terrifying.
There’s the immediate trauma that’s felt at the time of the incident.
Then there’s the emotional, health and social impact that can cause significant, long-lasting damage for many years afterwards.
Research has shown that effective intervention (to prevent bullying) can reduce long-term health and social costs for both individuals and society.
So that made us think: When gamers bully, shouldn’t they pay the price?
We narrowed it down to one simple hypothesis: When gamers bully, can we make them pay the price?
As gamers, we also knew that a key part of online games are in-game purchases (also known as ‘MTX’ or ‘Microtransactions’) for weapons, armour and power-ups.
They’re a big deal for gamers.
So building on these two thoughts, we decided to hit them where it hurts.

Working with one of the country’s biggest game developers, we hacked ‘Magic Quest’—the biggest game of the year and China’s equivalent to ‘World of Warcraft’.
A key part of the game are in-game purchases—for weapons, armour and power-ups.
So we made bullies pay for their actions, quite literally.
Since bullying happens within the game’s chatroom, we used the ‘Abusive Language Detection System’ (that already exists within the game) and linked it to the pricing database.
Every time the system detected any sign of bullying, it raised the price for the bully.
The more gamers bullied, the more they paid.
All in real-time. All within the game.

When you put your heart and soul into something and it goes live, there’s always a chance that it just fizzles out. Thankfully, the opposite happened.
The hacked game gave online bullies a real wake-up call.
During the two-week hijack, over one million bullies paid the price. According to the game developer, reports of in-game bullying also fell by 40%.
So it worked.
The thing we love about this campaign is that it goes beyond just awareness and talk.
It’s an example of strategic targeting and going to the heart of the problem. The solve is effective in the very space where the problem exists.
More importantly, the message is loud and clear: There’s a cost to bullying. And now when gamers bully, they pay the price.