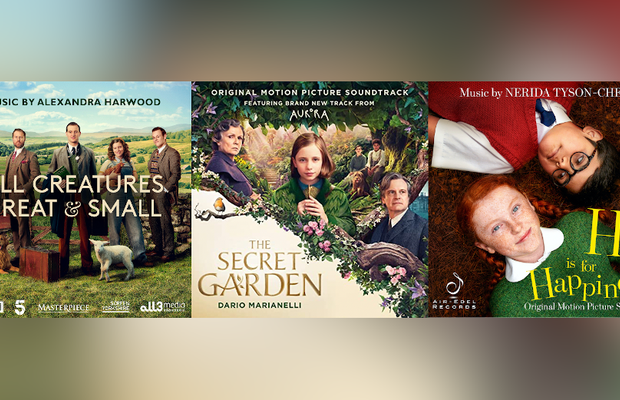 Air Edel composers have been involved in scoring memorable soundtracks for Film, TV, and commercials for 50 years. In this playlist we focus on three productions available on our screens and on digital services this month.

‘All Creatures Great and Small’, with music by Alexandra Harwood, was broadcast on Channel 5 and PBS Masterpiece and produced by Playground Entertainment. The series is available to stream on My5.

The series follows newly-qualified vet James as he leaves his home in Glasgow to come for an interview in the fictional Yorkshire village of Darrowby with irascible head vet Siegfried Farnon. It soon proves a baptism of fire for James as he tries to demonstrate his talent and win over both Siegfried and some of the hard-to-please locals.

The All3Media release of Alexandra’s soundtrack coincided with the broadcast of the final episode.

StudioCanal’s ‘The Secret Garden’, with original music by Dario Marianelli, directed by Marc Munden, will be released in UK cinemas and available to stream on Sky Cinema from 23rd October.

‘The Secret Garden’ starring Colin Firth, Julie Walters and Dixie Egerickx is a new take on the beloved classic novel of the same name written by Frances Hodgson Burnett. Set in England during a new time period in 1947, the film follows a young orphan girl who, after being sent to live with her uncle, discovers a magical garden on the grounds of his estate. Marc Munden is directing the script, which was adapted for the screen by Jack Thorne.”

Described by Vocal Geeks as “…a lightning bolt of joy directly to your soul”, ‘H is for Happiness’ is the story of Candice Phee, a relentlessly optimistic and hilariously forthright, unflinchingly honest girl on the cusp of her 13th birthday. Adapted from Barry Jonsberg’s acclaimed young adult novel, ‘My Life As An Alphabet’, it is a warm-hearted hug of a film, unafraid to tackle serious themes while remaining laugh-out-loud funny and sweetly uplifting.

Air-Edel Records released Nerida’s soundtrack on the 9th October. The film is available to stream on VOD with Samuel Goldwyn Films.

Air Edel composers are available across all media, including Advertising, TV, Film, Video Games, and Theatre.