Creatives behind France.TV’s Tokyo Olympics spot talk through the choices that led them to an action-packed homage to Japanese printmaking 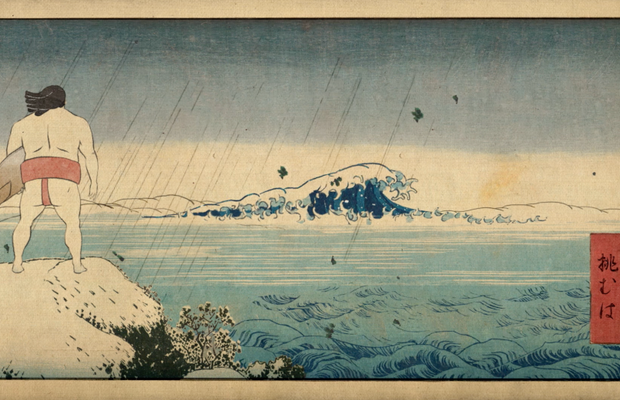 The world’s been waiting too long for the chance to celebrate the 2020 Summer Olympics in Japan. But finally, things seem to be on track for the Games to go ahead. France.TV - the national public broadcaster - and its agency, MullenLowe France, have launched an animated film to mark this moment.
Partnering with illustrator Stéphane Levallois, who was inspired by the masters of Japanese art, notably Hokusai, and his famous 'Wave', the film follows a sumo wrestler (sumotori) travelling through Japan, using its landscapes to turn his hand (surprisingly well) to some of the disciplines that will feature at the Summer Olympics, including surfing, skateboarding, athletics and basketball.
LBB’s Alex Reeves spoke to Jordan Lemarchand and Antoine Colin, creative directors at MullenLowe France.

LBB> What was the initial brief? Was it way back in the pre-Covid times?

Jordan & Antoine> Flashback: March 2020, as the health crisis hits the world, the International Olympic Committee (IOC) announces the postponement of the Games of the XXII Olympiad in Tokyo, four months before the opening ceremony. At that time, the MullenLowe France agency and the Mikros teams were already well advanced in the creation of the new France Television’s TV spot, which would announce the group's programming dedicated to the Olympic Games.

LBB> How does the central idea respond to that and how did it evolve over time?

Jordan & Antoine> The aim was to highlight Japanese culture, the values of the Olympic Games and the new disciplines that would make their debut at the Summer Games, such as skateboarding, climbing, basketball and surfing. All this in a 2D animation film, using Japanese prints as a reference. Timeless values in a dreamlike world.

LBB> How did you decide to work with Stéphane Levallois?

Jordan & Antoine> Stéphane Levallois was an obvious choice. When Mikros presented him to us, we were very enthusiastic, he was the ideal candidate. Coming from the world of comics and the seventh art, Stéphane Levallois is a master in illustration. His vision of the sumotori was fundamental for the development of the animation, to find the right balance between movement and flexibility.

LBB> Hokusai and his famous 'Wave' is probably one of the first images that come to mind when people think of Japanese art. Why was that the right visual reference?

Jordan & Antoine> Printmaking is a Japanese art movement that represents the Edo period, the former name of Tokyo.
It is not only popular but also original. We wanted to address everyone by using these beautiful images and bring them to life through animation.
We had a long discussion with Stéphane Levallois about the history of Japanese drawing and settled on ‘The Wave of Kanagawa’ by Hokusai as our main reference. It’s world-famous and translates to ‘old drawing fool’, so seemed like the perfect fit.

LBB> How did you develop the story and end up settling on the various sports that the sumotori performs in the film?

Jordan & Antoine> Five new disciplines will make their appearance at the next Summer Olympics: surfing, karate, skateboarding, climbing and softball. It was important for us to highlight them. We therefore decided, in the interests of integrity and aesthetics, to focus on surfing, skateboarding and climbing in this film.

LBB> What guided your thinking when it came to the music?

Jordan & Antoine> We were looking for music that was Japanese, rhythmic, and modern at the same time. The sumo movements had to be given momentum. We knew that traditional Japanese musicians sometimes collaborated with modern Western musicians to create new styles of Japanese music influenced by the West.
That's how our Japanese soundtrack came about.

LBB> What were the biggest challenges in the process?

Jordan & Antoine> For the film to be successful, it needed a specific team capable of executing the agency's vision based on highly developed art within the required budget and timeframe... it wasn't going to be easy. What made it possible was that we were lucky enough to work with Mikros MPC, who themselves were blessed with a wealth of exceptional talent, which is unique in the market today.

LBB> What's your favourite moment in the finished piece?

Jordan & Antoine> It's not every day you get to ride the wave of Hokusai!

LBB> What are you looking forward to most about the Games?

Jordan & Antoine> That the Olympic Games take place!
Check out this accompanying story if you’d like to find out more about the animation craft behind the film.