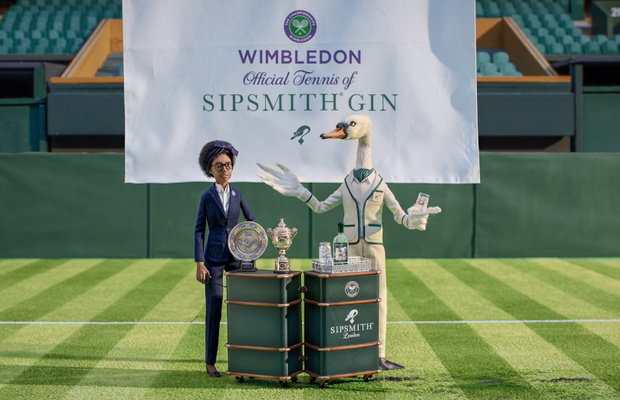 Sipsmith celebrates its first year as the Official Gin Partner of The Championships, Wimbledon with a new piece of creative, where Mr Swan returns to our screens with his Centre Court debut. In this second campaign created again in collaboration with Ogilvy, Sipsmith’s loveable stop-motion character Mr Swan, mistakenly announces, with boundless enthusiasm that ‘Wimbledon is The Official Tennis of Sipsmith Gin’.

The creative perfectly captures the love match between these two iconic British Brands, both champions of excellence with their unrelenting pursuit of greatness and yet whilst they take what they do seriously they never take themselves seriously.

Following on from the success of Sipsmith’s debut film, this creative is again produced using the skilled craftsmanship of stop-motion animation, with the same Director Jeff Low and voice of Julian Barrett. This time, Mr Swan is at Wimbledon and joined by his partner, Ani, who patiently attempts to correct Mr Swan throughout his whistle-stop tour of the famous All England Lawn Tennis Club.

Shelley Macintyre, senior global marketing director, Gin, Beam Suntory, said: “What better way for Mr Swan to make his comeback than celebrating the coming together of Sipsmith and Wimbledon as partners? It's a delightful celebration of two quintessential brands that go to extraordinary lengths to delight their clientele. A shared attention to detail, combined with Mr Swan's idiosyncratic quirks make this not only the perfect partnership, but a lot of fun too, which is what we’ve tried to capture with Mr Swan and his partner, Ani."

Jules Chalkley, ECD Ogilvy UK, said: “Bringing back an overly excitable and confident Mr Swan with his unique view of the world, allows us to use his cheeky and super disruptive humour to celebrate what is an incredible partnership between two British super brands in what is to be a busy sporting summer.”

Jeff Low, director, said: “It was a privilege to get to make another film for Sipsmith with our missguided friend, Mr Swan. I hope audiences enjoy it so we can make it a trilogy.”

Sipsmith’s Wimbledon campaign will be served in a variety of TV formats (60s, 30s and 4x10s), launching on June 21st, a week before The Championships, Wimbledon goes live, on TV and VOD. A suite of social assets with Mr Swan commenting on traditions went live from June 14th and will be released throughout the event.