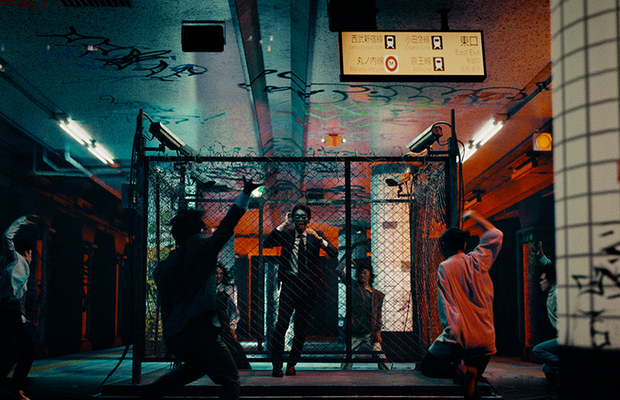 ​Previous shoots involving background composition included challenges such as the necessity to perform and shoot using backgrounds like green screens while imagining how things would look after composition. It was difficult to grasp the full visual picture using this method. Furthermore, it required long composite editing times after shoots.

​In-camera VFX LED virtual production is a method of filming that installs high-definition LED displays throughout a studio to project photorealistic, three-dimensional computer graphics created with Unreal Engine onto a background. This method is actively used in Hollywood film productions. Shooting in an immersive space has advantages like making it easier for actors to perform and for light to blend with subjects. It also allows filming beyond the limitations of season or time of day and the use of elaborately planned, constructed sets. Because the location does not need to change, in-camera VFX is one filming-method that serves as a solution under present conditions in which the Covid-19 pandemic makes traveling difficult.

​Real-time rendering technology can be used not only for shooting films but also in live streaming. High-quality compositing is possible, and the technology can offer the audience a unique experience.

​The key to success with in-camera VFX filming is the method's pursuit of realism, which comes infinitely close to erasing the boundaries between real and virtual. Several test shoots were done in the preparatory phase at Hibino VFX Studio, a virtual production studio offered by Hibino. Repeated trials for all sections, including lighting, set construction, and filming, were an opportunity to combine knowledge across different teams. Repeating enough tests to establish a work flow made it possible to finish a shoot with many cuts in two days. The production companies attempted methods of expression that could only be done thanks to in-camera VFX, such as by using a rotating base in front of an LED display and using fine wire mesh as a set piece, which makes background compositing difficult on a green screen. Another noteworthy point was that scene changes could be made within a single cut by modifying the computer graphics projected on the LED displays.

​AOI TYO Group’s AOI Pro. and TREE were able to achieve a more seamless video production by building a virtual production system and working together. The music video was filmed at TREE’s Media Garden studio. CRANK provided the shooting equipment; LUDENS and REALIZE supervised the production of three-dimensional computer graphics and virtual production; and DIGITAL GARDEN was responsible for grading, online editing, and multitrack audio. LUDENS and REALIZE participated from the planning stage, supervising and coordinating with the crew to successfully express effects that are unique to virtual production. They committed themselves to optimizing scenes depicted in real time and guaranteeing quality.

​AOI Pro. will continue proactively to adopt new technology, including virtual production, and take on the challenge of innovative video production.

Behind the Scenes: SHISEIDO Holiday 2020