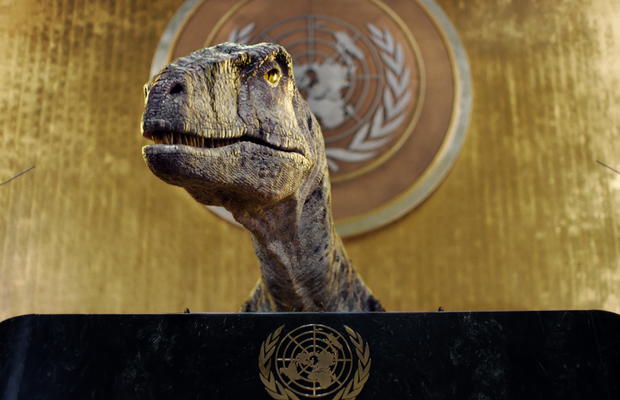 The United Nations Development Programme (UNDP) has brought a ferocious, talking dinosaur to the United Nations’ headquarters to urge more climate action from global leaders, in a short film launched as the centrepiece of the organisation’s new ‘Don’t Choose Extinction’ campaign.

Bursting into the iconic United Nations General Assembly Hall, famous for history-making speeches by leaders from around the world, the imposing dinosaur tells an audience of shocked and bewildered diplomats and dignitaries that “it’s time humans stopped making excuses and started making changes” to address the climate crisis.

The film introduces the key issue of the campaign; the world is spending hundreds of billions of dollars on fossil fuel subsidies, while billions of people live in poverty. Priorities must shift if humanity and earth are to survive. The global pandemic has shaken us all, but it also provides a unique opportunity to re-imagine the future as a sustainable green future for all. Don't Choose Extinction’ UNDP’s way of raising awareness around this monumental challenge.

Through the campaign UNDP is sparking a global conversation and urging people worldwide to take urgent climate action to help ensure we collectively meet the ambitions of the Paris Climate Agreement and the Sustainable Development Goals (SDGs.).

Boaz Paldi, global partnership and engagement manager for United Nations Development Programme explained: ‘With this initiative, we want to spotlight the climate crisis and at the same time energise the debate about some of the economic solutions that are out there to get us on a path to de-carbonisation. Addressing fossil fuel subsidies is a critical issue in the fight against climate change. The campaign gives hope that despite the trajectory we seem to be on there is still time to act and solutions to fight for. Creativity and technology are two of the necessary tools we need to achieve the Sustainable Development Goals by 2030 and move towards a green transition. It’s why we needed the best minds in the industry to partner with us in our journey to make these goals a reality.”

Activista, a purpose-driven creative agency based in LA, led the strategy and creation of the 'Don't Choose Extinction' platform including the launch of the film, which was written in collaboration with David Litt, Obama’s speech writer whilst in office. This first-ever film to be made inside the UN General Assembly using computer-generated imagery (CGI) features global celebrities voicing the dinosaur in numerous languages, including actors Jack Black (English), Eiza González (Spanish), Nikolaj Coster-Waldau (Danish), and Aïssa Maïga (French). The short film has been translated into 32 languages and counting.

“It's not every day you have the opportunity to work with the UN Development Programme, let alone tackle the biggest threat humanity is facing. But Activista was born to take on challenges like this. It's a monumental task, and we have been humbled by the chance to make the campaign of our lives. This campaign came together through a collaboration with some of the most talented professionals from across the world, all working tirelessly to bring this project to life. It was an honour to work with such a dream team”. Paco Conde and Beto Fernandez, ECDs and founders, Activista Los Angeles

Activista also partnered with Framestore Pictures and Oscar-winning VFX studio Framestore to deliver the shoot and Computer-Generated dinosaur for the film. Having worked closely together 20 years prior on the BBC Emmy Award-winning docuseries, Walking with Dinosaurs, Framestore Pictures director Murray Butler and Framestore creative director Marco Marenghi, were a perfect duo to bring the striking Utahraptor to life. Butler and Marenghi developed the look and feel of the menacing creature with a world-class team, delicately striking a balance between anthropomorphism and realistic behavior. The dinosaur was beautifully brought to life through music composed by Oscar winner Rachel Portman OBE, the first ever female composer to win an Academy Award, with String and Tins creating the final audio.

“We studied the way great speeches were delivered in film and TV and approached this project with the same cinematic language (just with a dinosaur as the orator). We opted to use two cameras, which enabled us to covertly capture spontaneous reactions and cover action from a variety of levels and angles throughout the Hall. The stirring musical score, our computer-generated dinosaur hero, and the UN staff members and delegates who volunteered their time to play the role of the audience each brought this incredible film to life for an important cause.” Murray Butler, director at Framestore

Jim Stewart, sound designer, String and Tins comments: “It was a pleasure to be involved in the UNDP’s Climate and Inequality campaign. While it has its cinematic moments and an amusing rug-pull, the sincerity of the message remained paramount - a warning for humans from a dinosaur’s perspective. Whilst working on the Utahraptor’s voice over, we spent a lot of time drawing a fine balance between the message remaining human and the sound feeling realistic. For us it was fun not having to follow the cinematic cliché of a dinosaur introducing itself to the audience via a deafening guttural roar. Instead we created intimate throat gurgles and sharp nostril flares to portray the beast’s foreboding mood. We’re looking forward to the film and it’s message being heard around the world!”

The campaign has been designed to address multiple common excuses around why things can’t shift on climate change. To curb inaction, the film leads viewers to a digital behaviour-change eco-system called The World of Excuses, created by Wunderman Thompson Australia. The digital experience aims to help motivate individuals from apathy to understanding, and ultimately action, by arming them with inspiration, tools and experiences as they navigate the digital World of Excuses.

More from String and Tins

Soundscaping a Whimsical World of Penguins, Aliens, Zombies and a Human Bear

Producing Can Be Very Lonely: Why the Production Community Craves Conversation