The Great Drought: How Great Guns’ Roar Uthaug And Manchester City Created A World Without Water

The Tomb Raider director talks LBB through his starkly dystopian campaign for Xylem, made with the help of Manchester City FC 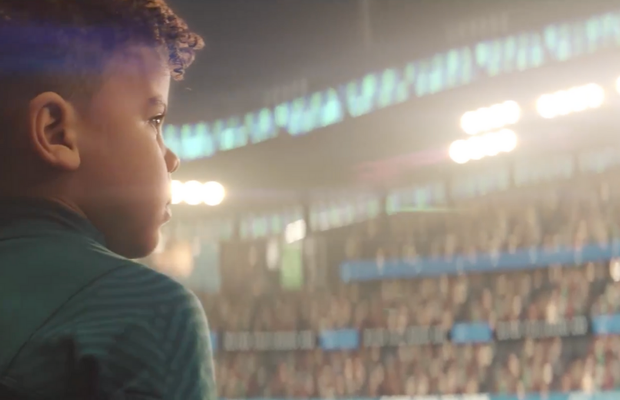 When Great Guns’ Roar Uthaug began work on a film warning about a possible ‘end of football at the start of the year’, he didn’t expect his cautionary tale to turn to reality quite so quickly.

Made together with the creative agency Brave, the campaign for the water provider Xylem draws on the star talent of Manchester City FC to lay bare the consequences of a world without water. With its story taking place over a quarter of a century, the three-minute film shows a dark future for the beautiful game in a world with limited water supplies. The film ends on a call to action to conserve water.

In the context of a global pandemic, the film has taken on a grim new realism. Its key message of acting now for a better future, however, strikes an even more urgent tone.

To talk through how the film was made, Roar Uthaug spoke to LBB.

Above: The film’s narrative takes place over 25 years, and in a neat touch sees current City midfielder Phil Foden take up the role of the club’s coach.

LBB> Congratulations on a great campaign! What can you tell us about how you got involved?

Roar> Thanks! I worked on a Panasonic campaign with the folks at Brave last year and we had a great time collaborating, so hopefully that's why they came back to me with this project.

LBB> Partnering with a football club is a fairly unique way to communicate this message. Is that something that excited you about the project?

Roar> I have to admit that I'm not the biggest sports fan, but as an old heavy metal head what I can relate to is that burning enthusiasm for the thing you love - and the collective spirit that comes with it. And of course it was fantastic to have the reach that Manchester City has when trying to get such an important message out there.

LBB> How closely does the final film resemble your vision at the start of this project?

Roar> I feel we ended up very close to what we set out to make. Thanks to a great cast and crew, and not at least to the hard work of Coffee & TV who did the post.

LBB> Humour is something that you use brilliantly in a lot of your work, and it’s even present in a hard-hitting campaign like this. What makes humour such a powerful tool to communicate a potentially heavy message?

Roar> Thank you. I think what's great about humour is that it can take the edge of a serious message so that you're not feeling like you're being preached to as an audience. It's almost like a Trojan horse where you pull the audience in and get them engaged, and then you surprise them with the message making the impact really powerful.

LBB> The campaign was all put together before we saw the extent of Covid-19’s impact. Do you feel this ad hits differently in a post-pandemic world?

Roar> Definitely. Now that we actually have witnessed the end (at least for a while) of football, concerts, cinema and so on I think the story is suddenly brought a lot closer. We have gotten a glimpse of that future and I don't think it's something anyone would want, for themselves or the little ones that we're passing this on to. So hopefully the motivation to also do something about our water challenges will be a lot stronger now.

LBB> And, more broadly, do you think the pandemic is redefining what we might see as ‘dystopian’?

LBB> Phil Foden is a natural as City’s future manager! How was the casting process for this spot?

Roar> Actually we didn't know what players we were going to get until a few days before shooting. Luckily, Foden was perfect for the part and fit nicely with the theme of the young generation carrying the torch. The rest of the actors we cast locally in Manchester as we were aiming for a naturalistic approach to the dialogue and interaction in the scenes.

LBB> What was the most difficult component of this ad, and how did you overcome it?

Roar> The most difficult was probably only having 45 minutes of shooting time with the City players. And that included a wardrobe change on Foden. But you just have to go in there with a very clear battle plan.

Roar> It's not often you're given the opportunity to do a 3 minute spot, spanning 25 years on a subject this important. I feel grateful for the opportunity, and enthusiastic about the reception we have received since the release. Collaborating once again with the fantastic team at Brave with Great Guns’ production backup allowed me to focus on delivering this important message. Now I just hope that people will turn off the tap when they're brushing their teeth so we still can enjoy football and concerts in 2045.