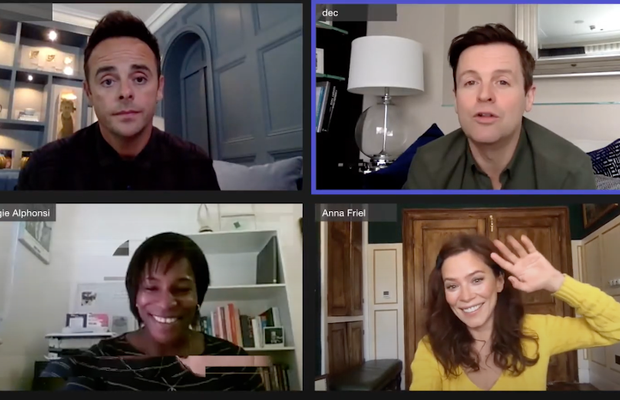 Tonight, ITV’s landmark mental wellness campaign 'Britain Get Talking' brings together some of the nation’s most loved stars in a rare video call moment reinforcing the importance of staying connected and reaching out beyond your inner circle.
Covid-19 is one of the most challenging times our nation has faced in recent history and its effect on our mental health is and will continue to be hugely significant. Through an epic video chat, ITV continues to spread the vital message of looking out for one another, encouraging everyone to keep talking in this new campaign created by Uncommon.
The initiative, which launches at the start of Mental Health Awareness Week (and fitting in with this year’s theme of kindness), sees a roster of over 20 famous faces joining forces in urging the public to not just talk to their nearest and dearest, but also reach out to people not expecting your call. The elderly uncle or aunty who’s self-isolating, the quiet guy at work you see from time to time, the old friend you’ve somehow lost touch with or those who live alone.
The poignant message invites viewers to remember them, reach out and let them know you care. We see the celebrities in an authentic way, from inside their homes with the natural interruptions and usual technical glitches, we have all found during lockdown on group video calls. The recognisable faces leave us with a powerful action to think about: ‘Because the ones not expecting your call could be the ones who need it most. Show a friend you’re thinking of them. Britain Get Talking.’
The film will debut on ITV and STV in the ad break for Harry’s Heroes: Euro Having A Laugh just before 9pm and is supported by charities Mind and YoungMinds. Coming together to raise awareness in this special call are: will.i.am, Gordon Ramsay, Anna Friel, Jim Carter, Laura Whitmore, Tinie Tempah, Maggie Alphonsi MBE, Phillip Schofield, Holly Willoughby, David Walliams, Lorraine Kelly, Harry Redknapp, Davina McCall, John Barnes, Julie Etchingham, Iain Stirling, Emma Willis, Jason Watkins, Sheila Hancock, Charlene White and Ant and Dec.
Ant said: "We are huge supporters of ITV's Britain Get Talking 2020 campaign which has been highlighting the importance of people connecting, even more so now than ever. It’s incredible that as a result of the campaign more than six million people have got in touch with someone so far.” Dec added, "So for this Mental Health Awareness Week, we're stepping it up another notch and asking people to reach out beyond their immediate family and close friends.  Who could you reach out to who might really appreciate it? Britain, let’s keep talking."
The new campaign comes as ITV research carried out by YouGov showed that 55% of us are more worried than usual about our families’ mental health, and 57% of us are more conscious than usual of the need to look after our mental wellbeing. But the lockdown has also had a positive effect. One third of people say they’ve got back in touch with old friends and family since lockdown began.
Clare Phillips, director of social purpose at ITV, said: “The Britain Get Talking campaign has been playing an important role in encouraging all of us  to stay in touch and talk with each other, especially as over half of Britons are more conscious of the need to look after our mental wellbeing at the moment. With kindness as the theme of Mental Health Awareness Week, we’re upping the level - let’s reach out to those who might not be expecting a call, as they might be the ones who need it the most.”
Since its return on 21st March, Britain Get Talking has seen over 6.1 million people take immediate action to text or call a friend or family. It has been found in independent research to be voted the most emotionally engaging ad in the wake of the Covid-19 pandemic, and has been seen by over 70% of adults in the UK, with an outpouring of support from over 100 celebrity faces and featuring over 300 members of the public. Nearly half of those who’ve seen the campaign say it’s made them feel better in general, and 37% of those who’ve seen it say it’s made them feel more connected to family, friends and the nation at this difficult time.
Paul Farmer, chief executive at Mind, commented: “This is a Mental Health Awareness Week with a difference. Many of us are worried about Coronavirus and how it will affect us and those we love and, for those of us with existing mental health problems, we may never have felt more isolated or alone. It’s fantastic to see the Britain Get Talking campaign getting the message out there that we need to keep connecting and supporting each other through this, for the benefit of our mental wellbeing.”
Emma Thomas, chief executive at YoungMinds, concluded: “These are challenging times for all of us and we know that it’s a particularly important time to be aware of our mental health and doing what we can to look after ourselves and the people we love. That’s why we’re proud to be a part of Britain Get Talking, which is reaching a huge and diverse audience with the simple message that reaching out to others can make a positive difference to our wellbeing.”