Star studded campaign from adam&eveDDB reminds lottery players that ‘When you play a little, you help our athletes a lot’ 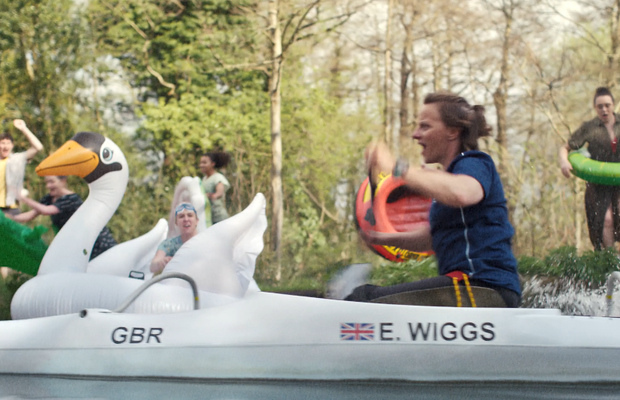 Running across TV, Radio, Digital and high-impact OOH – as well as on all owned National Lottery channels and in 44,000 National Lottery retailers across the UK – the campaign first airs on Wednesday 7 July, with the new blockbuster TV ad premiering in a 30” spot during England v Denmark, and with further primetime ad slots throughout the week – including during the Euro Final on Sunday, Coronation Street and Love Island.

The athlete-studded blockbuster TV ad – which features sprinter Jonnie Peacock MBE, wheelchair tennis player Jordanne Whiley MBE, taekwondo athlete Lutalo Muhammad, discus thrower Dan Greaves, paracanoeist Emma Wiggs MBE and race walker Tom Bosworth – sees members of the public across the UK comically trying to lend their support to the athletes by making cups of tea, attempting to put them through their paces (badly!), and gathering up household items for them to practice with (such as piles of plates for discuses). As the ad draws to a close, a voiceover from Dermot O’Leary declares: “There is an easier way to support our athletes. Just play The National Lottery. When you play a little, you help our athletes a lot.”

Alongside the unmissable core campaign, advertising for the individual National Lottery games will be badged with the Team GB and ParalympicsGB logos, and the Lotto ‘It Could Be You’ TV ads will be updated with a Tokyo twist – meaning that, at every National Lottery touch-point, players will be reminded of the part they play in funding our athletes. Players will also be given more chances to win with a special edition Gold Scratchcard and special event Lotto and EuroMillions draws. And then, as the Games begin, the advertising will shift to celebrate gold medals as they happen in real time – putting National Lottery players at the heart of every triumph.

Camelot’s chief marketing officer, Keith Moor, said: “Through the scale and reach of this campaign – The National Lottery’s largest ever – we want players left in no doubt of the role that they play in supporting our Olympic and Paralympic athletes. Our blockbuster TV ad – starring an incredible group of our Team GB and ParalympicsGB heroes – will be followed by high-impact out-of-home, an unmissable retail presence and thumb-stopping stories on digital. Then, as the Games get underway and the medal count begins, we’ll plant ourselves at the heart of Team GB and ParalympicsGB triumphs to remind the nation that our athletes’ success is built on play.

“Over the course of this momentous summer of sport, National Lottery players should feel incredibly proud of their contribution, so we’ll be connecting purpose with play at every possible opportunity. We truly can’t wait to collectively celebrate all of the winning moments.”

The TV ad was created by adam&eveDDB, with media planning and buying done by Dentsu.