Air-Edel composer, producer and session player Ale shares his drive for sound, the distraction of emotion in music and why sound is the only thing 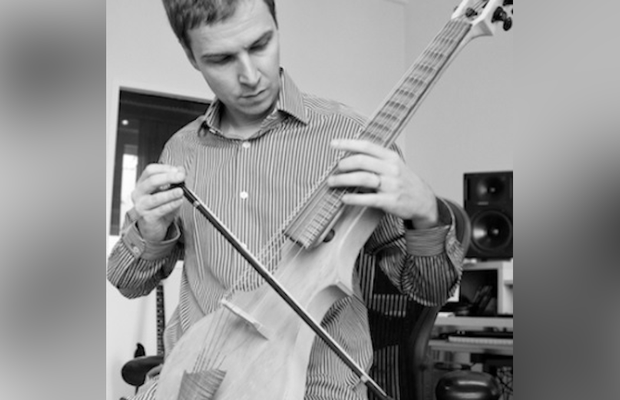 Ale Martí is a composer, producer and session player based in London represented by Air Edel.

With a unique voice as a composer and guitar-player, supported by an eclectic collection of stringed instruments, Ale creates music for film and television. Recent projects include the BBC’s teen series ‘Almost Never’, Guillermo del Toro’s ‘Antlers’, Ron Howard’s ‘Genius’ series, and the biopic ‘Escobar’, starring Javier Bardem and Penelope Cruz. His distinctive soundtrack style features instruments such as guitarviol, prepared piano and Weissenborn, while his background as a sound engineer and pop-band front man adds to his range and versatility in the studio.

Outside the film world, Ale’s work includes personal projects — such as his new album Ariadne — as well as trailers, film library music and ads.

I remember having a conversation with a composer friend of mine who had more of a "formal" music education, and we were discussing how "sound" or "production" has taken over from the music sheet driven era. The conversation ended when I pointed out that you don't get to give the audience a music sheet to follow the score; you only affect them with sound.

Listening to sound is what drives me. I surround myself with instruments of all sorts and noise-making machines and work a lot on having great sounds ready at the tip of my fingers. I make these massive templates as starting points for different projects; everything EQ'ed and ready to go; analogue synths, samples, drums, guitars, basses, stringed instruments, pianos…

That triggers music in me, great, immediate sounds that I can use without thinking much about it. Having an inspiring pallet of compelling stuff ready to go is the starting point I need.

I've been lucky enough to write music for great brands like McDonald's, Vodafone, Coca-Cola, or Loewe, working with unique agencies like McCann, BBDO, Saatchi & Saatchi or Mother. For me, the most satisfying part of all these projects is always the late stages of mixing. Everything sounds great. I have settled with a composition I love, sounds that I love and that I think deliver the necessary emotion, and everything sounds fantastic; I'm almost there. So every time I play the mix to give it the final touches and the closer I get, the more distracted I get with just feeling that emotion instead of actually doing any mixing, so that's when I know I'm done.

The final format or usage for the music always makes a difference in what and how you are writing. Maybe you are mixing surround, so you want to make sure you have certain mics recording that you can then use in the surround busses, or you know that there is going to be a voiceover on top of the music, so you want the right emotion, but without calling for all of the attention. Maybe not clogging the frequency spectrum where the voiceover or FX will sit on in your arrangement are things you always have to consider.

But in any case, it doesn't factor in the quality of whatever you are working on; there's a message that needs delivering, and it's my job to get it across in the most engaging and compelling way.

I'm very eclectic in my taste of music and enjoy lots of different genres and styles; I mostly listen to music online through my studio monitors and try to keep up with new stuff coming out, which can be relentless.

Every city has a sound to it; if you pay attention, it's pretty remarkable. Everything has a sound; the language has a sound, cities resonate in specific ways, the architecture makes noise bounce differently, cars are different, people do various activities, churches, cooking, customs, it's fascinating. It's quite magical when you get to a new city to stop and take a moment to listen to it.

My relationship with sounds and music has, interestingly, become more intense in the last few years. I'm doing the best work I've ever done, and I'm happier than ever with my productions. Technology has evolved massively over the last decade, and that combined with a deeper understanding of how to tell a story makes these inspiring times for me. I have a lot less time to work than before (I have two small children now), but it has never been as exhilarating as now. Good things ahead, I hope!