Beetroot Music's co-founder on the importance of the ideas process, diverse music heroes and the interconnection between film and music 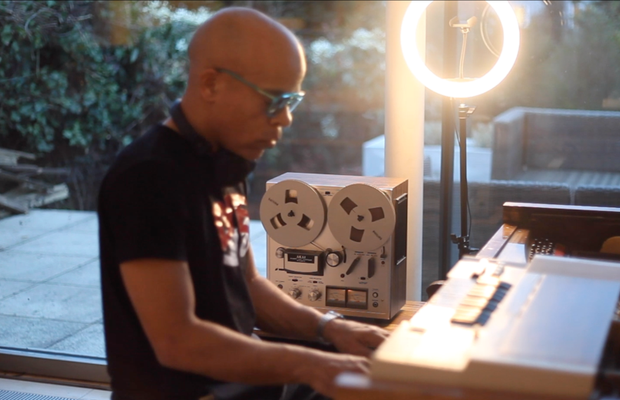 Vince Pope has built an outstanding reputation as both film composer and releasing artist, creating music at the intersection of sophisticated neo-classical melodies and flawless electronics and beat production. With credits ranging from Black Mirror to Aisling Bea’s This Way Up, Vince perfectly describes the full range of human emotion in his scores.

In 1999, Vince co-founded Beetroot Music and began writing music for television commercials. Over the past decade, Vince has worked on numerous high profile campaigns for brands including Nike, BMW, Guinness, Honda, John Smiths and Walkers, winning several prestigious industry awards along the way.

LBB> When you’re working on a new brief or project, what’s your typical starting point? How do you break it down and how do you like to generate your ideas or response?

Vince> The mood and feel of the piece is crucial - what the director is trying to say - and equally to understand what the creatives / producers have in mind when they talk about music. It's one thing to talk but often to provide examples ahead of the composing process allows me actually understand what the commissioners have in their minds

LBB> Music and sound are in some ways the most collaborative and interactive forms of creativity - what are your thoughts on this? Do you prefer to work solo or with a gang - and what are some of your most memorable professional collaborations?

Vince> I have worked with pretty much all the great sound houses in London - it's critical to have that trusting relationship - where we are able to experiment and push ideas back and forth. Composing itself can be a pretty solitary process so I like to collaborate and work with creatives during that process as much as is possible - deadlines permitting

LBB> What’s the most satisfying part of your job and why?

Vince> Probably when in the final mix when all the sound is coming together and the picture is on its way to the final graded (certainly locked) version. That moment when you hear and see your work in the most sympathetic environment is always a buzz. Big speakers and bigger monitors please.

LBB> Who are your musical or audio heroes and why?

Vince> Musically my hero are very diverse from Marvin Gaye to Future Sound of London to Stravinsky - really across the board - though perhaps what might connect them is a desire to push themselves into areas that are new without always doing what I comes easily - I think becoming comfortable is the enemy of creativity and invention - there is always so much inspiring new music coming along too. I was lucky enough to see Miles Davis and he really personified that desire to never stand still -

LBB> And when it comes to your particular field, whether sound design or composing, are there any particular ideas or pioneers that you go back to frequently or who really influence your thinking about the work you do?

Vince> I think Johann Johannsson has been an inspiration - gone far too young. Nicholas Brittel is also doing some beautiful work. What I like there is the mixing of genre and form. Again they both stein at the edges of particular genres be it classical or jazz.

LBB> When you’re working on something that isn’t directly sound design or music - are you the sort of person who needs music and noise in the background or is that completely distracting to you? What are your thoughts on ‘background’ sound and music as you work?

Vince> I’m not sure why I would need background music, I definitely listen to a lot of music and have special playlists for certain activities  - if you like - but what I listen to when I’m snowboarding hopefully complements my boarding - makes it possibly even better if you like, than something that sits passively in the background - I mean listening to the Foo Fighters coming down a black run has got to improve my boarding don't you think ? Then again that wouldn’t sit quite as well in the hot bath afterwards. And actually Bach is my go to music for writing or reading  - so maybe yes music can kinda sit in the background too, hmm , who knows.

LBB> I guess the quality of the listening experience and the context that audiences listen to music/sound in has changed over the years. There’s the switch from analogue to digital and now we seem to be divided between bad-ass surround-sound immersive experiences and on-the-go, low quality sound (often the audio is competing with a million other distractions) - how does that factor into how you approach your work?

Vince> Well I’m not actually that worried by it because I do believe that the music and sound will transcend the medium its played on - I mean bad music won't change or be “better” if its played on a great system and hopefully great music - well it will shine through even on a shit system. But don't get me wrong I’d rather listen on a thought out balanced hi end system than a laptop speaker - who wouldn’t ?

LBB> On a typical day, what does your ‘listening diet’ look like?

LBB> Do you have a collection of music/sounds and what shape does it take (are you a vinyl nerd, do you have hard drives full of random bird sounds, are you a hyper-organised spotify-er…)?

Vince> My biggest collection is actually DVD’s - all films - I can't get rid of them - when my local closed down a few years back I went in and bought like 500 DVD’s - (all the best of course ) now even though they are probably all streaming I can't get rid. I have got some vinyl yes and recently started buying soundtrack on record again - just got Suspiria OST vinyl

Outside of the music and sound world, what sort of art or topics really excite you and do you ever relate that back to music (e.g. history buffs who love music that can help you travel through time, gamers who love interactive sound design… I mean it really could be anything!!)

LBB> Well film is my biggest love outside music - does that count is it far enough away?

Vince> Film and music are very interconnected mediums for me so it's hard to access that.

LBB> Let’s talk travel! It’s often cited as one of the most creatively inspiring things you can do - I’d love to know what are the most exciting or inspiring experiences you’ve had when it comes to sound and music on your travels?

Vince> Two come to mind, I had the chance to visit the Grand Canyon - it was strange in that it's such a photographed place and of course sometimes visiting those places can be a let down for that reason - expectation meets reality. Anyway I went for the sunset and was listening to Stokowskie’s Bach Variations - it was like a spiritual experience - one I will never forget. I think the combination of looking at like a billion years of evolution just seemed to sit absolutely perfectly with what I was listening to.

LBB> As we age, our ears change physically and our tastes evolve too, and life changes mean we don’t get to engage in our passions in the same intensity as in our youth - how has your relationship with sound and music changed over the years?

Vince> Well as you rightly point out the intensity changes - that feeling of discovering something new for the first time - I guess it becomes harder to achieve that same intense sense of the new. But what I would also add is that I am much more open to listening to styles and musicians who when I was younger might have fallen outside of my prejudices if you like. When I was young there was some music that I found hard to listen to because of certain preconceptions. That isn’t the case now and I am much more able to enjoy anything , no matter where it might be coming from.