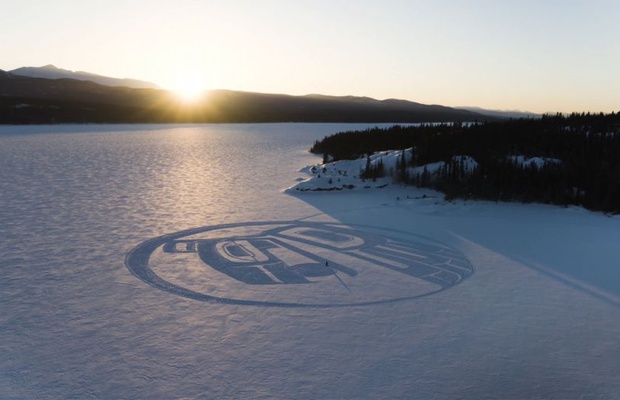 In collaboration with Tourism Yukon, Cossette worked with local Formline Tlingit artist Megan Jensen, a member of the Dakhká Khwáan Dancers, to create The Art Show of Winter, a cinematic short film that honours the Tlingit story of how Raven brought light to the world. Filmed on location in the traditional territories of the Carcross Tagish and Kwanlin Dün First Nations and the Ta’an Kwäch’än Council, the film is set against a breathtaking northern landscape and reveals Jensen and her team’s largest temporary art installment to date.

The story of how Raven brought light to the world is narrated in Lingít by Jensen, and has been passed through many generations. The Lingít language has very few fluent speakers left and the need for language revitalization and preservation is more pressing than ever. In addition to learning her Lingít language for 8 months, Jensen also learned the translation of how Raven brought light to the world 3 months ago. Historically, and even in present times, Tlingit people have transmitted their history orally, often through storytelling. The ability to share this story in her ancestral language is not only a victory for Jensen’s community, but also for her own personal journey of learning the language.

“This story is one of the many stories that I grew up listening to my grandmother narrate. It carries a lot of meaning, not only for a countless number of communities on Turtle Island, but also for me as an artist,” says Megan Jensen, Tlingit artist, dancer, language learner and student of Northwest Coast design. “One of the most meaningful parts of this entire process

has been knowing that communities from all over the Yukon, and hopefully beyond, will be able to use this film as a resource to learn this story in our language. It is one of the most heartfelt and meaningful projects I’ve ever been a part of.”

Measuring 1.62 acres and 300 ft. (91.44 m) in diameter, Jensen’s epic work of art was brought to life with the help of Cossette and captured by Indigenous owned Whitehorse-based film production company, TSU North. The final design includes 15,400 snowshoe steps completed over the course of 11 hours, and it took a total of 60 drone flights to capture it all on video.

“This was a real opportunity for us to help Travel Yukon highlight not only the beautiful landscapes of the territory, but also honour the Yukon's deeply-rooted culture of storytelling and homegrown artistic talent,” says Scott Schneider, Creative Director at Cossette. “When people see this film, we want them to remember the Yukon's rich cultural history, and keep the territory top of mind as a place to visit and explore when it’s safe to travel again.”