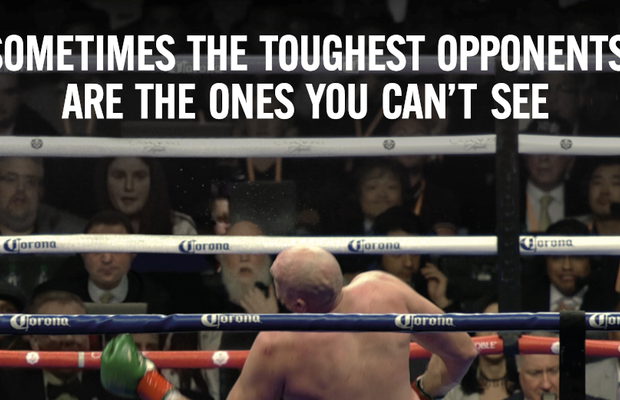 Total Health agency Seven Stones and AMV BBDO have collaborated on a campaign for suicide prevention charity Campaign Against Living Miserably (CALM), encouraging those struggling with their mental health to open up and seek support. The new work uses the context of sport – and heavyweight boxing champion Tyson Fury – to spark conversation about the impact of mental health challenges, which is positioned as 'The Invisible Opponent'.

Using real footage of Tyson Fury’s fight against Deontay Wilder in December 2018, but with his opponent digitally removed by MPC, we see the fighter moving around the ring, throwing and evading punches and his skin rippling with the impact of jabs. The sequence sees two big blows knock him to the floor, as the referee starts to count. Summoning extra strength from somewhere, Fury lifts himself from the canvas and stands ready to fight again. CALM’s powerful message is that “Sometimes the toughest opponents are the ones you can’t see,” which appears before the words 'Don’t fight it alone' and the helpline.

The campaign goes live in advance of Tyson Fury's trilogy rematch against Deontay Wilder, and will be officially introduced by ITV during Love Island this evening. The campaign, planned by the7stars, will be backed up by VOD and YouTube, as well as JCDecaux UK’s Transvision screens nationwide. Social media will focus on the core film and engage influencers to drive reach and to encourage conversation about the topic, using the hashtag #InvisibleOpponent.

Simon Gunning, CEO, CALM said: “In the UK 125 people die by suicide every week - with 75% of those deaths being male. That’s not ok, and it doesn’t have to be that way. That's why now, more than ever, we must continue to challenge the stigma that prevents people from seeking the help they need.

Like many of us, Tyson Fury has fought invisible opponents. And we hope this campaign starts a new conversation about the impact of mental health challenges - because the more we talk about it, the more we normalise being open about what we’re going through, the more we can get support when we need it. We want to inspire people who might be going through tough times to take that first, crucial step and reach out to family, friends, or the CALM helpline before they reach the point of crisis. Whatever your battle, CALM is here, in your corner.”

Tyson has spoken in the past about his own struggles with mental health and how close he came to suicide. By shining a light on his story, the campaign aims to challenge the misconception that suffering from and talking about mental health is a sign of weakness and to encourage people to seek help if they are struggling.

Dan Russell (managing director at Seven Stones) and Joe Smith (strategy partner at AMV BBDO) said: “We wanted to use the context of sport, an area where men are more comfortable expressing their emotions, to start a new conversation about the impact of mental health. We’ve had this idea as a team ever since Tyson stood up at BBC Sports Personality of the year in 2018 and spoke about his challenges with mental health. If the big heavyweight champion of the world can talk about it, then anyone can. Removing the opponent from Tyson’s fight footage was a compelling way to visualise how mental health can feel. It’s a powerful message that we hope will make people stand up and take notice of the battles we all face from time to time with our mental health.’

If you’re struggling or worried about someone, CALM's helpline & webchat are open from 5pm until midnight. Call CALM on 0800 58 58 58, or chat to their trained helpline staff online. No matter who you are or what you're going through, it's free, anonymous & confidential.