The Nexus Studios directorial duo talk to LBB’s Nisna Mahtani about their creative pairing, diversity in the industry and creation of ugly scarves 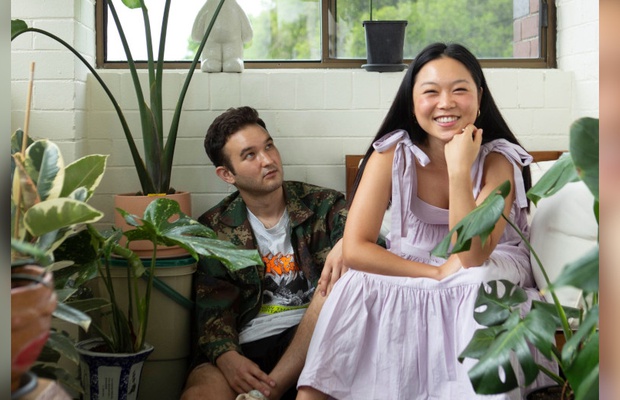 There’s nothing subtle about the animated duo of Haein Kim and Paul Rhodes. The Sydney based pair have an infamously bold, distinct style of animation that makes their work unmistakably unique.
As children the pair, who are repped by Nexus Studios in London, didn’t seem to have all that much in common. Haein was her school’s resident “anime eye” artist sketching for her fellow classmates, and says she was obsessed with “the idea of being an artist” at an early age. Paul on the other hand “watched Toy Story a million times” but also loved rugby, taking on the job of tackling the opposing team through the game.
The duo met at the University of Technology Australia, where they both studied animation. Haein “wanted to become a Pixar animator”, exploring new possibilities through their friend Bailey Sharp. Paul was also surrounded by fellow students, who influenced his “appreciation for comics and animation”, particularly crediting Bailey for lending him her comics, zines and graphic novels.
Haein was brought up with taboo subjects and strict rules which meant that by the time she went to university, she began to immerse herself into “everything forbidden, all guns blazing.” In a similar vein, Paul’s Christian background meant that he decided to “become (his) own person”, both exploring creativity as they plunged themselves into the learning process.
Haein and Paul began working independently but after some stints of freelancing, Haein describes how the best friends “worked for the first time together on an MTV Ident” during their last year at university. Haein explains how the project “was super fun” and that it felt good to get paid to create whatever they wanted.

The directorial partners found that they “work really well together” and have continued to do so since. They now live together in Sydney and have spent the lockdown largely in each other's company. Their 2017 graduate film ‘Peepin’’ set the tone of work that followed, showcasing a brilliantly unique style of animation that captures the audience through its storytelling embedded with racial issues and captured with a brilliantly bold style.

Their work also includes a Nike campaign as well as Bodyform, MTV, Oppo and Uniqlo.

Diversity and representation are significant in Haein and Paul’s work, being from South Korean and Chinese/English backgrounds. Paul explains: “A white Australian client told us to make one of our (Asian) characters' eyes bigger and ears smaller because it was racist. That was funny.” Haein also feels passionate about inclusion, explaining her frustration with “performative action” in the form of companies using diversity “on the surface level” rather than inciting genuine change. This frustration has led Haein to dream of building “an empire for underrepresented communities, in a chic manner.”

Haein’s work includes illustrations included in the Bodyform Womb Stories campaign which won Titanium Lion at the Cannes Lions festival this year as well as an Immortal Award last year. Her participation within this campaign directly reflects how she wants to see “diversity in the big boardrooms where decision-making power is most at hand.”

The pair also comment on projects within the industry that excite them, which for Haein include Netflix’s ‘To All The Boys I Loved Before’ and ‘Never Have I Ever’ due to their representation of characters.

Paul also reflects on streaming services which he says are “blowing open creative spaces and I think people are expecting more interesting stuff now because of it.” What’s certain is that both of them are excited to be part of Nexus Studios where they’re ready “to be blasted off into space”.

Inspiration comes from far and wide. For Paul, he’s inspired by the “Paper Rad crew”, who he says “made heaps of hyper coloured rise graph zines and art installations”. He specifically mentions Ben Jones who is now at Bento Box doing “mad stuff there”.  When it comes to entertainment, however, Paul “can’t look away from” anything Kayne West is doing.

When it comes to Haein’s inspiration, she describes Manabu Himeda’s work as “SO FUN, I eat it up”. She also mentions she’s “always been a huge fan” of Misaki Kawai due to her “bad-but-good” work which prioritises an “idea-style over technique”, as she feels crafting is “about having fun as opposed to trying to render out the most realistic” animations.

Most recently, the animating partners are working on an art book together which includes “comics, illustrations and fun stickers”. They let us know to keep an eye out, as it’s close to being finished. Haein also took up knitting an ugly scarf which she’s currently “trying to convince Paul to wear.”

Airbnb's Magical Minatare Worlds Take Us to the Northern Lights