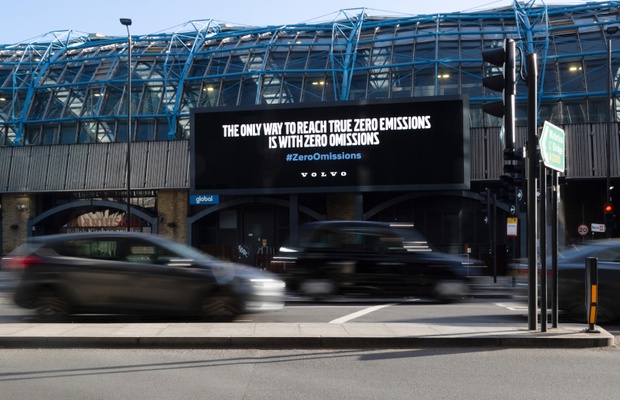 London, 10 November 2021 - Volvo UK is acknowledging the complexities of tackling climate change with #ZeroOmissions – new work launched as part of its drive towards sustainability and created by Grey London.
Timed to coincide with COP26, content now running on Twitter, display and digital out-of-home sites has been designed to spark a conversation about how much further the automotive industry needs to go beyond simply making electric cars.
So far, the campaign has generated 16 million impressions, 3.3million views, with almost 100k engagements in the first three days – the hero thread accounted for 53,565 engagements alone in three days. There has also been much heated debate – debates between consumers, between VCUK and consumers, with experts, and Jaguar responded too.
The assets, which feature statements like ‘Our industry has an omissions problem’ and ‘Electric is not enough’ above the #ZeroOmissions tagline, acknowledges the role Volvo and other automotive manufacturers have played in creating the climate crisis.
At the same time, Volvo – which has committed to only selling fully electric cars by 2030 and be climate neutral/true zero emissions by 2040 – is inviting people to let them know if they can see areas where the company can achieve zero emissions faster. The social media team is interacting with Twitter users who respond, whether it’s with questions, criticism or welcoming the stance. Grey London is also undertaking a social listening project to gauge sentiment.
The hope is that with its open and transparent approach, #ZeroOmissions will act as a rallying call for positive action.
The new push follows on from the launch of Volvo’s global sustainability campaign earlier this year outlining its ambitious electrification plans, which was also created by Grey London.
Terissa Wingfield, Marketing Communications Manager at Volvo Cars UK said, “Sustainability has been an area that we have championed over the past years at VCUK, and with COP26 happening in Glasgow, it was a bold but obvious decision to open a conversation with the public now, to drive transparency around car industry emissions.”
Grey London has been Volvo Cars’ global agency since 2013, most recently creating ‘The Ultimate Safety Test’ for the company. It also handles all of the ATL and retailer communications for the local team, resulting in notable campaigns such as its award-winning content partnership with Sky Atlantic.