“We Already Have One Reality. This Is About Something More.” 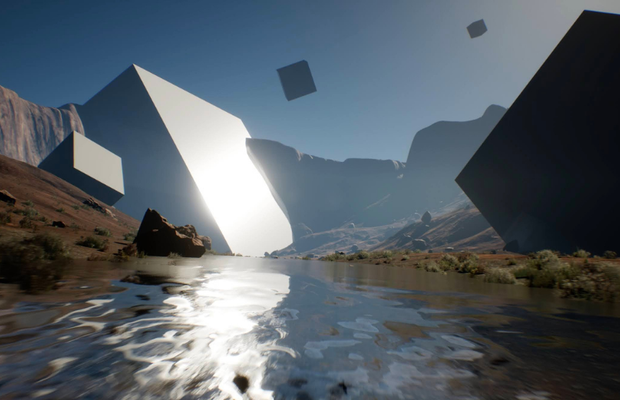 With only green hills on the horizon, you slowly turn to examine your surroundings. Staring back at you is nothing but nature, pristine and untouched. You could be the first person to ever set foot here. Tilting your neck to face the sky, however, you see shapes appear as spots in the air. Before long, they grow larger, crashing down towards the soil. Like a chaotic reimagining of Tetris, you move along as giant, perfectly formed cubes and spheres tumble to the earth around you. Eventually, the objects nestle into their new habitats, and there they remain. Stationary. Nothing more than part of a new landscape - a new world.

Such is the awe-inspiring experience of Rebirth, an upcoming VR project, built in Unreal Engine 4, from Nice Shoes director Ninaad Kulkarni. “The project essentially came out of trying to explore whether we could make a high-end VR experience that doesn’t take hours to render on a computer”, recalls Ninaad. “That made Unreal the perfect platform, with its algorithms for making beautiful images and objects coming into play”.

Above: Rebirth, directed by Nice Shoes’ Ninaad Kulkarni, is an artistic VR experience which explores the marriage between mankind and nature.

Rebirth, however, is more than a technical experiment. With its underlying themes of large, straight-edged objects interrupting nature, there’s more than a hint of parallels to mankind’s impact on the natural world. “I always ask myself what kind of message I want to be putting out there when I start a new project”, says Ninaad. “It’s not my intention to say anything negative with this. And it doesn’t have to be negative - mankind’s existence has changed the world and in all likelihood there’s no going back. So how can we make the best of this marriage between man and nature? What beauty can we find? That’s what I wanted to explore”.

For all the devastation of mankind’s impact on nature, Rebirth offers an abstract yet positive vision of a future; one in which man can strike a more harmonious balance with the natural world. “I think, in some instances, we can afford to take a positive vision of nature’s future”, says Ninaad. “Look at some of the things that are happening right now - in Singapore, you have apartment blocks with trees growing at 100 stories high. They wouldn’t get there by themselves! The way we are evolving and changing, there is both a place and a desire for nature”.

Rebirth’s shining and straight-edged objects, scattered as they are across the Earth's surface, are almost so pristine as to seem more otherworldly than man-made. For Ninaad, this was another conscious design choice. “First of all, there are few straight edges or perfect curves in nature. That’s something we are drawn to as humans - objects that have a clearly defined beginning and end. There’s a reason an iPhone has its beautiful mix of straight lines and satisfying curves”, the director explains. “So in that sense these perfect objects are utterly reflective of mankind. However, I appreciate there is an alien quality to them. Something not too far away from Philippe Starck’s lemon squeezer”.

Whilst currently in an early stage of development, Ninaad has big plans for Rebirth. “Right now the whole thing is around two minutes, but ideally I’d like to extend it to around ten”, he says. “I want to show more of this union, where man and nature sort of mesh into one another and start to become one, a kind of homogeneous world created by the two of them together.”

For many advocates of VR, the sense of immersion is what gives the medium its unique potential. The ability to put audiences into the shoes of a character, or transport them to an alternate world is an intoxicating prospect for storytellers and users alike. Logically, then, it might follow that developers and creatives should look to present their VR experiences in the most lifelike or ‘realistic’ way possible. For Ninaad, however, that’s not necessarily the case.

“I would say that we already have a reality. And what we are trying to do as artists is to go beyond that. I don’t think the potential of VR is limited by what we recognise as reality”.

According to the director, that boundless potential for the medium is perhaps best expressed via Unreal Engine. “What’s fascinating and kind of awe-inspiring about Unreal”, Ninaad explains, “is that we can see the film industry, the music industry, and the gaming industry all coming together on this platform. Look at what happened with Travis Scott in Fortnite - we’re talking about the future of entertainment, here… beyond entertainment, even.

“It’s astonishing, for example, how well-placed Unreal is for the challenges thrown up by the pandemic. If we start considering how it can be applied to VR, suddenly we have the potential to create new worlds we can inhabit in a way that hasn’t previously been possible. At a time when you’re trapped within the same four walls for an extended period, it’s not difficult to see the appeal and the potential”.

If it is true that VR provides audiences with a more direct experience that’s capable of moving hearts and minds, projects with social change at its heart are what will prove it. “I hope that one thing Rebirth highlights is that VR is not only a professional utility for various industries & a gaming platform”, says Ninaad. “My ultimate goal is to inspire other creators to see this medium as a way of driving positive change through art”.

Over the past five years or so, there have been some huge strides for VR - though maybe not as huge as projected. Industry giants such as Facebook and Samsung have long been invested in the technology, and yet a state-of-the-art VR experience has so far proven elusive for the mass market.

“I think we went through a period a couple of years ago where various companies were maybe trying to force VR adoption through mobile phones, considering the wide usage of mobile phones in the world already”, says Ninaad. “Maybe the reason that didn’t work is because VR is not designed to be on a mobile phone, you are constrained by the screen which is not meant to be held two inches from your eyes and ships with lower than required screen refresh rates and pixel density for VR usage. Despite creating a strong  buzz in the industry and putting VR in many hands, the experience made a lot of viewers dizzy and sick while using phone based VR and drove some audiences away from the medium! Not to mention how many other things on there are competing for your attention on a phone. For something that is meant to immerse you, it’s not a natural home”.

In order for VR to truly realise its potential, then, there needs to be a mass adoption of headsets or glasses. This may seem unfeasible due to both price and apparent consumer appetite for the medium. However, Ninaad argues that the idea of finding a headset alongside a TV and Nintendo Switch in consumers’ homes may not be as fanciful as we think.

“I believe it’s only going to take a cultural moment similar to the one we are experiencing now”, he posits. “Just look at the popularity of dedicated systems such as the Nintendo Switch, especially today where it seems to be out of stock everywhere. People can get a great gaming experience on their phone, but perhaps this situation has made people think they’ve exhausted the limits of phone gaming and they want to go to the next level, so to speak. I don’t think it’s unreasonable to imagine we might see a similar moment with VR in the near future, especially as the price point for state-of-the-art tech is only getting lower over time, the Oculus Quest from facebook is a great example”.

As the technology becomes more powerful and more accessible, so do the creative possibilities. Ninaad hopes that more will embrace VR’s potential beyond gaming, creating stories that put the emphasis on empathy. At a time where the ability to understand one another seems more important than ever, perhaps the long-anticipated VR revolution has finally found its moment.

A Remote Possibility: Can Mentorship in Post Production, VFX and Creative Production Survive The WFH Era?