When the World is Divided by Screens, Kingfisher Beer Brings People Together 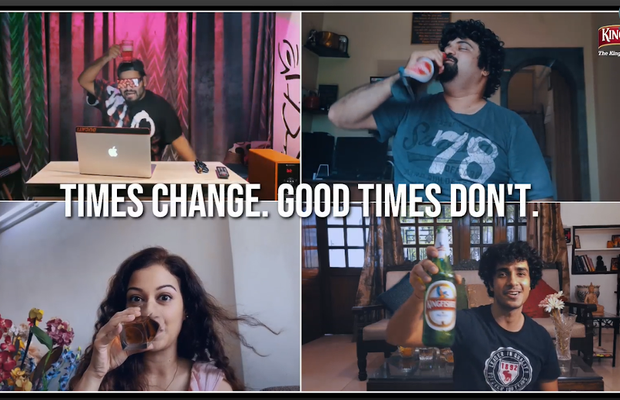 Times are grim, spirits are low, there isn’t much to celebrate. In the current scenario; it isn’t possible for people to meet in person. Technology is being harnessed to stay connected, with friends and colleagues.

Kingfisher, the brand that is all about bringing people together and spreading good times, wanted to add some cheer and positivity to people’s lives as they struggle with uncertain times. The result was the creation of a music video, an anthem to build positive community spirit and convey that we’re in it together.

With the sale of liquor permitted, Kingfisher encouraged people to catch up with friends and have beer, but over screens. The brand believes that - Times Change. Good Times don’t. Divided by Screens. United by Kingfisher.

The music video captures the fun side of the lockdown in true Kingfisher style, showcasing people having fun in their homes, connecting over screens, using random things to workout, pulling pranks on each other and  dancing at home. It also features popular web actors - Ahsaas Channa, Ambrish Verma, and Akashdeep Arora.

The classic Oo La La tune was reinterpreted, and for the first time featured a verse section that built up to the chorus. The music arrangement was also a fun mix of guitars, plates, spoons and of course beer bottles. The lyrics of the song captured the fun side of being at home like avoiding traffic jams, attending meetings in pajamas and taking lunch breaks at home.

Commenting on the film, Sameet Ali Soni, senior creative director said: “It was a first, we all have heard about work from home, but this was shoot from home, so the actors, directors and the agency team would connect on two zoom calls over laptop and phone and supervise two Units... as far as the song goes I actually sat on an acoustic guitar and composed the basic tune along with my lyrics. And of course Anand Bajpai the music director took it to the next level."