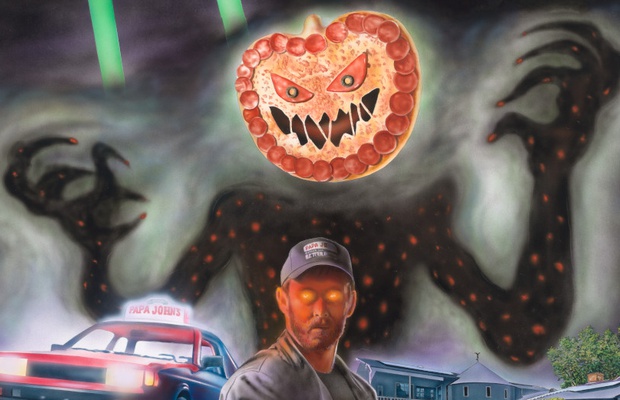 Papa John’s is treating its customers to new AR tricks this Halloween with the re-release of its Jack campaign, featuring the iconic Jack O’Lantern shaped pizza and ‘80s horror film parody series.
A new AR Instagram filter can be used globally at Papa John’s for the first time and activated via specially designed box topper flyers, bringing to life the brand’s Halloween character of Jack, who ‘possesses’ the pizza.
Jack was first let out of Papa John’s pizza boxes last year as part of the release of its parody short film. Now customers can attack Jack with pots of garlic dipping sauce when he appears via the AR, transform themselves into Jack when they open their mouth to take a bite and become possessed by the pumpkin-shaped pizza spectre.
British artist Zedo also recently created a Jack-themed rap music track and video to run as part of the campaign.
As we move into the spookiest week of the year, LBB’s Laura Swinton spoke to Papa John’s director of international marketing EMENA Lawrence Felice to find out more.

LBB> Halloween seems like a festival that doesn't get an awful lot of attention from brands - especially as Christmas advertising comes earlier and earlier (we had a campaign come out on October 1st this year!). Are brands missing a trick (or treat)?

Lawrence> Christmas certainly is coming earlier and earlier, isn’t it? Especially this year with more and more headlines about pre-planning. However, as a brand that’s rooted in the US, Halloween is our second most important commercial period and we’re finding more and more markets are entering into the trick or treat spirit. So it’s a good focus in our calendar and our customers look forward to it.

LBB> For a brand like Papa John's, why is Halloween such a great time strategically for the brand to be present and push marketing?

Lawrence> Historically, the US and to a lesser extent the UK lead the way with Halloween celebrations. However, it’s amazing to see its popularity increasing in international markets and Halloween provides another opportunity to speak to and connect with our customers.
The Halloween window also speaks directly to a couple of our core values, one being to simply have fun. (We’re a pizza brand and pizza should be fun!)
Another is innovating to win, be it with limited edition products in the case of our iconic Jack O’Lantern shaped pizza and Trick or Treat Stuffed Breadsticks (with a spicy Jalapeno inside one of them). Or in our communication and creative outputs, such as the Jack horror film and the Jack 3D AR Instagram filter lens.
Halloween provides a fantastic opportunity for Papa John’s to drive incremental sales, be it through Halloween parties, watching horror movies, playing scary games. Whatever the occasion, pizza has a relevant place at the table. It’s about winning the fight to be top of mind. 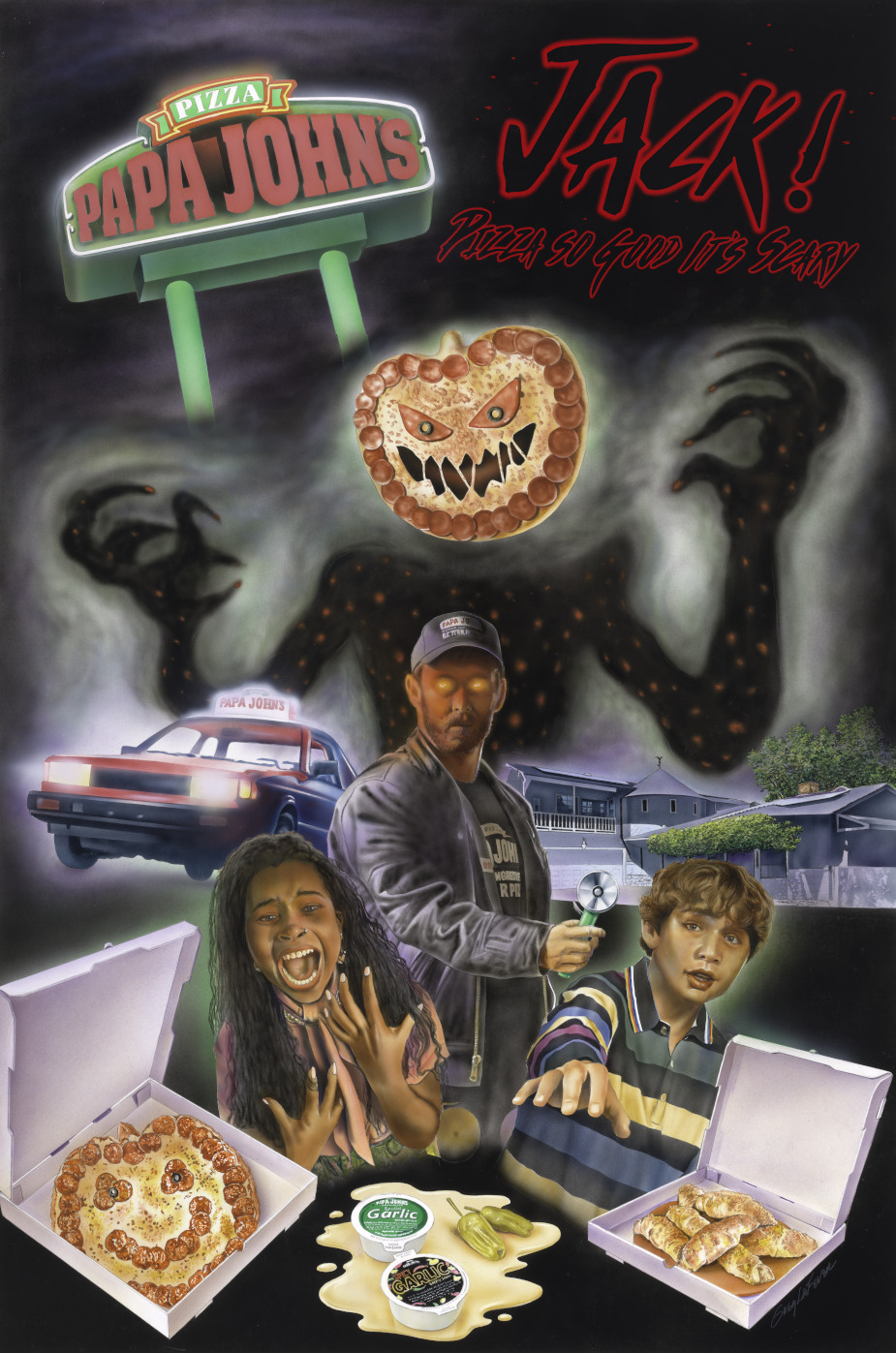 LBB> Tell us about the origins of Jack?

Lawrence> The Jack O’Lantern pizza has become a Papa John’s icon over the years. Bringing Jack to life as a pizza-headed spirit felt like a creepy enough idea that could potentially have a lot of stand-out and engagement – the idea flowed from this initial thought.
The main challenges were to ensure an ‘80s style B horror film would be visually convincing, not too graphic or gruesome, nor amateurish in its execution. The film also needed to be short enough for social media, so it was released as four x1 minute episodes.

LBB> This campaign builds on last year's - what was the reception like to Jack and what sort of impact did he have last year?

Lawrence> It was an exciting opportunity to introduce the Jack campaign to franchisees. It was something different that was new and ambitious with the creative power to capture their imagination and encourage roll-out in their markets.
17 markets executed the Halloween campaign and we saw an increase in sales in all. Jack came to life on social media, digital banners, as well as in-store with team t-shirts, stand-up banners, table tents and playing the film on loop via menu board screens. We also executed PR and influencer activations in selected markets.

LBB> You’re credited as director, but presumably you didn’t direct the film itself! What was your role in the project?

Lawrence> It’s fair to say I didn’t direct the actual film! That was actually produced and directed by LA-based SkyCorp, who specialise in filming ‘80s and ‘90s style commercials, infomercials and short films.
My involvement was directing the project from idea inception and providing the vision and synopsis, all the way through to managing the campaign roll-out to franchisees.
It was rewarding to have the green light from Papa John’s leadership on such an ambitious project, I felt heavily invested in it, and keen to ensure my vision was brought to life.

LBB> There are some fantastic classic horror touchpoints and inspirations woven through the campaign - can you tell me about that?

Lawrence> The whole team was keen to include a nod to the original classic cult horror film Evil Dead; the scene where Bruce loads his toy water gun with Papa John’s Special Garlic Sauce and has his pizza cutter ready to defeat Jack was inspired by a scene in that film.
Other key elements to ensure its horror authenticity include using a professional Special FX and CGI creator for the Jack character and securing permission from Vincent Price’s estate to resurrect his iconic blood-curdling laugh.
With SkyCorp, we created an original and eerie musical score in the style of John Carpenter movies. And commissioned retired film poster artist, Greg LaFever, to create a hand drawn poster in the style of Eighties horror movie posters.
For social media, an Instagram developer made a Jack O’Lantern face filter, whereby a happy pizza face is masked over the user’s face and when the user opens their mouth, the face transitions to the scary Jack character – with added sound effects and spooky bats!
LBB> How did you navigate the challenges of remote production?
Lawrence> Managing a film production in LA, from my home office in Bedford, was certainly a very challenging one.
Lots of late-night meetings discussing storyboards, shoot angles, casting and wardrobe, reviewing shoot locations, directing on musical score etc. On top of this, we all faced the challenges and curveballs of shooting during the pandemic.
What helped was the strong relationship we have at Papa John’s with our US colleagues who were able to offer fantastic support on the ground - from identifying appropriate stores for external shots (PJ signage from the opening of the film) to liaising with local franchisees to secure store use for shoots.

LBB> How did the idea for an AR aspect to the campaign come about?

Lawrence> Last year’s campaign generated a lot of international UGC, we wanted to build on this and go for something more interactive, using a 3D AR filter triggered by a special design boxtopper (the design of which was the movie poster from last year’s campaign). If people buy a Halloween product, there’s a QR code that allows the customer to access the filter.

LBB> What were the most interesting challenges when it came to developing the AR aspect of the campaign?

Lawrence> Identifying and working with a developer who has the skillset and experience in turning around a great looking and engaging filter in a matter of weeks is always a challenge.
We worked collaboratively with a US company to ensure the aesthetics stayed true to the Jack character and incorporated key film elements for consistency, such as Jack’s dialogue and the Special Garlic Sauce as the weapon.
One challenge was to ensure the gamification element had a difficulty level that allowed for some skill, while remaining snappy enough for social sharing.

LBB> And how are your team maximising engagement with this side of the campaign?

Lawrence> We’re working with our international franchisees to guide them through a Halloween marketing toolkit, which includes guidance on how to activate the 3D AR filter. This, in turn, helps to drive the desire to buy a Halloween product to access the filter, encourages UGC, attracts attention and builds awareness of our Halloween products.

LBB> What's your top horror movie to watch with a pizza on Halloween?

Lawrence> Choosing one is way too difficult, a week of horror films in the run up to Halloween feels appropriate! On my watch list are Evil Dead (the trilogy), Francis Ford Coppola’s Bram Stoker's Dracula, An American Werewolf in London, 28 Days Later and Shaun of the Dead. All absolute classics in my book!