Alyson Griffin, VP of marketing at State Farm, tells LBB’s Addison Capper about the thinking behind the #TeamStateFarm TikTok challenge 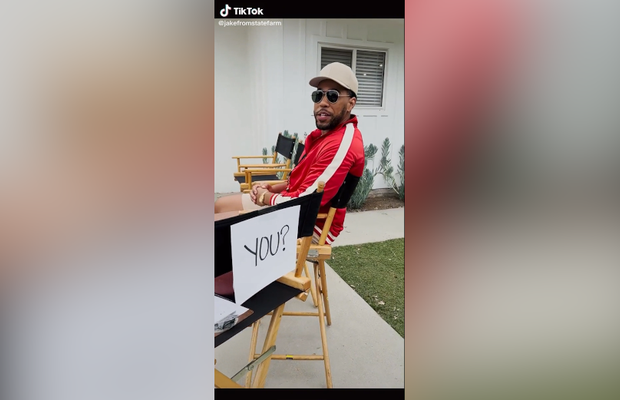 After its Big Game debut last year, State Farm has opted to focus its 2022 Super Bowl efforts around TikTok instead of big budget TV.
The insurance company has launched the #TeamStateFarm TikTok challenge, a contest where popular brand mascot Jake from State Farm will play talent scout and give consumers a chance to showcase their unique abilities via video submissions on the platform. The winning creator will receive their very own role in an upcoming State Farm commercial, a meet and greet with Jake from State Farm and more.
"Last year’s Super Bowl spot 'Drake from State Farm' was a huge success for us," Alyson Griffin, VP of marketing at State Farm, tells us. "As we explored opportunities to engage with consumers during the football post season this year, we knew it would be important to extend consumer engagement from the regular season into the postseason and beyond. By tapping into the creative TikTok community with our existing #TeamStateFarm platform, this activation is an opportunity for State Farm to show up in a dynamic and unexpected way while further sharing our 'good neighbour' values."
Alyson adds that State Farm is always looking for new ways to change up the ways that the brand reaches its consumers - and focusing the majority of its marketing efforts to a single day felt "limiting" this year. TikTok also meant that it could target a particular age group.
"With a massive Gen Z and Millennial audience, TikTok is an effective tool for reaching this new target demographic in an interactive, engaging way," says Alyson. "It’s clear that this audience is catching on, as Jake from State Farm already has more than 200K+ followers in just a few months since joining the platform in November 2021... We are continually looking for culturally relevant moments and partners that attract younger audiences, specifically Millennials, and increasingly, Gen Z. As these consumers experience major life milestones like buying their first home or car, they’re looking for an insurance provider that’s not only recognisable but relatable."
Though this year's activation isn't a traditional on-air TV spot, the tie-in to the Super Bowl is the timing of everything. State Farm has strategically timed key dates for the #TeamStateFarm TikTok challenge to leverage excitement of the NFL playoffs and, eventually, the Super Bowl.
"By asking consumers to post their duet video submissions throughout the playoffs, we're able to build up hype and anticipation, captivating fans and encouraging greater participation leading up to the big game. Then, on Super Bowl Sunday, we’re engaging that captive audience to vote for the challenge’s top three finalists, whose duet video submissions will be pinned to the top of Jake’s TikTok page."
Jake is the catalyst for the #TeamStateFarm challenge. Jake will be featured in the TikTok duets, announce the winner and even be part of the prize, with the winner getting to meet him on set in the future and work alongside him for an upcoming ad.
To enter the competition, users can simply create their own video showcasing their unique talents using the duet feature on TikTok for a chance to be part of #TeamStateFarm. (Note: their talent does not need to be football-related.) Participants must follow and tag @jakefromstatefarm in the video, using the hashtags #TeamStateFarm #Contest.
On February 13, the day of the Big Game, the top three duet videos will be pinned to the top of Jake’s TikTok page, and TikTok fans will get the chance to vote by liking their favorite through February 17 at 11:59pm, Eastern Time. The video with the most likes will win the challenge, with the winning creator receiving a paid trip for a meet and greet Jake from State Farm, and their very own role in an upcoming State Farm commercial!
"Beyond the challenge itself," Alyson adds, "our consistent advertising and partnerships in this space have earned us a voice when it comes to football, ultimately building an organic association between State Farm and the Super Bowl."

Is the UK Losing Its Cultural Influence?