DNA delivers an antidote to Rainier fans’ urge to get outside 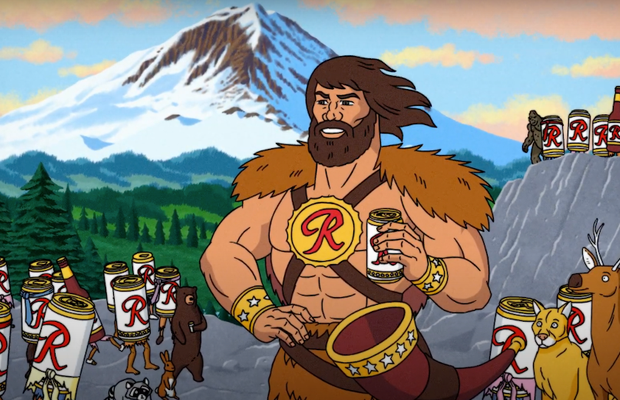 "Raiiiiiiiiinniiiiiiiiieeeeeeeeerrrrrrrrrrr!" From high atop Mt. Rainier, the Barbeerian blows his horn, calling to all the domesticated Wild Rainiers to ditch their urban trappings and return to the wild. Launching the next instalment of their ‘Rewild the Rainiers’ campaign for Pabst-owned Rainier Beer, DNA in Seattle hopes to inspire nature-loving beer drinkers to enjoy some much-needed outdoor time.

The DNA team was inspired by old Rainier Beer ads featuring a 'barbeerian' riding atop a two-legged Rainier beer bottle. While the campaign was originally conceived to be a live action shoot, Covid filming restrictions pushed the team to not only re-imagine but expand on the concept as an animated campaign, collaborating with Augenblick Studios to bring it to life with a retro-meets-Adult-Swim vibe.

"From murals in bars to epic Wild Rainier tattoos—fans see Rainier Beer as a work of art, proudly displayed as an ode to their cult following of the brand," explained Allyson Paisley, creative director at DNA. "The idea of illustration and animation is very natural for the brand, and let us create a more epic story and distinctive visual world. Every time you see the work, there are more fun, hidden easter eggs that fans discover and share on social."

The campaign launched with a hero video plus shorter versions for digital and social platforms. In the videos, the Barbeerian's call reaches city-dwelling Rainiers who are living ordinary lives in dull apartments. One leaps up from his computer, where he was busy coding ‘All_code and no_beer,’ while another dashes out of his shower past ‘Hers’ and ‘Beers’ monogrammed towels. Even Rainier cans trapped inside 12-packs break free to heed the call to rewild themselves.

"Our style of animation lets us build out the characters, starting with our Barbeerian who looks like he came out of a fantasy novel with his cartoonishly-ripped abs and a huge bottle cap chest plate," explained Devin Clark, creative director at Augenblick Studios and director of the ads. "There is also a lot of campy humour that comes from the script we got from DNA that captured our imagination. We had a lot of fun packing in the frames with fun jokes and giving viewers treasures to find."

Many of the ads' frames were hand-drawn on computer screens, enabling Augenblick to capture the lush backgrounds and appeal of Mt. Rainier while adding playful touches like welcoming bears, rabbits, and even a Sasquatch.

"The core of this campaign reflects our always-on brand purpose, inspiring people in the Pacific Northwest to go play in the wild," explained Nick Reely, VP marketing for Pabst Brewing. "That purpose feels even more relevant at a time like this, when many people are feeling a bit trapped and looking for a sense of escape.”

Beyond the videos, the campaign engages fans with GIF stickers, artwork-inspired caption contests, and Instagram Carousel and Story executions. In one, the action unfolds like the pages of a comic book, and another unit features a super long "Raiiiiiiniiiiiiieeeeer" that spans across multiple panels.

Swerve Serves up Sweet New Campaign That Will Keep Everybody Pleased