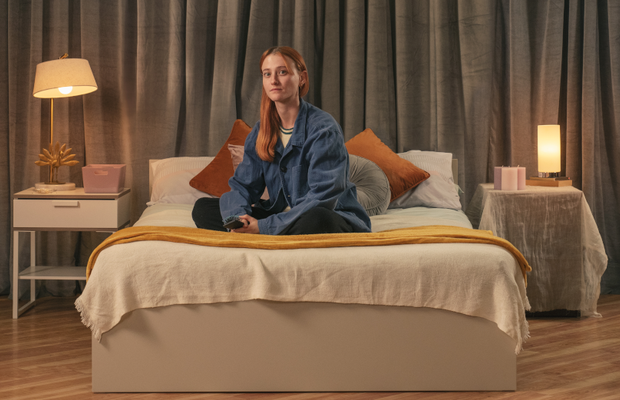 National youth homelessness charity, Depaul UK, is opening the ‘Beyond a Bed’ store in Croydon Centrale shopping centre to show that on its own a bed is not enough to help young people escape homelessness.

Developed by creative agency Publicis•Poke, ‘Beyond a Bed’ is fitted out like a real bed store but will instead tell the real-life stories of young people whom Depaul has helped. The store will be open for a week from 19th to 24th August, and is part of a broader ‘A Bed Is Not Enough’ campaign that highlights the disproportionate toll on the physical health and mental wellbeing of young people caused by Covid-19.

The ‘Beyond a Bed’ concept falls against the backdrop of the government announcing it will not be continuing with the £20 top-up on Universal Credit payments as the furlough scheme comes to an end and the Combined Homelessness and Information Network (CHAIN) recently reported a 30 percent increase in the number of under-25s sleeping rough in London.

Visitors will see how Rachel, Chris, Joe, Charlotte, Amelia and Daniel needed more than a bed for the night to escape homelessness for good. Their stories show the necessity of Depaul’s specialist long-term support that goes beyond a bed and includes services like education and careers guidance, mental health counselling and family mediation.

The ‘A Bed Is Not Enough’ campaign is aiming to shine a spotlight on the lesser known, yet vitally important, services that Depaul provides, in a bid to drive up the number of monthly donors. The charity is asking the public to make regular donations of £12 a month to provide long-term support for the rising number of young people who face homelessness.

Claire McMaster, executive director of fundraising and communications, Depaul UK, said: “The homelessness problem is, and always has been, a long-term problem, but solutions are all too often short-term. The strategic shift of the ‘A bed is not enough’ mission is a vital step to tackle the constant challenges homelessness charities like Depaul face in raising ongoing funds. We need a more permanent solution. With the ‘Beyond a Bed’ campaign we’re aiming to bring a fresh awareness to the issue in an engaging, immersive way in the hope that people begin to subscribe to tackling homelessness and go beyond a single donation”

The experiential activation is being supported by social film, digital and PR inspired by the real-life stories shown in the bed store.

Dave Monk, executive creative director, Publicis•Poke, said: “Homelessness is a scourge on society, yet the full extent of its impact on lives and how to tackle it are often misunderstood, leaving tens of thousands in peril. With ‘Beyond a Bed’ campaign we are aiming to bring home to visitors in an engaging, immersive way the full extent of homelessness throughout this country. The data on homelessness is truly shocking and working with Depaul has really enlightened the whole team.”

Recent ONS data estimated 2,688 people were rough sleeping on any given night in autumn 2020, a reduction of a third year-on-year. This has been accredited by the Big Issue to the ‘Everyone In’ programme during the pandemic, which is estimated to have protected 37,000 people across the country throughout the pandemic. Further ONS data on homelessness revealed 62,250 households were either homeless or at risk of homelessness in the UK last year.

However, the Office for Statistics `Regulation recently noted potential data gaps and flaws that could mask the full extent of homelessness in the UK. Meanwhile a December 2020 report ‘Everything Stopped’ from Depaul showed that the pandemic has disproportionately impacted young people aged 16-25, with steep rises in couch-surfing, dropping out of education and loss of employment being reported, as well as anxiety, mental health challenges and isolation. In London alone, Depaul reported a 47% increase in homelessness among this demographic in 2020 compared to 2019.

“The Everyone In programme has shown what we can achieve when there’s the impetus to eradicate it but we must do more than provide a bed and work towards tackling the root causes rather than just the symptoms. We hope this campaign will make people consider the longer-term support people, especially the young, need to avoid slipping into a state of homelessness”, added Claire.

Founded in 1989 in response to the growing number of homeless London youth sleeping rough on the streets, Depaul is supported by players of People’s Postcode Lottery and provides targeted services such as ‘Steps to Success’ and ‘Mental Health Support’ to young people across the North East, South Yorkshire, Milton Keynes and Greater Manchester as well as London and the South East.