Your Shot: We’re All Going on A Summer Holiday… in Our Imaginations 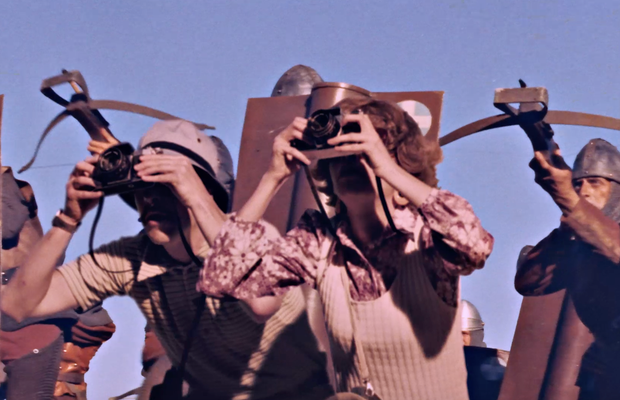 If director Mark Denton could take a city break within any work of fiction, he’d like to head to the streets of Dickensian London. Stroll around for a few hours, hopefully avoiding the gangs of pickpockets, and have a rummage in the Old Curiosity shop. As for Ryan Newey, CCO and founder of Fold7, he’d head for sunnier climes. Digging out a linen suit and the outrageous stack of trunks, trolleys and hatboxes necessary to travel in style in the 1920s, he’d head to Agatha Christie-era Egypt for a taste of Death on the Nile.
The pair are pondering their literary travel plans because they’ve just finished working on a rather clever new ad for Audible. Paying homage to vintage ads from the glamorous golden age of air travel, the ad plays on the fact that, thanks to Covid-19, foreign travel and far-flung vacations are off the cards for most of us. Instead, it invites viewers to lose themselves in fictional worlds. The ad cleverly collages archival footage with newly (and safely) filmed elements to create a split screen film that feels like a yellowing postcard from the 1970s.
It’s a timely spot and one that has been pulled together in barely six weeks. The decision to make something came when the agency figured it would be appropriate to press pause on the strategy they’d been building on for Audible before Covid-19 struck.
“That whole strategy was about being the antidote to mindless moments.  You know, we all spend too much time doing things on mobile phones and what have you, that really can really just suck time away. We felt during this Covid moment that it would be inappropriate for a brand to bring into question the amount of time you might spend on your phone because so many people are relying on their phone as a way to connected, to loved ones and to stay connected to the world,” explains Ryan.
However, there was a clear opportunity for the brand to step in and offer something different. As people find themselves grounded and facing staycations in their own homes, audiobooks provided a means for people to escape inwards, into their imagination. To adventure in the gloomy mountains of Mordor, or to soak in the souks of Marrakech. This new strategy was agreed in three days, and from there they were off.
From there, the idea took them to the glamour of air travel in the 1960s and 70s – before the days of budget airlines. Before they got there, though, there were many potential avenues to go down. “We developed about 10 or 15 different ways of bringing this to life. But we had to prioritise getting something done in the timeframe because this is about a moment in time. We designed a mock up of all these beautiful destination posters - I'm sure you've seen them, the beautifully illustrated 1920s posters of the South of France from the sort of 1920s way out of the South of France poster and it's beautifully illustrated. And we did a whole set of those as scamps and I'd love to see them materialise,” says Ryan.
As they tried to figure out who could help them bring the idea to life, Mark was the obvious choice, with his love of art direction and typography, his sense of humour and his many personal projects that conjure up vibrant, funny worlds.
And there was a lot of conjuring to do. When Mark came on board, the team didn’t quite know what book titles they would have access to. That meant that the two weeks of stock footage research was done semi-blind, with Mark, his assistant Juan Coello Hollebecq, EP Trent Simpson and two researchers digging into the archive and picking out bits and pieces that might prove useful in certain scenarios.
“The way I likened it to the agency was: it’s like having a puzzle but you ain’t got the lid!” laughs Mark.  “So it was taking these possible contenders for stock footage, print outs stuck on my wall and me doing little drawings – maybe there could be a couple of tourists there, we found a couple of sunbathers there on the Mars surface.”
As they got closer to the live action shoot, the available titles changed, resulting in a couple of disappointments and few cheeky surprises. Mark had his heart set on Lilliput – the image of a giant bloke peering over a mountainside. Ryan had been keen to see what would have happened to Salem’s Lot, when that was in the running. Alas, they weren’t to be. But on the upside, at the very last minute, they found they had permission to depict Gilead from The Handmaid’s Tale – something that led to possibly the ad’s greatest background gag.
“I’d seen the first couple of seasons of the TV show – I hadn’t read the book, not being much of a reader, but I remember the scenes of them in the supermarket,” says Mark. “On my storyboard – because I can’t help myself – I put ‘Blessed Be the Fruit and Veg’… and then they said I like that! I never thought they’d go for it, it just fell out the end of my pen!” 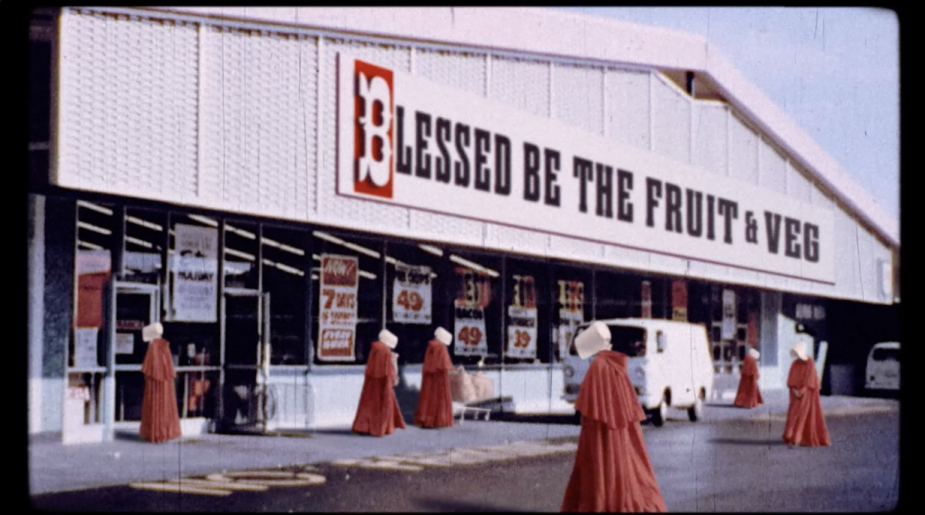 The finished ad is largely constructed of stock footage, and some scenes have elements from different bits of footage collaged onto each other. There were, though, a few elements that were shot on set. A small corner of a back garden, which bookends the ad, and a couple of shots from within a tiny, beat-up interior section of an old plane. The red-cloaked handmaids and a couple of the tourists were shot against green screen. Mark, a self-confessed ‘scaredy cat’ who won’t go to the supermarket and is reluctant to return to restaurants, says that the shoot itself was reassuringly safe – with everyone wearing masks and his wife, Anna,  decked out in a hazmat suit and vizor working on hair and makeup.
Because of the restrictions – the tight turnaround and the remote working – it was a project that involved a lot of openness, trust and collaboration – and very few meetings. Mark already knew Ryan, though he’s disappointed that he didn’t have the chance to meet creatives David O’Brien and Chris Bennett beyond Zoom and is looking for a post-lockdown ‘nosh up’. “It felt like an old fashioned creative process,” says Mark who is full of praise for the agency and client. “They were pitching in with ideas all the time – it was very collaborative and they were very open, not like ‘oh it has to be like this’. They understood the problem, they couldn’t be too specific about what we could do and what we couldn’t do because it was so dependent on finding the right bit of footage. And the client was great too. Everyone understood the problem – they embraced it.”
And that trust was extended to the post production team at Jam VFX. Though he was invited to the grade, Mark decided not to go, checking it on three screens at home and trusting colourist Dave Ludlam to work his magic. “I gave them a little steer on the grade, talked about the stuff that I liked and I had to trust them really. It’s not like there were any product shots where you had to match the pantone to a tin of baked beans. The more crap it looked the better. Hats off to the agency and client for that because they were happy for it to be that degraded, they didn’t back off from the scratches and the dirt.”
Ryan agrees on the point about trust and strong relationships – as he puts it ‘more conversations, less meetings’. Working quickly and responsively to the Covid crisis while also working remotely hasn’t been too difficult for the team. They’ve also recently put out some lockdown work for Carlsberg. “It sort of suits us. We’re a relatively modest sized team and so it works quite well. We're usually pretty reactive with clients,” says Ryan. “I think that the key to its success is the relationship you have with the client and ensuring there's not teams of bureaucracy or too big teams that you've got to deal with at that end and creating small, motivated teams and smooth and partnerships.”
The result was a spirit of mucking in and making things work – and a piece of work that flies free of many of the Covid clichés audiences have come to expect. And while this ad will stand out from the shot-on-Zoom commercials clogging up adbreaks and social media, the campaign also has a bunch of other elements, including posters and social posts that play with the format and graphics of aeroplane safety cards. There’s also an idea kicking around about allowing Audible users to send their friends physical postcards from their literary vacations. Fortunately for the team, it’s not only been an enjoyable creative puzzle to solve… it’s an idea that also has legs for new iterations, should they decide to do that.
“I hope this goes down well – if it goes down so well that they do another one I would be bloody delighted! It felt like an old fashioned, roll your sleeves up [project]…it felt like spreading the puzzle pieces out,” says Mark. “It took quite a bit of research and stuff but I didn’t have anything better to do. It was a joy to do. It was genuinely a joy to do.”