The Spaced co-creator and Mission: Impossible star shared creative advice, spoke about the fear of the blank page and opened up about how K-pop and BTS are keeping him fresh, writes Laura Swinton 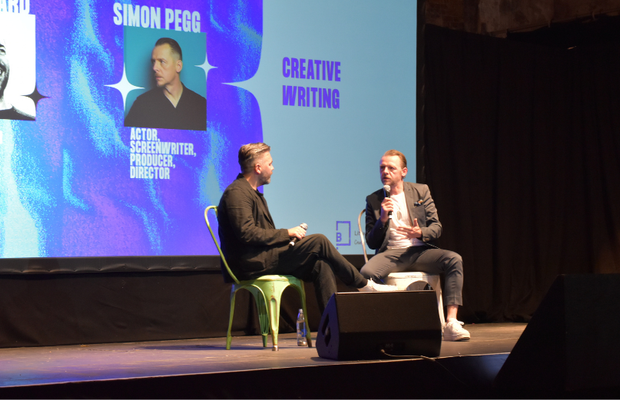 “When you write a first draft of anything… your first job is to write the shittest possible version of what you want to do.”
Simon Pegg is a creative talent who might seem to be driven by a relentless engine, constantly pushing him forward, creating in a state of perpetual motion. Best known to Brits of a certain age as one of the geniuses behind seminal late ‘90s sitcom Spaced (which also launched Edgar Wright, Nira Park, Jessican Hynes, Nick Frost, and a plethora of comedy performers), Pegg has been a busy boy since he starred as aspiring comic book artist Tim. With collaborators Wright and Frost, he made the cult favourite Cornetto Trilogy movies (Shaun of the Dead, Hot Fuzz and The World’s End), has co-written and starred in the re-booted Star Trek movie series, popped up in Star Wars: The Force Awakens and appears as a regular in the Mission: Impossible series. And yet, even Simon feels the fear that most creatives do when they’re faced with the blank page.
Speaking at the UK Creative Festival in Margate in a one-on-one with Uncommon Creative Studios founder, Nils Leonard, Simon offered a glimpse into his approach and mindset when it comes to creativity. Perhaps the biggest difference between those that make something of their creativity, like Pegg, and those who don’t, is overcoming the self-doubt and pressure and getting something - anything - down.
“The blank page is very scary - starting from a point of having nothing to focus on at all is terrifying and stressful. And so, the best thing to do is to de-stress the entire situation by reducing the amount of expectations you have on yourself. Don’t try and write a masterpiece straight away.”
‘Zombies Don’t Run’ was the title of the unofficial head-to-head between Nils Leonard and Simon, but when it comes to creativity, the Shaun of the Dead co-writer and star certainly isn’t moving at a putrefied shuffle. Simon’s advice to the frustrated advertising creatives and wide-eyed students in the audience was to, well, peg it.
“Chase it. Absolutely chase it. Don’t wait for it to come to you, no matter how talented you are, chase it. You know, because not everybody will and it will immediately put you at the head of the pack,” he said. “Be proactive; don’t sit back ever because that’s when other people just drift past you.” 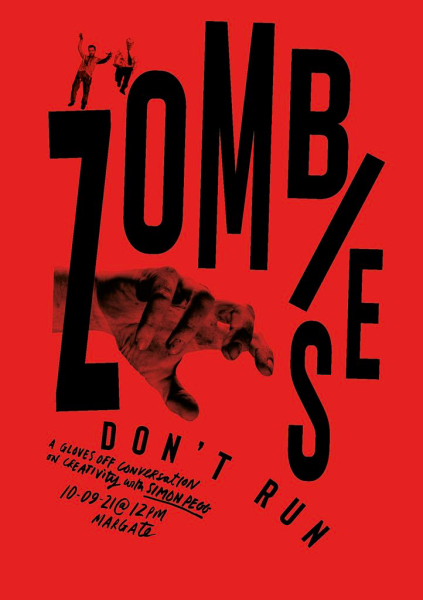 The conversation comes at a time when Simon has launched himself as a commercial director, having recently signed with RSA. Having worked with some of the most exciting movie directors around, from Mission: Impossible’s Chris McQuarrie to Pegg’s hero Spielberg, as well as his long-time collaborator Edgar Wright, Pegg is keen to earn his stripes as a director properly. It’s his belief that commercials have supplanted music video as a place for directors to hone their craft - nodding to the career path of RSA founder Ridley Scott.
As Simon has moved onto bigger projects, and as he moves into the commercial space, he’s aware that some might criticise him for selling out, but he says that accusation is unwarranted. “People that were with me back in the age of Spaced and early days will go 'you're a sell out'. And I always blanched at that because I've never sold out. Selling just doesn't mean 'getting paid more' (these days... a lot!), it doesn't mean I've sold out. Selling out is doing something for money, which is contrary to your own standards and beliefs. I think if you did something which you disagreed with, like if I took a big check to advertise, whiskey, I would be a sell out because drink is evil. Not for everybody but it is for me.”
In terms of the kind of work and scripts he is looking to work on, Simon is pretty open. He says his interest is in dynamic, efficient storytelling. Other than that, he’s quite open to seeing what happens - though he has a strong idea of what he won’t do. “I don't know, it's interesting because it would have to be the right thing. Like, I would never do alcohol, because I'm sober… Obviously you want to have some sort of connection to the product or the idea or whatever you feel like you can relate to in some way and support it. So something that was in line with my own ideologies and beliefs, I suppose.”
As he takes up his place in the director’s chair. Simon has been soaking up technical insight from his colleagues. “I’ve been working on Mission Impossible working with Chris McQuarrie learning about lens sizes. What is so fascinating [is] what a different lens will tell you about what a person is thinking. You put a 40mm on someone and… nothing. Then you put a wider lens and suddenly they’re thinking something. And you put in a lower one and suddenly they’ve got a secret.”
The other director who has had a huge impact on Simon, throughout his life is Steven Spielberg - someone who Simon has worked with on Ready Player One. “Steven Spielberg is a big sort of entertainer. But there's something incredibly precise and literate, about the way he directs which I love, he really understands how the camera can tell the story, and he's opted to make big entertaining movies a lot of the time and occasionally he'll just show what a serious adult he is but, you know, he's a big kid at heart. But growing up watching his movies and getting to work with him as well and seeing him doing it... it was just an absolute privilege. I love him. I always want to cuddle him when I see him.”
As Nils got deeper into the conversation with Simon, he touched on the fact that many of Simon’s successes appeared to be manifestations of childhood dreams. Writing for Star Trek. Popping up on Tatooine. The stuff of fantasy for any nerdy kid growing up in the ‘70s and ‘80s. In fact, it goes even deeper than that.
“I had quite a complex relationship with my stepdad. I remember one time when I was 10, he said we’ve got two choices: we can go to the cinema to see this new film called Raiders of the Lost Ark or we can go to a fair and go on all the rides. And I remember thinking, ‘he wants to go to the cinema and I need to please this guy because I don’t think he likes me’. And of course it was the best thing to do,” recalls Simon. “He was the first person I rang to say, guess who I just hung out with, you know. And that kind of realisation of childhood fantasy has happened a lot.” 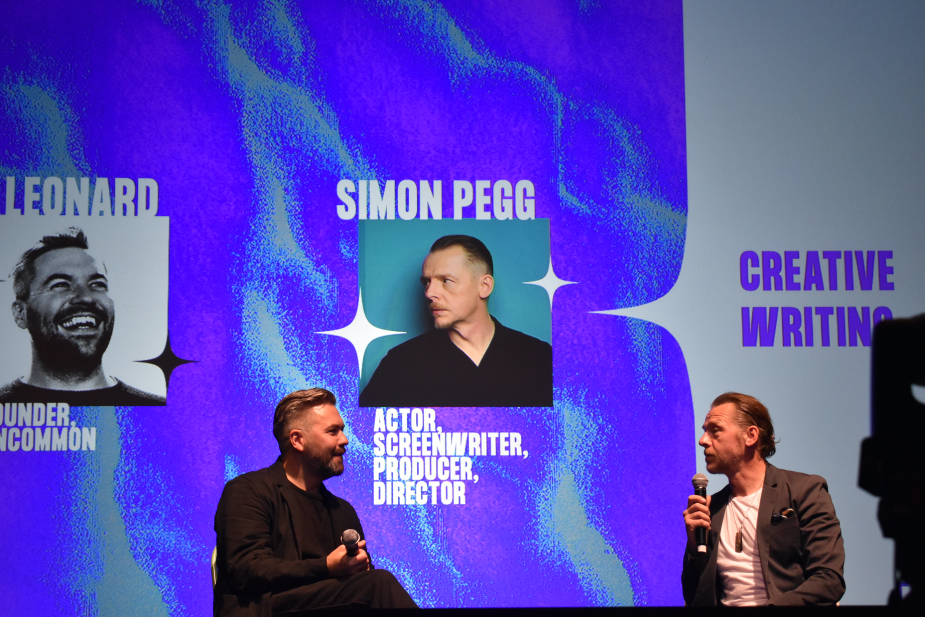 That idea of self-belief - the belief to pursue one’s creative dreams, the belief to overcome the blank page - in the face of cynicism led the pair to discuss the relationship between mindset and manifestation. Nils suggested that the prevailing negative attitude baked into aspects of British culture ran counter to the belief that creatives need - something seen in the current government’s decisions to slash funding for and divert resources from arts education.
“I think we're an incredibly creative nation. We have such a huge pool of talent and we always have done musically, culturally, I mean we make a huge noise for a little island in the North Sea. There are bigger countries out there who don't do as much as we do you know and are brilliant for other reasons.  But in terms of music and theatre, film. I'm really proud to be British,” said Pegg.
“I mean it's so important. It's so important for us culturally in terms of our national morale and stuff; it's something we're really good at, I think the government in that respect, just take it for granted, they think ‘ah it doesn’t matter’. You know, they just think, maybe because it comes so easy to us, maybe because we are font of amazing creativity... but it's stupid that it's not the fostered, it is moronic that it’s not fostered.”
And talking of fostering creativity, Simon also suggested that we owe it to ourselves to nurture and keep nurturing our own individual growth as we get older. As he and Nils discussed the peculiar ageism in the ad industry - other areas of arts and cultures celebrate older rockers and directors and artists - Simon shared his own experiences opening up to new developments.
“If you are going to get old you have to stay in contact with what’s current, what’s new and not rely on your old tricks. You have to be an old dog who can be taught new tricks. Tilly, my daughter, she’s got into BTS, K-Pop and I’m an old indie kid, a goth and [I thought] I don’t listen to crap like that. … And I listened to and I love K-Pop now! I just can’t get enough,” enthuses Simon.
“I think the danger is that you stop in terms of your creative awareness, and you stick to what you know,” he added. “As such, younger people come up underneath and they're all buzzing with new stuff and new ideas and they're on the vanguard… And people, particularly advertising, they want to work with fresh ideas because you're constantly trying to outdo the last wave or do something new. And so, you have to be plugged into the new and the young people are.”
Looking ahead to the blank pages yet to come, Simon spoke about getting stuck into the advertising industry and a future project with Edgar Wright, which the pair will start writing next year. Ultimately, Simon wants to fill those blank pages with ideas and creations that last for years to come.
“The greatest achievement that you can hope for as a creative is that your creation persists. In the film world there’s a lot of emphasis on box office, the opening weekend but really the most important thing is that in 20 years later people are still talking about that film. There are films that had a huge box office opening weekend that no one remembers now… I would rather be known for something that is talked about than something that is materially talked successful in the moment. As a creative, you want to make things that have an effect and become influential.”