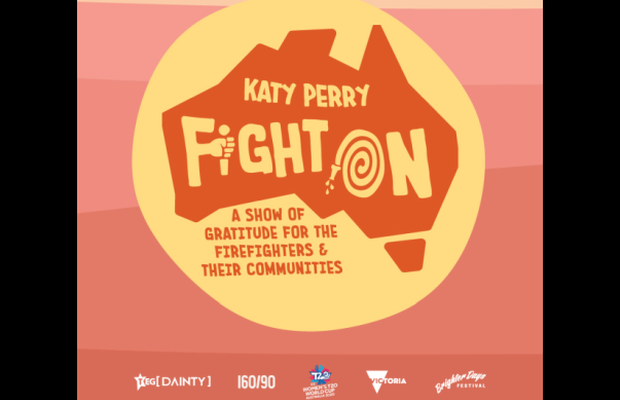 Due to arrive in Australia for her performance at the final of the ICC Women’s T20 World Cup 2020 on Sunday March 8th at the MCG, Katy Perry has today announced a free concert in Bright, VIC for firefighters, their families, and the affected community on Wednesday, March 11th.

The performance, which Katy has named FIGHT ON, has been made possible thanks to Visit Victoria and the ICC T20 World Cup, with the support of a number of partners including TEGDainty, 160over90, Ticketek and the Brighter Days Festival, who have provided full use of their event infrastructure for the concert.

Of the visit, Katy Perry said: “As a native Southern Californian, I know firsthand the devastation of wildfire across my home communities, and was particularly heartbroken by the Australian bushfires. Australia has always given me so much love and support so FIGHT ON is one way to return that love, and help provide a little bit of joy to a country that’s given me so much joy.”

Victorian Minister for Tourism, Sport and Major Events Martin Pakula said: “We’re thrilled that Katy is extending her trip to perform in regional Victoria. It will be incredibly exciting for communities which have had a really tough summer and recognise the outstanding efforts of our emergency services.”

ICC T20 World Cup 2020 CEO Nick Hockley said: “We are thrilled that Katy is coming to Australia to lead the celebrations for the ICC Women’s T20 World Cup Final on International Women’s Day and the fact that she has decided to stay on to brighten the spirits of those impacted by the bushfires in regional Victoria is testament to how much she cares and the role model she is.”

People can also register their interest to attend here.

Performing during both the pre-game show and the post-match celebration, Perry will be part of what is anticipated to be the biggest women’s cricket match of all time. Fans can buy tickets to all matches, including the women’s final, from just $5 for children and $20 for adults. Tickets are available now at t20worldcup.com.

160over90 China Appoints John Steere as SVP and Managing Director