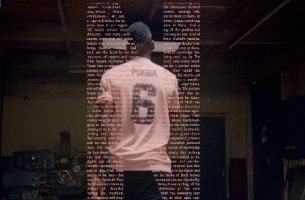 Manchester United and adidas have launched their new pink away kit for the 2018/19 season, and 19 Sound were once again asked to compose the sound design and score for the film.

The pink colour for the kit was inspired by the Manchester Evening News' famous ‘Football Pink’ publication, which is printed on pink paper. This connection formed the basis of the creative idea for the film itself from The Corner, London

The film features Paul Pogba, navigating his way through the history of Manchester United. He walks through an old printing factory picking out key moments of the clubs history that have been reported on in ‘Football Pink’

The music is made up of sounds that you would normally associate with an old fashioned printing press.

A time before the internet and online publications. A time when people would have to physically purchase a newspaper to receive the news of the day.

So we began by creating fast paced, clattering rhythms using old typewriter sounds & conveyor belts. This created a bed for the rest of the soundtrack to work.. The cutaways in the edit allowed us to interject this with real sounds of machinery, factory noises and paper clattering. We were well on our way by this point having already created a dynamic soundscape, full of energy, rhythm and attitude.

Once we had this solid foundation in place we were able to incorporate the main musical theme. We had already constructed the skeleton of the track already, so It was just a question of filling in the gaps.

To fit in with the previous two films and continue the narrative, we focused on high energy grime basslines, layered with trap inspired rhythms that matched the rhythm of the typewriters that had already been put in place..

Paul Pogba arriving in the final shot whilst the beat hits its peak is the highlight of the film and really hammers home the message.

THAT's 'Work From Wherever' Is the Satirical Answer to Hybrid Working