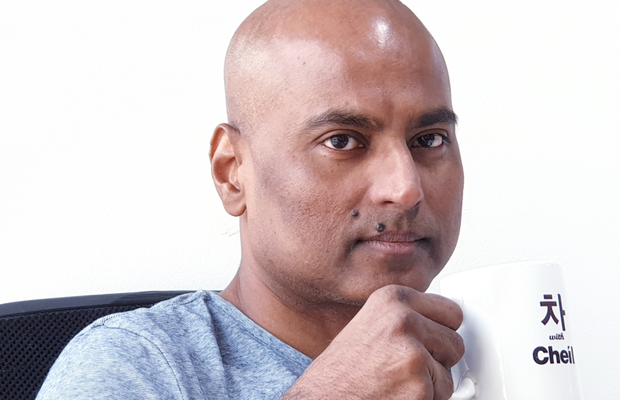 When Emmanuel Upputuru joined Cheil India in 2018 as CCO, he said that what attracted him to the role was the agency’s focus on the blend of creativity and technology, “I think, creativity is more powerful when applied to the whole business, beyond just marketing.” And with two decades of experience and a wealth of campaigns under his belt, he is plenty qualified to discuss what creativity is.
However, his career didn’t start out as such and as a young boy he followed the ‘Indian dream’ of being a cricketer, didn’t do well in school and was at a loss of what to do next. It was fortunate then that his father was working in Ogilvy India’s finance department and introduced him to the aspects of a creative agency with his pick of which line he should pursue. While he may have begun his career sorting out newspaper clippings, he was given first-hand experience on just what goes into each aspect of conveying a brand’s message.
Now as he and the team at Cheil India find themselves in a more certain position than they were a few months ago, he speaks to LBB’s Natasha Patel about the importance of understanding technology, teaching himself to be an art director and the power of the idea.

LBB> Tell me about your childhood and early days - were you aware of the creative industry growing up?

Emmanuel> I was born in a place called Nellore in the southern state of India, Andhra Pradesh. But after three years my Dad came to Delhi to join an advertising agency called Alfred Allan. So New Delhi is where we grew up. I did work in Mumbai for a couple of years. But I came back to Delhi because it is greener and a little more spacious.

LBB> I know you say you got into the industry due to not doing so well in school and your father who worked in the industry, tell us more?

Emmanuel> I wanted to be a cricketer like millions of Indian boys. But by the time I realised I won’t make it, the academic ship had passed by. My father was in the finance department at Ogilvy at that time. When he realised that I wasn’t going to be an engineer or a doctor like most Indian parents wanted their children to be, he told me: “Finish your graduation I will put you in an agency”.
So after doing Masters in Political Science he described three departments of an ad agency: media, creative and account management. I wasn’t confident of writing so creative was out. I considered myself an introvert so I thought I can’t be in account management, so I said media.
At the same time, I saw the writer at the agency making four times my salary for half the time he was giving. And I thought I could write better than him. So that’s how I started venturing out for a copywriter’s job. RK Swany BBDO is where I started in the copy department.

LBB> What did those early years teach you about the industry, and also your own personal creative flair?

Emmanuel> In advertising I started out in the media department, my job was to make invoices with a clipping of the newspaper that carried the advertisement. I used to visit newspaper agencies and go to archive sections and pull out old newspapers. The ads used to be in column inches. That taught me the value of every centimetre that the client has to shell out to communicate their brand’s message.
At Contract, when I joined as a junior copywriter, I was working with the best minds in the business at that time. So a lot of time I was just absorbing everything that was being done. Besides proofreading and helping with copy for annual reports and danglers I used to help my boss V Sunil with visuals from the Black Book for his campaigns.

LBB> I know you didn't have a formal art education but you're a writer, copywriter and art director - how have you adapted your skills over the years?

Emmanuel> I used to follow three sets of people. The first ones were my peers in the same agency or in other agencies, I was competing with them. The second set included people one rung above me in the industry, I was chasing them. And lastly people who were right up there. Like Tom McElligot, Luke Sullivan, Neil French, Helmut Krone. These were role models and people who inspired me. Inspired by Neil French I also art directed some of my ads and won too.

LBB> You’ve been in the industry since the ‘90s, and of course so much has changed between then and now in India. Which of these changes have stood out to you the most?

Emmanuel> It’s not the same industry that I joined some twenty years ago. When I joined the industry print was the main medium. There were convent-educated English copywriters who would write the Queen’s English with a chip on their shoulders. I survived them, even won awards in print categories.
Then the middle class exploded and the market gave birth to copywriters from the cow belt who wrote, with many chips on their shoulders, in the language of the masses, Hindi. While I was a wanted writer, because of my awards, agencies were a little sceptical of my Hindi. But only a little, because they still went ahead and hired me. I survived that phase too.
Today as technology is disrupting every industry it looks like we have entered an age that is programmed for people who can provide solutions with the language of ideas. Lots of people are scared of digital and technology. But I treat it as another language. Let’s talk about how to connect with the consumers.

LBB> Looking at India today, the pandemic has changed so much. What are the big changes for you and how do you see them moving into the future?

Emmanuel> Everything is shifting to online. Ecommerce is the next big thing, so we not only have to have systems in place to make that happen but enable a smooth user journey. We need a different kind of mind-set to help the consumer in the journey, creatively.
We are surrounded by data, digital and technology. It is very difficult to focus these days, because the moment you get familiar with anything, something new comes up, a new platform, a new way to sell, a new way to tell your story. In all this chaos, I tell my teams, unless you bring something unique to the table, you can become a commodity. What will stay forever is the power of the idea. The rest is all imagination.

LBB> You worked on the campaign for Cleartrip after talking to people in an airport about the purpose of their flights. How did you come up with the idea for this campaign?

Emmanuel> While going for the pitch, when I looked around the flight and a thought occurred to me… each one of us had a different purpose of traveling. I was going to Mumbai to win the pitch and others…you can imagine!
I presented this observation itself as the main idea. The client agreed to send us, the agency and the production house to the four corners of the country to ask real travellers just one question, “What’s the purpose of your trip?” We had over 200 answers. We took all the footage and put it together into one beautiful narrative.  We finally won the pitch!

LBB> How many of your insights come from human connections?

Emmanuel> Well, can there be an insight without a human connection? My mind keeps observing things and it can’t help but connect with brand stories all the time. I discovered that people are the best storytellers, we are just curators.

LBB> Looking at the coming year, I know you're about to start planning for this year's Diwali campaigns, what direction do you think those will go in?

Emmanuel> The work for this year’s festival campaigns is still work in progress. However, I can tell you a bit about our last year’s campaign #RewardYourself for Samsung, because the conditions are somewhat similar. While every brand went the emotional heart-tugging way, we took a more light-hearted route and encouraged people to indulge in a bit of self-love and pat themselves on their back for all that they endured during the pandemic. It is always a tough ask to do humour without being insensitive, but we managed well I think.

LBB> Outside of work who is Emmanuel and what do you do to unwind?

Emmanuel> I entertain my children with certified dad jokes. I read a lot, start the day with the Bible. I watch a bit of content here and there to stay up to date with the latest shows, cricket, tennis and soccer. I write and attend church meetings regularly.