Newly appointed ECD at BMF on co-founding #ONLYONEINTHEROOM to promote diversity in the industry, growing up in East London in the ‘80s and the leap of faith it took to move to Australia 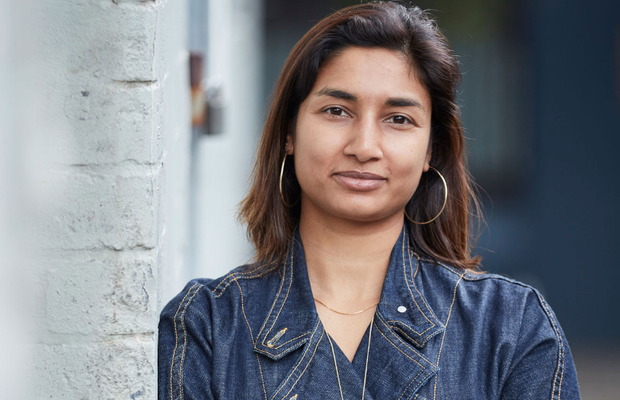 A few months ago Pia Chaudhuri was named as Australian agency BMF’s executive creative director. After 17 years in the industry and roles held in both her current home and birthplace of the UK, Pia’s career has been full of excitement along the way. But, she’s not just a creative at heart and as a champion of diversity Pia recently teamed up with Coffee Cocoa Gunpowders’ Ant Melder and M&C Saatchi Australia’s Avish Gordhan to create #ONLYONEINTHEROOM.
The initiative was designed to create a more diverse advertising community in Australia by rallying those in the industry to act on ensuring there is more representation. For Pia, this is something she’d been aware of from a young age though she is hoping to use her position to speak out for those who need it.
To find out more about the platform, Pia’s career and what prompted her to move from London to Australia, LBB’s Natasha Patel caught up with Pia to hear more.

LBB> We have to talk about your involvement in #ONLYONEINTHEROOM. It’s such a great cause and one that needs to be talked about, so how did it all begin?

Pia> I was one of the founding members of #ONLYONEINTHEROOM, alongside Avish Gordhan (M&C Saatchi) and Ant Melder (Coffee Cocoa Gunpowder). It was the culmination of a year's work, as the three of us looked at ways of promoting diversity in our industry. We initially found that we were working on initiatives separately, and felt it would be more powerful to join forces.
We had lots of ideas as soon as we came together, but decided an overarching platform would allow us to work on a variety of initiatives under the same banner. Our founding partners were B&T, with the launch of the Diversity Award at this year’s B&T Awards, and Trinity P3, on an industry-wide diversity index, which will be launching soon. The platform and launch film were a collaboration between diverse people representing more than 20 cultural backgrounds from across our industry.

LBB> Where did your own personal involvement in wanting to represent diverse backgrounds come from, and has much changed in this way since the start of your career?

Pia> As a diverse person in this industry, I’m a minority, but I am also lucky enough to be in a position where I’m able to have a say in how we do things. While I’ve always experienced the challenges of my background in advertising, it’s only over the past few years that I’ve been able to create opportunities and drive change for other diverse people.
For example, I’ve always acted as a mentor to junior diverse people, but now I can have a say in hiring practices. I’ve always believed in being representative in our work, but now I can make a call on the stories we tell or our casting. I’ve always supported causes or initiatives that drive progress, but now I can create them and garner support from others. In short, my beliefs around diversity haven’t changed since the start of my career, but my remit has.

LBB> Going back to your early years, am I right in thinking you grew up in the UK? What were those early days like and was there a prediction that creativity would be your calling?

Pia> I grew up in a pretty rough part of East London in the ‘80s. It was all gangs, violence, poverty and racism – worlds away from the hipsterville it is now. For most people, life was about survival, including for my family. But I was always creative. I loved drawing, and writing, and making stuff out of toilet roll holders and cereal boxes.
My mum taught English as a Second Language (ESL) to immigrants at a community centre and then went on to teach at secondary schools in the area. So she understood the value of creativity for education and development and was really encouraging. And I was prolific. When I was seven, I’d handmade over sixty books and was featured in a BBC educational documentary with my mum.
By the time I went to secondary school, my parents expected me to focus on academic subjects for my career and writing as a creative outlet. They wanted me to be an engineer or lawyer or doctor – typical Asian parents. But my favourite subjects were Art and Graphic Design so there were lots of disagreements at home. In the end, I followed my heart (gross) and did Art and English all the way to university.

LBB> You studied graphic design at the University of Brighton, how much did that play into working in advertising?

Pia> My university course played a huge role in where I am today. The design course at Brighton is renowned for being super conceptual. We’d sometimes get one-word briefs, and I even did a painting in response to once. But when I studied there, I had no idea about the ad industry, or that a ‘creative’ was a legitimate job that existed. It was only after a random chat with a friend who worked at an agency in London, a few months before I graduated, that I found this out. She got me an internship over summer and I pretty much never looked back.

LBB> What lessons did you learn from your first roles that stuck with you?

Pia> I learned pretty early on that I was more interested in non-traditional advertising. I loved getting into the psychology of why audiences engage with things, and finding ways to connect, rather than relying on paid media. This shaped my career path – both in the type of agency I worked at, and the kind of work I sought to make.

LBB> How did you wind up in Australia from there and what creative differences were there between the two regions for you to get your head around?

Pia> In the UK at the time, if you worked in advertising, you really had to live in London. And as a Londoner, it meant working in my hometown. Granted, it’s probably one of the coolest, most vibrant, creative and interesting hometowns you could ever hope to have, but I still needed to escape. I came to Sydney to visit a friend, fell in love with the place, and decided to apply for a couple of jobs. I lined up some interviews before I left and ended up getting a job the day I arrived back in London. I resigned, worked my notice and came straight back out here. That was nine years ago.
The biggest creative difference I found was the extremely segregated nature of the work here. Digital agencies did digital, traditional agencies did TV. There wasn’t the integrated thinking or campaigns I was used to working on and seeing in London. For example, the agency I worked at before I left was originally an ‘experiential’ agency but the last campaign I created also included a TVC. It was truly ideas-first and channel second. That’s something we still haven’t cracked in Australia.

LBB> How have communications and consumer values changed since your early days in Australia?

Pia> Sadly the biggest change I’ve seen is ever-shrinking budgets and timelines. But this is definitely a global problem and not exclusive to Australia.
To return to my initial topic around the lack of diversity in our industry however, I think the work itself hasn’t changed enough. Yes, Australian culture has probably evolved a little, and is marginally more inclusive, and this has been reflected in the work somewhat. But Australia is one of the most multicultural countries in the world, and this is far from represented in our industry. I believe this has had a profound impact on the type of work we create. Until we have more diversity of thought in our agencies, I don’t think we will reach our potential as an industry.

LBB> Finally, where does your creative inspiration come from?

Pia> I mostly find creative inspiration in non-advertising. I love podcasts like This American Life, The Moth and Reply All as they’re brimming with weird and wonderful human insights. I’m always doing a side project of one kind or another so love doing Masterclass courses to help with those. I highly recommend Roxanne Gay’s ‘Writing For Social Change,’ or David Sedaris’ ‘Storytelling and Humour.’ He is hilarious. I’m really into foreign and independent film. I went through a big Spanish film obsession at one point. I’m also really enjoying the resurrection of The Face for keeping track of what the next generation of creatives are up to these days.

These Ads Encourage Would-Be Investors with Humorous Stories of Beginners

Life's a Treat for Pampered Pets in Cute Petbarn Spots