Terri Meyer and Sandy Greenberg founded Terri & Sandy, one of America’s best independent agencies, 10 years ago - LBB’s Addison Capper chatted with them about ‘building their own table’, their most successful year yet during Covid, and the experience of running an agency as two creatives 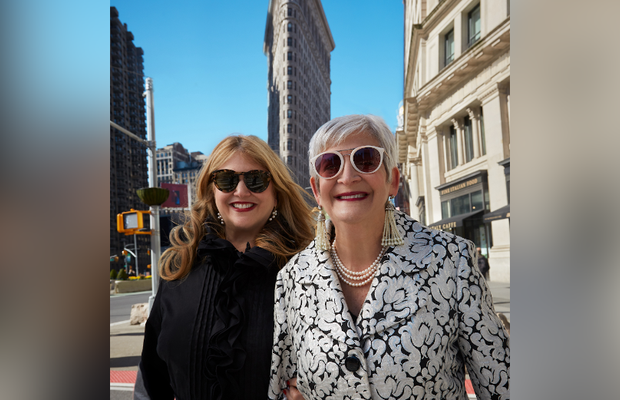 Terri Meyer and Sandy Greenberg are one of the only female career creative duos to open and run an independent agency. What's more, that agency - Terri & Sandy - is smashing it. 10 years into the game, they just experienced their best ever year - right through Covid.
The pair came up through big agencies as an art director (Terri) and copywriter (Sandy) team before rising through the ranks at DMB&B, JWT and FCB, where they were co-ECDs at a time when only 3% of creative directors were women. However, while in those roles, multiple CCOs, all men, came and went due to the fact that they weren't properly qualified for the position. It inspired them to leave, open Terri & Sandy on Terri's dining room table, and pen their mantra:  “If you don’t have a seat at the table, build your own table.”
LBB's Addison Capper was pumped to get the opportunity to check in with Terri, Sandy and that table.

LBB> You have been a creative duo since you were both AD / CW. To get started I wanted to ask you about how you actually became a duo. I always find the smooshing together of two creatives quite interesting - so how did you end up together and why did it feel like a good fit at the time?

Sandy> We met over 25 years ago under the St. Louis Arch. I was a copywriter and Terri was an art director at D’Arcy, Masius, Benton & Bowles.  At that time, DMB&B was one of the largest agencies in the world, and the St. Louis office attracted creative talent from all over the country. The promise: come here and build your book so you can go on to one of the great advertising cities of the world.
Terri> We both had different partners at the time. But in Sandy’s review with her boss, he said that she would benefit from having a stronger art director and mentioned my name. Looking back, it’s strange seeing how prophetic that was. We actually became best friends before we became a team. We were always talking about work and ended up partnering Ivory Shampoo, which was NOT the best work of our career.

LBB> Fast forward to now, I think it's quite rare for a creative duo to go on to launch an agency together - at least I can't think of too many examples, it's usually a creative person with a more 'business' focused exec...

Sandy> We cannot think of any exclusively creatively owned and led agencies either - and when you layer on female-owned, it’s even more unusual.
We had serious reservations about starting the company without an account person - we were worried clients might have concerns about lack of process or organisational skills. But it has never, even once, been an issue. Bottom line, while Terri and I are creative people, we are also business people. We are extremely strategic and care deeply about creating highly effective work.
Terri>  I’m thrilled we never took on a third partner. I always joke: “Sandy is all I can handle.”

LBB> How did it come to be that you stayed as a duo, even as you climbed the ranks of seniority? As you joke, you've outlasted many marriages!

Sandy>  When we met many years ago, we had no idea we’d stay together all these years. It just worked out. We had fun together; we laughed a lot, let’s face it. If you’re going to spend eight, 10, 12 hours together every day, you better get along well. Second, we respected each other both personally and professionally. We were also equally driven. That’s important. I’ve seen partners split up because one person was more ambitious.
It really helps to have a strong creative partnership to weather the advertising storms. We creative people put our hearts and souls into our work and probably only 5% of our ideas move forward. Your creative  partner becomes your emotional support, your refuge, your confidante, your comic relief.

LBB> And then, why did you decide to launch Terri & Sandy?

Terri> We loved our time at FCB. We stayed 15 years. However, during the recession, and after a big merger, the agency got too political and frankly dysfunctional. The leaders were jockeying for power. It seems hard to believe it, but people actually tried to steal our accounts. Also, multiple CCOs came in, all men, who weren’t qualified for the job and for the first time it struck us: we had hit the proverbial glass ceiling. By the way, at that point in time, only 3% of creative directors were women. That’s when we decided: “If you don’t have a seat at the table, build your own table.” And so in 2010 we left and started Terri & Sandy on my dining room table.
Sandy> First and foremost, we were ready to run our own show. We had a vision for what an agency should be - fast, smart, fun, with a huge entrepreneurial spirit. Our mission was to treat people with respect and decency. Terri and I read a book called ‘The Power of Who’ by Bob Beaudine and we were really struck by the line: “Go where you’re celebrated, not tolerated.” It has become our guiding principle. Not just in how we treat our team but in terms of the types of clients we seek.

LBB> And how does the fact that you're both creatives influence how you run your own agency?

LBB> With that in mind, how do each of you run the agency? Do you both have quite defined roles or not?

LBB> You touch every piece of work that comes out from Terri & Sandy - how do you manage that as you scale and evolve? And why is that still important, even as I imagine it becomes trickier for you to do?

Terri> We definitely let some things go, but, at the end of the day, our work is what we have to show. And the quality of the output is everything. The good news is that 98% of the time Sandy and I agree on what ideas we love. Pretty uncanny. That eliminates churn and enables us to move very quickly.
Sandy> We often get that question: ‘How do you scale that?’ We’re proud to say we have amazing talent at the senior level and those people are stepping up and leading the agency to an even greater place.

LBB> You are currently the number one most effective indie agency in North America according to the Effies. What do you think that says about the work you do at Terri & Sandy?

Sandy> We are extremely proud of our status as the number one most effective indie agency in North America. We believe our effectiveness sets us apart from other agencies. Many super successful, award-winning creative people have asked us, with a touch of envy:  “How were you able to start your own agency?” It’s because we have extremely strong client relationships built on years of mutual success together.

LBB> As you mentioned earlier, your motto is “If you don’t have a seat at the table, build your own table.” Can you speak a bit more about the inspiration behind that train of thought? And how is it a reflection on the ad industry of 2021

Sandy> As I mentioned, we watched multiple men come into the CCO role at our last agency who were each gone in six months. They simply were not qualified for the role. Sexism has always been rampant in advertising - just ask Peggy Olson. For us, witnessing sexism firsthand inspired us to start our own business. Fortunately, we believed in ourselves and decided we would not be held back.

LBB> You have long been champions of diversity and are constantly building programs to increase minority representation at the agency. Could you speak a bit about those programs and how you go about really making them have an impact and ensuring the diverse workforce that you have at Terri & Sandy?

Terri> As a women-owned business, we have diversity in our DNA. We often say: “Hire a mosaic” and do our best to live up to this goal. It certainly isn’t easy because it means changing the very recruiting and hiring process that we’ve leaned on for years. Here are a few concrete steps we’ve taken over the past year:
The results of these new recruiting efforts have been very positive thus far.  As of January 2021, 30% of our new hires are people of colour.

LBB> Is there a piece of work from Terri & Sandy that you're most proud of? Maybe one campaign that really felt like things like were clicking?

Sandy> I’m super proud of a campaign we created for Barba Men’s Grooming Boutique during the pandemic. Barba was closed and our goal was to keep the salon top of mind. We launched Quarancuts Virtual Hair School: one-one-one guided haircuts, over Zoom, by Barba’s founder, Xavier Cruz. It really made a difference in the life of this small salon, not to mention its clients.
Terri> I am most proud of The Little Mermaid 30th anniversary video. We took something from our culture - The Little Mermaid - and showed its impact on people from all walks of life. It was incredibly meaningful.

LBB> And looking back across your entire careers, is there any particular piece that stands out? You can choose different ones!

Terri> I still love the Super Bowl spot we launched for Planters with the hilarious woman with the unibrow. It’s an incredible feeling to land in the top 10 on USA Today’s Ad Meter.
Sandy> OK, Terri went with the Super Bowl; I’ll go with the Olympics. During the Beijing Olympics in 2008, we ran a beautiful spot for Oreo with two young girls on passing trains connecting - one American, one Chinese - while twist, lick and dunking Oreo cookies.