Marco Spier, founder of Psyop and director of the spot for Resorts World Las Vegas, speaks to Addison Capper about getting to grips with virtual production and why the technique “will absolutely be the future of production” 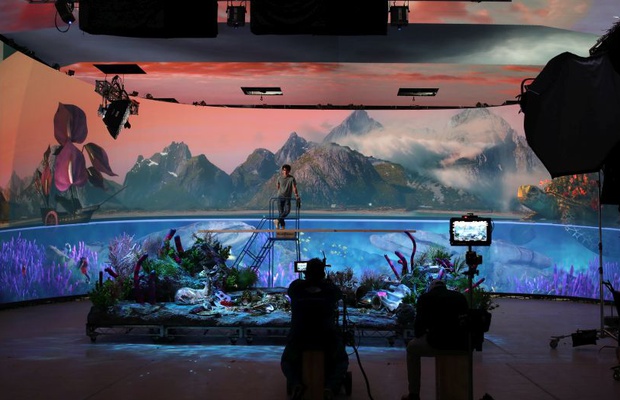 'Stay Fabulous' is the world's first commercial production realised entirely by utilising virtual production, the immersive, wholly game-changing filmmaking technique pioneered by the creators of Disney+ series The Mandalorian.
Brought to life by Psyop, well-known, long-time innovators in the commercial filmmaking world, the spot promotes the opening of Resorts World Las Vegas, a $4.3 billion, 3,500-room luxury resort in Las Vegas that's set to open on June 24th. Creative was out of California-based Hooray Agency and it features the likes of Celine Dion, Carrie Underwood, Katy Perry, Luke Bryan, Tiësto and Zedd.
Given that the technology is still in its infancy and many involved were properly using it for the first time, Psyop tapped Nant Studios to aid with production, using much of the same team and approach from The Mandalorian. The team at Psyop and its partners developed new ways of working that allowed themselves to make creative changes real time during the shoot including lighting, colours and animation within the sets - all things impossible without virtual production.
To find out more about this project and its implications for the future of commercial filmmaking, LBB's Addison Capper chatted with Marco Spier, founder of Psyop and director of the spot.

LBB> Tell me about the foundations of this project - how did it come to be and at what point did virtual production come into the conversation? Was that a starting point or a creative solution to the idea?

Marco> The new Resorts World Las Vegas sounded to be like the resort of the future. Everything I read about it was very technology-driven - from getting there using the Boring Tunnel, to checking in, to ordering food - so it felt natural to use technology to help to bring this to life. Honestly, I have been looking to use this virtual production for quite a while, so here it seemed the perfect fit.

LBB> This is the first ever spot made fully in virtual production. Did this fact affect your approach at all? What kind of pressure did that add?

Marco> Honestly, it was a lot of fun and we made sure all went according to plan. We had a great team and I felt very comfortable building the environments. I had some time to design the surrealist worlds and so were able to really focus on all of the details. By the time we coordinated all the celebrities' availabilities, the sets were ready to go. It does blend the two disciplines, animation and live-action naturally. 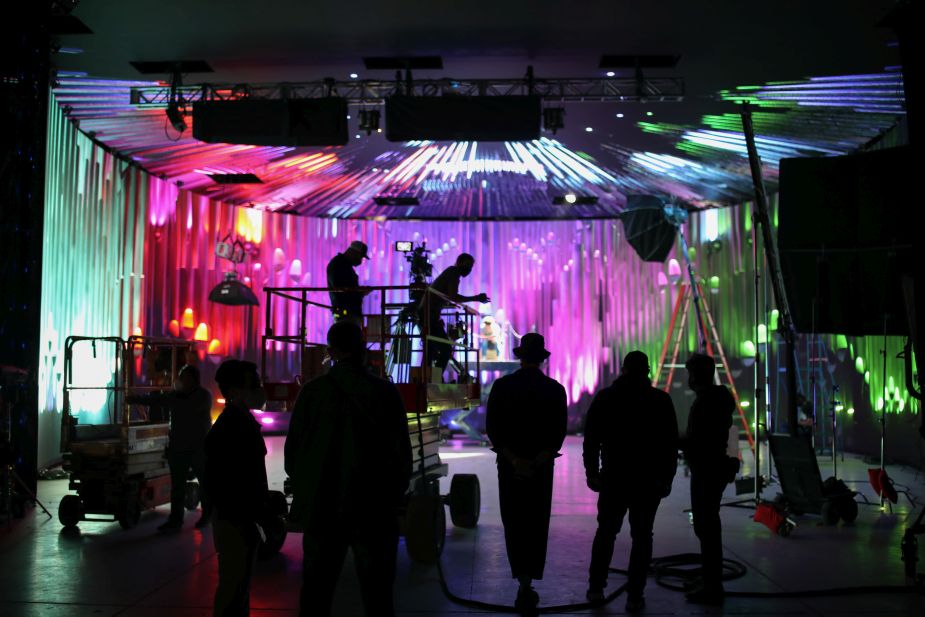 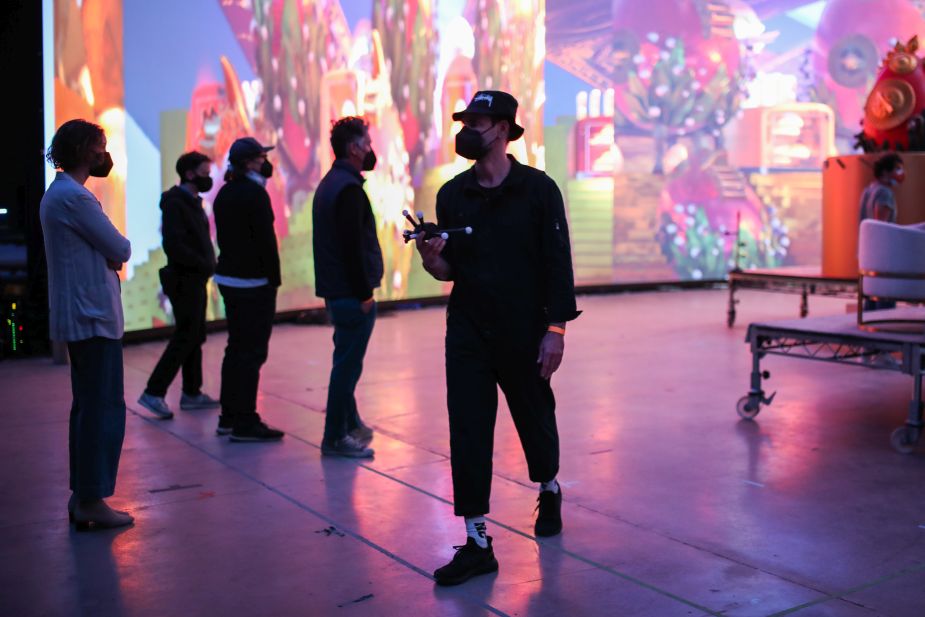 LBB> Given that this is a completely new approach to filmmaking, how did Psyop as a production company prepare for it? Have you been experimenting with virtual production prior to the shoot?

Marco> We have been working with Epic on another big project in Unreal, and they helped us every step of the way. Having a bit of a safety net from Epic definitely gives you more confidence that it will get done. But in the end, most of the things that needed to be done to build those sets are very similar to the process Psyop is used to. I worked with Pakorn Bupphavesa, one of our most trusted leads with who we did quite a lot of VR projects in the past. We also built a team with ERG who also played a big part in getting us ready for the shoot.

LBB> And for the shoot itself, what was the pre-production and research process like for the spot? And how did that differ to a more 'regular' production?

Marco> The big difference is that you have to have the post ready when you begin to shoot... essentially, preloading the post. There was also less time for real post production, so what you shoot is what you get. I really liked that, because you have to commit to the scene on the day, just like you would have to when you have a practical set. You look through the lens and you can see exactly what you will get.
It's a bit like building a practical set, actually.  Even for the build, you go over to the studio, load the scenes and look at the progress on the screens, and dial in changes. And yes, there is also a practical set that needs to be built at the same time, so a lot of coordination needed to happen between the practical set and the virtual set to make it seamless. So when our art director and I made changes to the practical set, we had to also adjust it in the virtual set and vice versa.

LBB> You worked with Nant Studios, who worked on The Mandalorian. Perhaps an obvious question but why did you get them involved in the project and what did they bring to it?

Marco> With the technology being as new as this, you want to surround yourself with a team that has done this before. Between our DP Matthew Jensen, who shot some of the Mandalorian, Nant studios, and Epic we had some great knowledge going into this. Nant really let us play and allowed us to explore what else we can do. Our sets, of course, were quite different from the sets built for The Mandalorian. We made very stylised surreal sets and needed some time to explore them. Together, we invented some new techniques, where we would use additional screens within the volume to make practical objects and people appear to float on the ocean, for example. 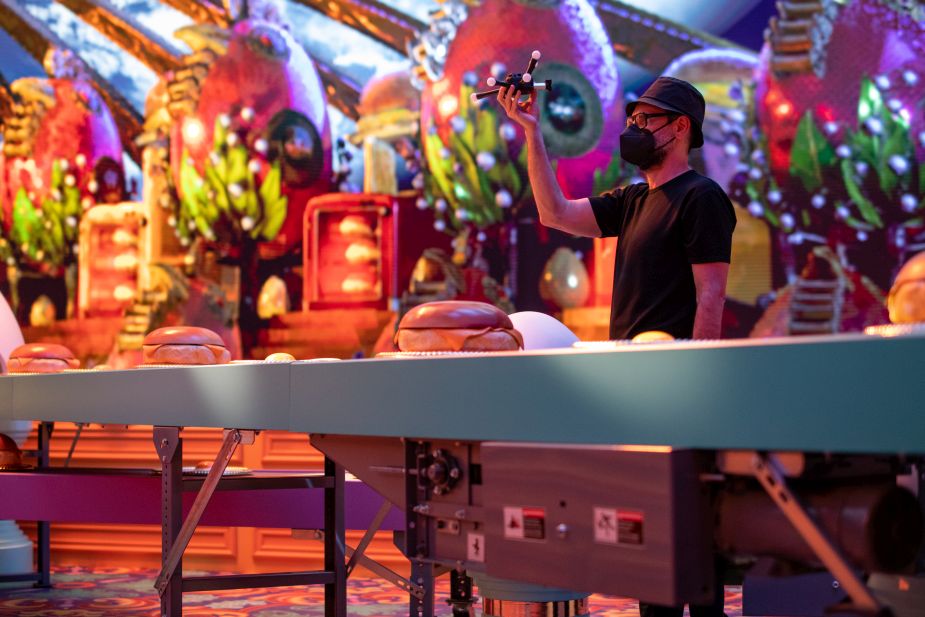 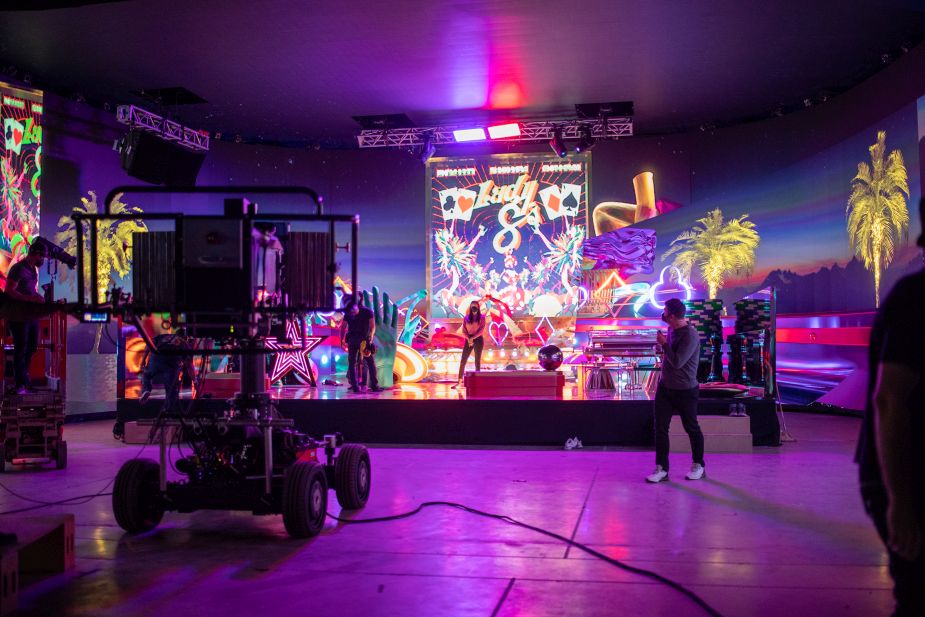 LBB> With virtual production, your 'locations' are really whatever you show on the screens, right? How do you approach this element? Is it a case of preparing all of the digital aspects prior to the in-person shoot? How did you deal with this?

Marco> I'm used to inventing every pixel on the screen from my background in directing animation. In live-action, when you find a real location, you get inspired and possibly augment them so they feel right to the project, but there are a lot of beautiful things already in there and nature makes a lot of decisions for you. For example, beautiful mountains with a nice forest, and the trees have a certain kind of leaves on them, and the sun would light it in a very beautiful way. With animation, and in this case virtual sets, you need to design every little detail of the world. The good thing about that is that you can dial in a lot of things that make it very unique and help tell the story. I love this kind of full-on worldbuilding.

Marco> Once you shoot you can fully focus on what you capture on film and on the performance of the talent. Of course, in the back of your head, you hope the scenes are not crashing or something completely unexpected would happen. 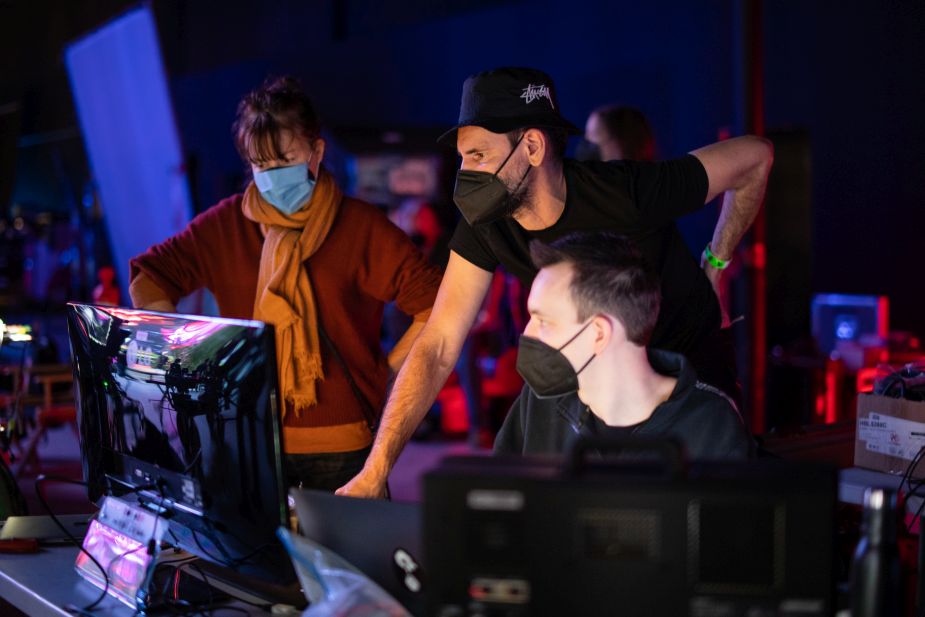 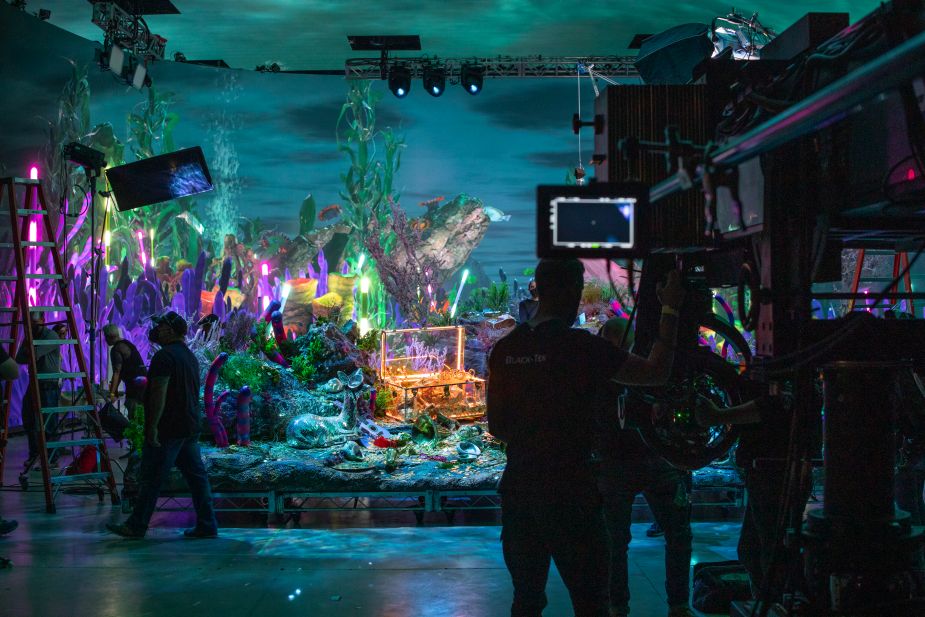 LBB> Can you think of any occasions where the possibilities of virtual production - such as last-minute changes - allowed you to create something that otherwise might not have been possible?

Marco> Being fully immersed in a fully animated world where the actors see the world surrounding them and also being lit by that world while you capture all this on camera.... is pretty impossible to do any other way.

LBB> What did you learn during this process that will serve you well in future virtual productions? And were there any lessons that will guide the way you approach regular live action and/or animation in the future too?

Marco> I have always been trying to blend those two worlds - animation and live-action - since starting Psyop. My camera moves in live-action are inspired by anime, for example. My set designs and stories are always some sort of journey through a surreal world of dreams or imagination. I augment reality most of the time to create this unique world… so the virtual set is another tool to help blend reality with the reality in my head. 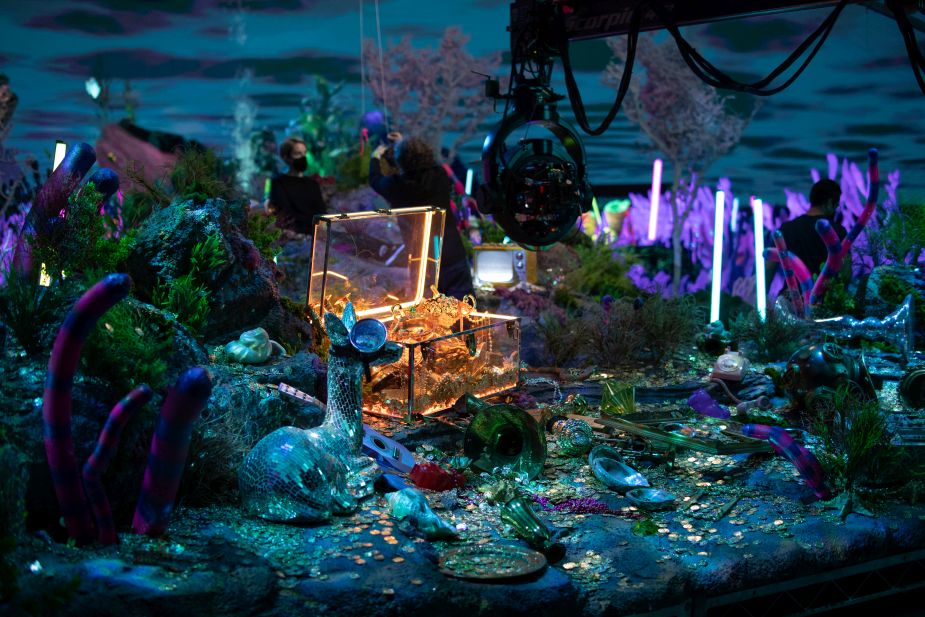 LBB> What were the overall trickiest components and how did you overcome them?

Marco> I like fast-moving big camera moves with wide lenses. This was something a bit limiting using this technology. Longer lenses and smaller moves work better on virtual sets, so that took some adjusting for me.

LBB> Now that you've got this spot under your belt, what are your thoughts on the future of virtual production for commercials? Will it be a revolution?

Marco> With the technology advancing at the pace it is right now, it will absolutely be the future of production. Realtime renders are looking better by the minute. Quixel is scanning the world and creating a library of locations and the next thing you know you will find yourself in the metaverse.

LBB> Personally, how does it feel to have worked on the first ever virtual production commercial?

Marco> We started Psyop to invent new things, explore and disrupt as much as possible, to blend art and technology. Make cool shit and nerd out while doing it. So, yes, I'm super happy to do more of those things in the future.

Marco> The energy and excitement surrounding us as a team while we were exploring new territory together is what makes me love what I do so much. For me it felt like landing a rover on Mars.

As Lockdown Lifts, This Game Teaches You How to Get Back Into the Real World