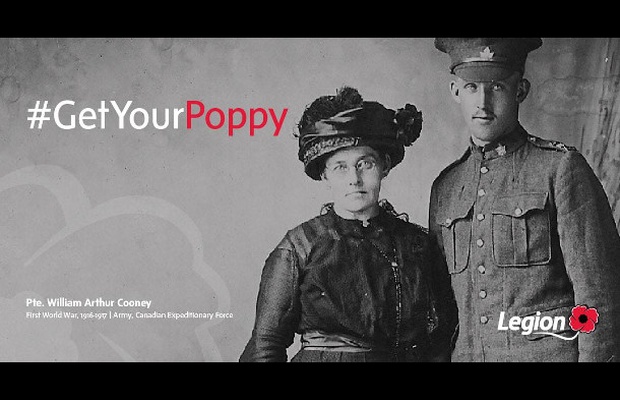 The Royal Canadian Legion’s Remembrance Day Poppy just became digital, for an online fundraising campaign that is the first of its kind in the world. Available at www.myPoppy.ca from October 26th, 2018 to Remembrance Day, November 11th, 2018, the new ‘Digital Poppy’ will complement the traditional lapel Poppy and help drive donations for the Legion’s Poppy Fund. Canadians will be able to personalise it, dedicate it and share it online – and add their own family stories and images – as their pledge to never forget those who served and sacrificed for our freedom.
The Legion’s digital Poppy campaign was developed and is managed by Basno Canada, the world’s leading digital award and certificate supplier. It is built on Basno’s verified, digital certification technology and platform. DDB Canada has provided creative direction and social execution, and Critical Mass has provided website creative development. DDB Public Relations has taken the lead on public relations programming, including strategic approach, launch media relations and influencer activities. Google and Facebook are providing digital media support.  TELUS Corporation is the campaign’s exclusive corporate partner.
“The emergence of new media technologies is causing major change to traditional forms of not-for-profit fundraising, with fewer people available for ‘on-street’ sales,” said Robin Lecky, partner at Basno Canada. “Furthermore, an increasingly cashless society means reduced per unit donations.  Consequently the digital Poppy was envisioned as a unique opportunity for the Royal Canadian Legion to boldly address these issues and support their annual Poppy Fund campaign in an innovative way.”
The introduction of the digital Poppy, and the opportunity for online donations, represents a fresh, invigorated approach to the Legion’s annual national Poppy campaign as it presents a new, modernized source of funding for the PoppyFund. It is designed to reach younger audiences of potential donors who recognize and embrace the impact and power of social media-based initiatives like the digital Poppy.
“Canadians have enthusiastically supported the Legion’s lapel Poppy campaign for many years and the traditional ‘on-street’ donations will continue across the country. But we wanted to give younger audiences a new and current way to support their Veterans,” said Danny Martin, deputy director of The Royal Canadian Legion. “The Legion’s new digital Poppy campaign will allow people to donate online and widely share their remembrance in a meaningful, personalized manner.”
This first-ever 2018 digital Poppy launch is being supported by a number of leading Canadian personalities, athletes and organizations including recording artist Justin Bieber, artistic luminaries Margaret Atwood, Sandra Oh and international model and actor Ashley Callingbull, and Hockey Night in Canada’s Don Cherry and Ron MacLean. Several organizations including the National Hockey League Players’ Association, the Teamsters Union of Canada and Ancestry.ca, are also participating.
“For every Canadian, the bright red Poppy stands for our country’s greatest values, and the debt we owe to the brave souls who put everything on the line to fight for us,” said Don Cherry. “I’m dedicating my digital Poppy to my great Uncle, Sergeant Thomas William MacKenzie who died in battle four days before Armistice Day in 1918.”
Once downloaded, the digital Poppy can be posted on the donor’s social media feeds of their choosing including: Facebook, Twitter, Instagram, and LinkedIn. Digital Poppy owners will also have the option to use their digital Poppy as their profile images as well as adding personal stories and significant photos to their postings.
“We’re honoured to support the Royal Canadian Legion, in partnership with Basno Canada, and launch the first-ever digital Poppy campaign,” said Lance Saunders, president and chief operating officer, DDB Canada. “We’re confident our creative input and public relations efforts will give this program the boost it needs for long term success, as an ongoing source of funding for the Legion’s valuable veterans’ programs.”
All funds raised from both the traditional lapel and the new digital Poppy are directed to the Legion’s Poppy Fund. This is the first time that Canadians will be able to donate in such a manner, online. The Poppy Fund is a significant fundraising initiative for the Legion and supports essential programs and services for all of Canada’s Veterans, including Canadian Armed Forces and RCMP, and their families.