Great Guns director Olly Blackburn helms new spot for Theraflu, encouraging viewers to get their flu shot and protect those around them 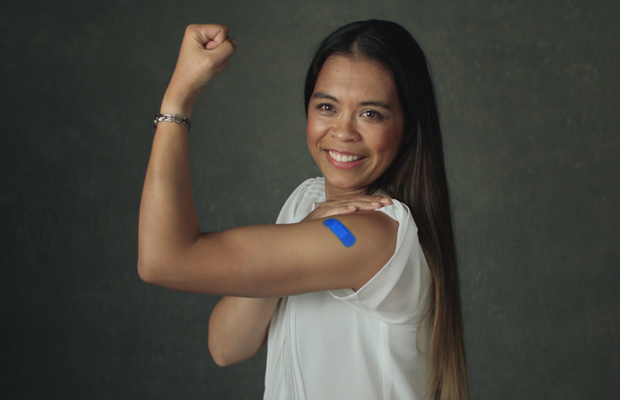 Great Guns director Olly Blackburn has debuted a new spot for cold and flu medicine Theraflu, encouraging viewers to get their flu shot and protect their loved ones. Creatively devised by Saatchi and Saatchi, the ad recognises that one tiny moment of discomfort is worth it for the chance to keep those around you safer and healthier.
The 30-second spot features a series of people, lit against a photographic backdrop, having their flu shot. Focusing on each person’s face, we watch as they wince slightly in the moment before quickly recovering from their discomfort. The imagery is accompanied by the suggestion that a ‘little bit of ouch’ results in a ‘whole lotta love’ as the flu shot helps us not only protect ourselves, but the people we care about.
For director Olly Blackburn, the essence of the spot was to perfectly capture the feeling of discomfort or sheer nerves before the procedure - followed by the relief or realisation that you’d had the shot and not even realised. The performances of the actors were therefore central to the ad, embodying these natural human reactions to an experience that everyone is wary of. In order to cast actors who reflected these ideals and appealed to a distinctly American audience, Olly used photojournalism images from photo essays about the American midwest as references, asking casting director Kharmel Chochrane to source a pool of people that embodied an authentic and relatable approach to flu shots.
Olly Blackburn comments: “I’m a very performance-based director, strong casting and performance are at the heart of everything I do. Connecting with my characters and joining them in their journey will always be one of the most important elements of the job for me. Casting is a really tricky thing to get right, and I insisted on spreading our net very wide. I’d look at the tapes and for the actors who seemed ‘in the zone’ I’d start building little stories in my mind, like which region or city in America they might be from. I’m a British director living in California who’s travelled a lot in the U.S, and have family here too, so that was a perfect fit for a UK agency-led shoot aimed at an American audience.”
Due to Coronavirus restrictions, the shoot took place in London whilst Olly directed remotely from Los Angeles. To ensure everything ran smoothly despite these extra logistics, the team established clear, separate lines of communication with three key sources. Via Zoom, Olly was able to move between the producer, agency, and 1st AD after each take, receiving feedback and relaying messages to each with minimal disruption to the shoot. These separate, one-by-one processes evolved into a formal routine for those on set, helping to structure the shooting day and maintain clear conversations between everyone involved.
Olly Blackburn adds: “We were really well prepared for the shoot and I knew everyone on the team so we went into it with a really good head on. The whole basis of this campaign is that fear of getting a shot and the relief as soon as it’s done, so we had to think about methods to replicate those feelings in really believable ways. Interestingly the fear of a needle isn’t due to the shot itself, which is often so slight you barely feel it, but the anticipation. I’ve directed a lot of thrillers so know a bit about suspense - we had a few different forms of stimulation ready from ice cubes to a fork to an elastic band. I’d play with anticipation times once the camera was rolling and the actors couldn’t be sure of what type of feeling they were going to get… or when.”