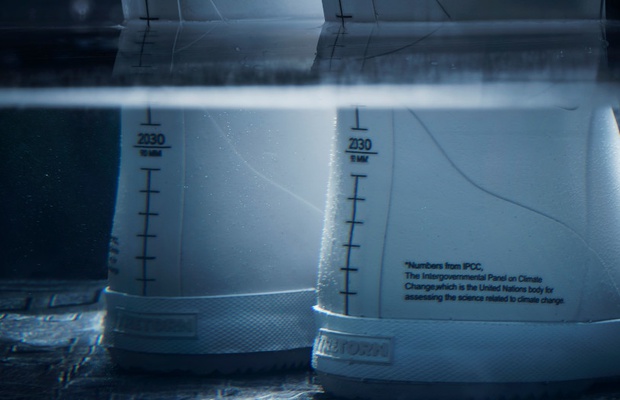 Outdoor brand Tretorn and charity Sea Life Trust are launching a limited edition of Tretorn’s iconic rain boots, labelled 'Sea Level Re-Boot'. Not only are they made from sustainable and recycled material, they each have a printed measuring stick indicating how sea levels are expected to rise during the coming decades due to the climate crisis.
According to IPCC’s calculations, sea levels are expected to rise by more than 10 inches (26 cm) by 2050 unless necessary actions are taken against global warming that’s melting the ice on the Earth’s poles.
“The climate crisis is very real, but sometimes its’ effects can be hard to visualize. With Sea Level Re-Boot, we both have a way to highlight the very concrete effects of climate change, but also to inspire people to take action”, said Erica Hyttfors, Head of CSR and product development at Tretorn.
Called Sea Level Re-Boot, the rain boots are produced in a limited edition sold in stores and online. The boots have the iconic design Tretorn is famous for and are made from sustainable and recycled material.
But the most striking detail is what’s printed on the boots. On the back of each is a measuring stick, but not the usual kind showing centimeters or inches. Instead, it shows us the coming decades, indicating how high the sea is expected to rise due to global warming.
The raw materials used in Sea Level Re-Boot have been carefully selected to minimize environmental impact. Both the outer sole and the upper is made of FSC certified natural rubber, and the lining is recycled polyester. On the inside, the insole is “BLOOM”, a unique algae biomass that when growing in the oceans harms its surrounding environment. When harvested and put under heat and pressure it undergoes a plasticization process, making it suitable as a raw material in the Sea Level Re-Boot.
The Sea Level Re-Boot is only the first step in changing how the company’s best-selling product, the rain boots, are designed and manufactured. Beginning with the spring collection of 2022, all new styles of Tretorn’s rain boots will consist of FSC certified natural rubber and recycled polyester. A big undertaking, but a natural next step in the company’s sustainability platform, called the Eco Essentials Initiative.
For Tretorn, Eco Essentials highlights the broad range of actions taken by the company during many years to create both sustainable products and business models. Prior to releasing the Sea Level Re-Boot, Tretorn has long used recycled materials to produce their famous clothes.
“We constantly go through all the material we use for our products, questioning whether we could exchange one material for something more sustainable. What we’ve learned is that in most parts it’s actually possible to achieve, without compromising with quality and price. It’s a matter of challenging ourselves”, said Erica Hyttfors.
Behind the initiative is Tretorn together with Sea Life Trust, a charity organization working globally to protect the world’s oceans and the marine life that lives within them. The proceeds from the sales of the Sea Level Re-Boot go directly to the organization’s important work, including the Beluga Whale Sanctuary on Iceland.
“We’re delighted that Tretorn is supporting us in our mission to protect the world’s oceans. The boot’s message is simple; with the measuring stick being such an effective way to highlight sea level rises and we applaud Tretorn’s commitment to making a positive difference”, said Ali Corbett at Sea Life Trust.