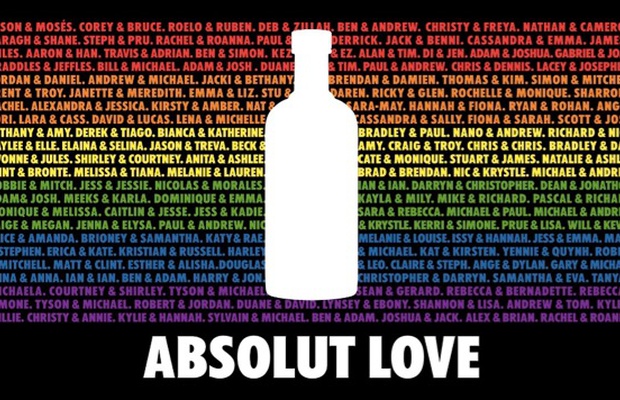 Today Absolut has announced the launch of Absolut Love, a campaign developed by Cummins&Partners Sydney, that celebrates the stories of Australian marriage equality since the historic YES vote in 2017.

As part of the campaign, Absolut has created one of its iconic posters aligned to its major partnership with Sydney Gay & Lesbian Mardi Gras.

The campaign will see Absolut create one of its iconic posters. Instead of featuring its bottle, Absolut will be featuring the names of 282 of the LGBTQI Aussies who have created history and said 'YES'. The poster will be unveiled at Sydney Gay & Lesbian Mardi Gras' Fair Day on Sunday 17th Feb.
Couples were invited to submit their names to Absolut, as well as share their stories of what the YES vote meant to them. Absolut has also partnered with celebrated Australian visual artist Scott Marsh, to paint two of the loved-up couples at sites in Chippendale and Surry Hills.
Says Eric Thomson, marketing director, Pernod Ricard Australia: "Absolut is a brand that has a long history of championing equality and acceptance globally. We wanted to bring this to life in an authentic way which celebrates real stories of marriage equality ahead of the Sydney Gay and Lesbian Mardi Gras, who we are proud to be a major partner of for the second year."

Says Kirsty Muddle, managing director, Cummins&Partners Sydney: "There are 6,000+ people in this country that married someone they love since the YES vote, it's a signal of Absolut Love in Australia and that's something worth celebrating."

Starting today, the fully integrated campaign is supported with work from One Green Bean, Blue 449, AKQA and PIM Group.

As part of the Absolut Love campaign, Absolut are showcasing the core theme of equal love and celebrating what this means for the LGBTQI community and beyond.

Says Terese Casu, SGLMG CEO: "We're excited to be partnering with Absolut again for our Fearless 41st Festival. Absolut has a long-standing legacy of supporting the LGBTQI community across the world, and we are proud to be celebrating the achievements of marriage equality with them this year."
The 2019 Absolut Love posters will be on display throughout Sydney, Melbourne, Brisbane, Adelaide and Perth from Feb 18th. Each couple featured will receive their own copy of the poster. Additionally, Absolut has donated $20,000 to Sydney Gay & Lesbian Mardi Gras community programs that go towards grants, scholarships and creating greater access for disadvantage LGBTQI people to participate in the festival.