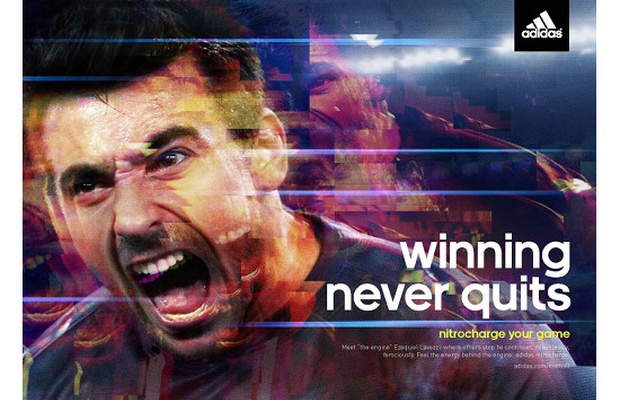 adidas has launched Nitrocharge, a completely new silo of football boots to join the Predator, f50 and adiPure ranges currently on the market. Working with United State of Fans\TBWA, Hill + Knowlton Strategies, We Are Social, FITCH and Tribal DDB Amsterdam, adidas has pulled together a campaign that spans across Advertising, Comms, PR, Social, Digital, Retail and Experiential.

The new boot has been designed for a specific type of player, known as ‘The Engine’. This player is seen as someone who is always on, running, tackling and passing with relentless energy and absolutely no fear. This player type reflects the technology incorporated in the new boot which is focused on increasing and retaining as much energy as possible. Both this idea and the player-type to go with it have been key to the over-arching campaign and provided the inspiration for every facet of it.

Lead Comms agency United State of Fans\TBWA worked on the creation of the Nitrocharge advertising campaign. Part of this campaign was shot in Barcelona with a selection of the key faces who will be wearing the new boot and the campaign at large. The 60-second-long television campaign launched on 16th May and was screened at the UEFA Champions League Final in London and will be aired throughout the world during key football matches over the next few weeks. The ad, directed by Tristan Patterson with music produced by Nikolai von Sallwitz (AKA Taprikk Sweezee), mirrors the idea of ‘The Engine’ with a fast paced, energetic concept that brings this player, and the boot, to life. In the first week of launch, the spot has amassed over 2.4M hits on YouTube.

Alongside this, a partnership with sports statisticians Opta was formed, conducting research into exactly what ‘The Engine’ player is through development of an algorithm. Hill + Knowlton Strategies, the global football PR agency for adidas, then worked on developing the idea of ‘The Engine’. Ahead of the boot launch imaginative visuals representing the new ‘Engine’ players and building on the Opta partnership created a story around this player type with football and sports media. This helped to tease information about the origins of the boot and begin a conversation that ultimately led to the launch of the boot.

We Are Social led the conversation across social media throughout, driving interest in #TheEngine and teasing the boot to fans ahead of the launch. adidas’ lead social agency for global football are also working on a concept called ‘Power Pitch’, an event which will bring to life the energy technology in the boot and put to test groups of players who will aim to prove themselves as the ultimate ‘Engine’. These players will have been recruited through smaller events in local markets around the world including France, Italy, UK and 2014 FIFA World Cup host country, Brazil – where the final Power Pitch event will also be held.

Digital agency Tribal DDB Amsterdam created the innovative nitrocharge.com online platform where fans are able to engage with the brand through a digital experience that includes a mobile motion navigated game, a product experience and ‘the Engine room’ which forms an online hub for  the entire social media and PR content created throughout the campaign.

Retail design agency FITCH brought the Nitrocharge campaign to life at point of sale. Across 2D graphic and 3D experiential design, FITCH delivered a complete suite of flexible tools to support the boot’s launch in both 3rd party retailers and adidas’ own branded stores. Taking shoppers on a seamless customer journey – from attention-grabbing window displays and engaging display units, through to the Launch Zone takeover and point of purchase at the till – FITCH created an engaging brand experience across a variety of different touchpoints along the path to purchase.