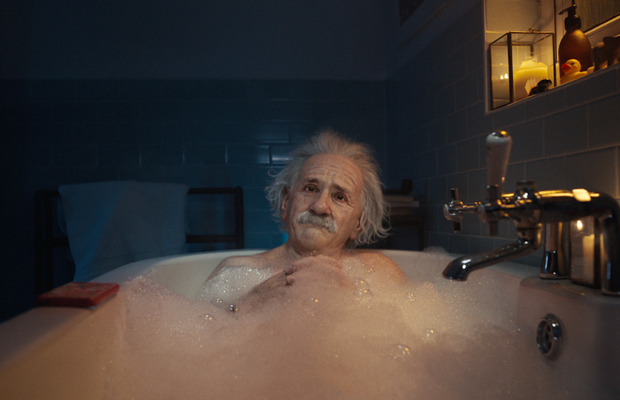 Smart Energy GB has enlisted the support of Albert Einstein to front its latest campaign, ‘Join the Energy Revolution’ which launched last week.

The new campaign, developed by AMV BBDO, with visual effects by The Mill, sees Albert Einstein transported from the 1950s to the present day using the latest CGI technology. He is amazed by some of the innovations that have happened since his lifetime, but can't understand why Britain has not sufficiently upgraded its energy system. In this integrated campaign, a series of ads across TV, YouTube, social, radio and print, Einstein explains smart meters' personal and environmental benefits in his own charming way.

The launch 40 second ad is designed to introduce Einstein to the audience, connect him memorably to smart meters, and land the core messaging around infrastructure. Four weeks down the line, with Einstein established as the voice of smart meters, shorter-form 20 second copy will be distributed, dramatising the many benefits of smart meters from helping Great Britain reach net zero to saving consumers’ money.

In consumer research Einstein was found to personify ‘smart’ as well as having the ability to create surprise and deliver a wide range of messages.

Global production partner The Mill were tasked with re-creating a digital version of Einstein using performance capture and CGI. A team of visual effects artists developed bespoke software and creative pipelines to ensure the photo-real digital avatar of Einstein was as high fidelity and realistic as possible. Using cutting edge 4D volumetric capture technology to record the performance of an actor, subtle facial performances and intricate details were then recreated in CGI, before the team meticulously groomed each hair, wrinkle and eye detail on the CGI model.

Chris Taggart, director of marketing at Smart Energy GB, said: “There is no greater ambassador for modern technology than Albert Einstein.  We hope the public really enjoy seeing his wit and humour touchingly brought back for this campaign.  He reminds us that while we have started to embrace smart technology in many areas of our lives, our energy system has fallen behind. He reminds the British public that smart meters will help to modernise our national energy system, and encourages them to get one installed and get Britain energy fit for the future”.

Yishai M. Fraenkel, vice president and director general at The Hebrew University of Jerusalem, said: "Albert Einstein was ever-curious about innovation and ways to improve the world through technology. He had a fascination with new, innovative, yet simple and straightforward technology. Being a great humanist, he cared for the planet’s well-being and its inhabitants. It is a great opportunity to bring him into millions of homes through the use of modern CGI technology, supporting the values behind this campaign."

The concept and ad was developed by AMV BBDO, produced by Global Production Partner The Mill, the social media components were produced by Gravity Road who created more than 25 ‘Einstein Selfies’ and media planning and buying was through Omnicom Media Group’s PHD.

Matt Swinburne, creative director at AMV BBDO, said: “Who better to convince Britain to get smart meters than the smartest man to ever live? Creating full CGI humans is very challenging, and we were lucky to have the Mill’s magic to pull it off. We hope the charming genius will make people smile and make that call to their energy suppliers.”

Alex Hammond, head of 3D at The Mill comments: "Tasked with the exciting but hugely ambitious ask of re-creating a digital version of Einstein, we had to create a unique and groundbreaking visual effects pipeline in order to create an avatar that was truly convincing. Our visual effects team, including facial shape experts, spent months researching and developing a robust toolset so we could convincingly portray the nuances of Einstein's personality. We used cutting edge 4D volumetric capture technology to capture the performance of an actor. This was then used to re-create subtle facial performances and intricate details in CGI. We developed a bespoke system at The Mill to process and export facial data, before our team meticulously groomed each hair, wrinkle and eye detail on the CGI model."

Personality rights of ALBERT EINSTEIN are used with permission of The Hebrew University of Jerusalem. Represented exclusively by Greenlight.

Making the Grade: Bringing Intentions to Life with James Bamford

Christmas Magic: How To Put Summer On Ice