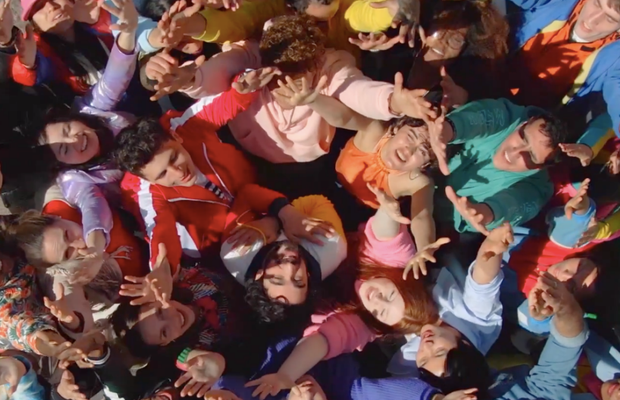 If Covid-19 has done anything, it’s taught us that there’s more that unites us than divides us. That’s why the world over we’ve seen patterns and behaviours crop up again and again. And one such pattern is the way that young people, being less likely to die from the illness and also confident of their own invincibility, have been keen to get out, socialise and flout safety rules and advice.
Poker Beer is a brand popular with young people in several Latin American markets, and they’ve taken it upon themselves to call out bad behaviour among their core audience. To that end DDB Colombia has created, together with director Luciano Podcaminsky, a vibrant musical that makes fun of selfish attitudes and behaviours. On the one hand, it’s a bright, poppy film that combines Lala Land vibrancy and TikTok dance trends. On the other, it’s a brutal lyrical take down. LBB’s Laura Swinton caught up with DDB Colombia creative team to find out more.

LBB> What was the strategy behind this campaign and why was tackling irresponsible youth behaviour a really important topic for Poker Beer as a brand?

It is young people who have experienced frustration and disbelief while facing the virus and social distancing during the pandemic. This is why people are now returning to their social lives, and many of them are doing it with a complete disregard for safety measures and putting their friends’ health at risk. Poker, the brand that stands for friendship, decided to take action and remind youths about the importance of approaching these encounters responsibly.

LBB> What thoughts and insights led to the idea of doing a musical?

In order to tell a story, a musical combines group choreographies and lyrics in the form of dialogues; our choreography was a fitting way to express that longing for fun and recreation, and it ironically contrasted the song lyrics, that were inspired by the sentiments young people were unconsciously expressing through their behaviour while facing the pandemic’s issues.

Poker is a brand that talks about friendships, which is why it must behave as young people’s friend. This is the reason why Poker’s role in the campaign was to be that friend who is conscious and critical of the situation, the one that speaks candidly and sarcastically just like youngsters do for others to realize their mistaken and irresponsible behavior while facing the pandemic.

LBB> How did you write the song? And how did you come up with the melody?

Based on a previous study by the brand, we wrote the lyrics based on young people’s verbatim opinions about the pandemic, all thoughts that reflect their unconscious and careless feelings. The first step for the musical screenplay’s creation was the lyrical composition, and once we did that, we wrote the story’s situations and finally we composed the melody. It was all a co-creation process between the agency, the client, the audiovisual production company, and the musicians that were in charge of the musical production.

LBB> The art direction was so bright and colourful - why was that important?

The musical’s intention was to ironize the young people’s ‘wrong’ behaviour, and to attain this we had to show the world as it is seen through their eyes: perfect, beautiful and so far away from the pandemic’s tremendous reality. This is exactly what we were looking for with the film’s color; we wanted to demonstrate to them that even though everything seems beautiful, what’s happening around us demonstrates exactly the opposite.

LBB> In terms of musical genres, this film feels like it combines the spirit of films like Lalaland and the dance scene in 500 Days of Summer - obviously with a musical there are so many creative directions to go (rousing and epic like Les Mis, sexy and dangerous like Cabaret or Chicago) so how did you figure out the *kind* of musical you wanted to do?

We always wanted to produce a modern film that youths could identify with. This is the reason why we used a current language that connects with youngsters, while keeping some of the elements that are typical of a classical musical and reinterpreting others. The casting, the costumes, the art direction and even some of the dance steps are a subtle Tik Tok imitation and some of the elements that demonstrate a production inspired by current trends.

LBB> Why was Luciano Podcaminsky the director you chose to work with and what did he bring to the project?

Luciano is a world-renowned director with an international career. We were convinced that he was the ideal director for this project because of his experience, talent and -above everything else- because of his particular point of view about the film from the very beginning. His contributions had a forceful impact on the film’s story narrative, and he also looked after every aspect of the production from the beginning to the end, which is clear by looking at the end result. We are perfectly happy with this work.

LBB> How did you keep the shoot within regulations and Covid safe for the crew and cast?

The production took place in Uruguay, the main and most important reason being that this is one of the countries least affected by the pandemic, thanks to locally imposed controls that guaranteed the safety of every single person that participated of the production. Plus, we also rigorously followed every biosafety protocol imposed by the Uruguayan government.

LBB> What were the most interesting aspects of the production from your point of view?

This production called for a multicultural talent that would add to the final result and would allow us to produce a campaign with great impact in Colombia, Peru and the Dominican Republic, the countries where the film would be broadcast. We never expected a better outcome, and we are very proud of having produced a wonderful film with a responsible message for young people, that was created with the participation and contributions of a lot of people through video chat platforms from different places in Latin America. All of these efforts turned into an incredible campaign in the midst of a pandemic.