Ambev Trucks Make a Rainbow on Brazil's Most Famous Avenue

In the month of LGBTQIA+ pride, a campaign from SunsetDDB highlights an action that will donate BRL 1 to NGOs for each story told on Twitter bearing the #OrgulhoNãoPara (PrideDoesn’tStop) hashtag 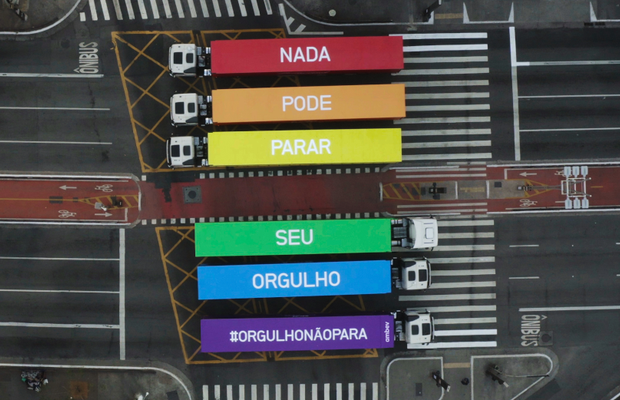 A pioneer among Brazilian companies in supporting LGBTQIA+ diversity and inclusion, Ambev hit the streets last Sunday, 21st, in a different way. Consumers' favourite beverage brands lent their colours to support the cause, and the company's trucks paraded across Paulista Avenue, in São Paulo, forming a rainbow. Paulista is perhaps Brazil's most famous avenue and a symbol of the LGBTQIA+ fight for rights. All that to show that pride cannot stop.

The initiative, which featured trucks of Budweiser, do bem, Skol, Guaraná Antarctica, Antarctica and Skol Beats, kickstarted the #OrgulhoNãoPara movement, created by the SunsetDDB agency. The movement is an invitation to people from all over the country to share their stories and, with that, help NGOs that welcome LGBTQIA+ young people in situation of vulnerability. For each pride story told and shared on social media with the #OrgulhoNãoPara hashtag, BRL 1 will be donated to the Casa 1, Casinha and Casarão Brasil NGOs.

“A few years ago, Ambev made a commitment to building a more diverse and respectful world. This movement started within the company and was reflected in our work outside, with the pioneering support of pride parades and the launch of campaigns and products with sales donated to the cause," says Bruno Rigonatti, Ambev's institutional brand manager. “In 2020, we are taking another step in this journey to show that this is a commitment of all our brands and to open another space for the LGBTQIA+ community to show their pride,” he concludes.

“The #OrgulhoNãoPara movement is an initiative that strengthens plurality and highlights the importance of diversity. It is an encouragement for people to share stories of love and freedom. In addition to the visual impact, the idea of displaying the colours of the rainbow through several trucks of Ambev's brands shows the company's commitment to the LGBTQIA+ cause,” says Guilherme Jahara, Co-President and CCO (Chief Creative Officer) at SunsetDDB.

To support this movement, SunsetDDB also created a manifesto film that will be released on June 28th, LGBTQIA+ Pride Day.

Uniting people for a better world is part of Ambev's purpose, therefore, the company respects and recognises the value of the inclusion of LGBTQIA+ people.

In 2016, Ambev joined the LGBTI+ Business and Rights Forum and created the Lager employee group – Lesbian & Gay & Everyone Respected – designed to propose and debate internal policies of respect and inclusion. Last year, LGBTQIA+ employees went to Ambev's social media channels to share their experiences and inspire the audience to show their pride.

Just like the commitment is embraced and respected by all Ambev’s brands, external initiatives are an extension of this internal work. An example of the company's pride is Skol, which was one of the pioneering brands in supporting the LGBTQIA+ Parades in Brazil and led campaigns like Respect is ON to celebrate the Pride Day. The brand also created a special edition of cans featuring the colours of the flag and whose sales were donated to Casa 1.