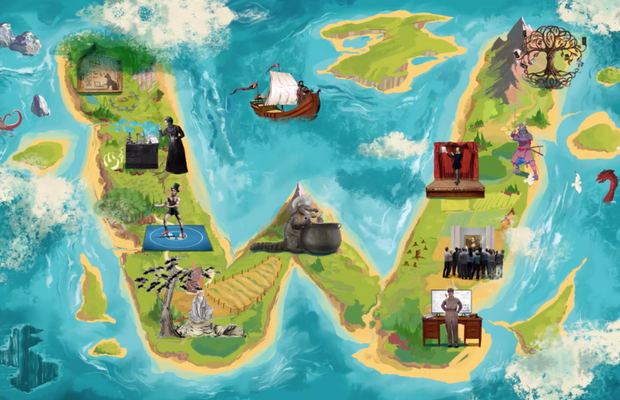 To help promote the multitude of online non-fiction video experiences available at the educational subscription service Wondrium, marketing agency DiMassimo Goldstein has turned to creative studio Taylor James for the production of two fantastical spots to help the brand stand out from the crowd.
The animation-based campaign focuses on showcasing the variety of Wondrium’s offerings through a mixed-media approach. The 60” spots, titled ‘Bird’ and ‘IWonder’, present a mixture of different 2D animations, blended together to create two fluid pieces that cover diverse topics such as atomic power, chemistry, philosophy, art and languages, as well as Egyptian history, and even how to make the perfect burger.
Above:  A clip of 'IWonder'
Tasked with creating fun and engaging spots, Taylor James’ designers and animators let their imagination soar to create the fantastic and whimsical characters. Each style and scene are informed by research and fun facts about the character and the period in history. The team at Taylor James found out that Abraham Lincoln was a wrestler before becoming president. So, there he is, wrestling. Another scene shows Picasso painting in the style of Bob Ross.
Above: A clip of 'Bird'
Thorough research and planning allowed the creative studio to fuse history and math, science and music, and beyond. To bring the imaginative and playful characters to life Taylor James used Illustrator, Photoshop, and After Effects. Originally planning to have six to eight designs per spot, the creative studio ended up with a total of 43 designs and scenes for the two spots, further illustrating the variety of the video experiences available at Wondrium.
David Rasura, Creative Director at Taylor James comments: “The agency had the song written, and an outline of characters singing each part. They wanted a fun, 2D animation of the characters singing to showcase Wondrium’s offerings. We knew who the characters were, and how they were ordered, but it was up to us to figure out how to connect the dots. We got really imaginative. It’s the kind of spot where you really have to get playful.
It was a pleasure working on this project. We worked so well within our own team, the client, the agency, and the music house. It was smooth sailing from the beginning and an absolute joy every step of the way.”