Kong Studio creates LGBTQ+ film ‘You Being You’ for Mencap 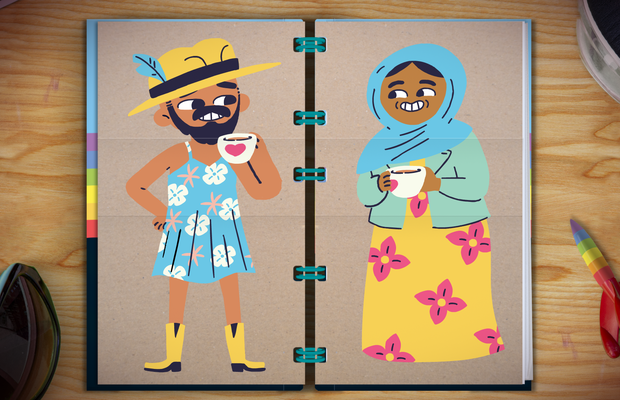 Discussing sexuality, gender identity, gender expression and acceptance of who you are would prove a tricky task for most teenagers and young adults. Add learning disabilities into the mix and the task can become even more difficult to explain in a way to make the viewer feel comfortable and engaged.

When Mencap, with guidance from Gender Intelligence UK, reached out to Kong Studio with a project that aimed to discuss issues around identity and sexuality to young people with learning disabilities, the team jumped at the chance.

Collaborating with character designer Matt Partridge, Kong Studio created an animated explainer video - but with a twist. Done in the style of a mix and match flipbook, and with the supporting voice talents of Ellen Goodey, they show the many ways how people can explore and express their gender identity and sexuality.

The visual device is a vibrant and fun way of showing numerous character combinations, illustrating how we all are unique in our own way.

Tom Baker, co-founder said of the project:  "Mencap’s 'You Being You' film was a brilliant project to work on. How do you explain the many parameters of gender, gender expression, sexual orientation in three minutes to people with learning disabilities? How do you do it in a way that is inclusive to the wider LGBT+ community, but also keep it engaging - and if possible, fun? With multiple writes and re-writes, numerous design revisions, several artists and animators involved, lockdown gave us the chance (and time) to distil the film’s message into something truly cohesive.  We couldn’t be happier with the final result, and special thanks to Ellen - her V.O. is amazing!“

The biggest gauge of the film’s success and effectiveness has to be the feedback received from people with learning disabilities. Richard says: “The video is very accessible and useful. The pictures are very useful and it’s a good guide to see different sexualities and identities. Also, for me, the video can help a person with a learning disability to not be ashamed. The title, ‘You Being You’, is very good. It explains yourself and to be honest about your own sexuality and identity. And finally, the video helps someone celebrate who they are as a person.”

Mencap is the UK’s leading voice of learning disability. Their primary mission being to transform society’s attitudes towards those with learning disabilities, while improving their own and their family’s quality of life.

Kong Picks up Four Awards at the Start of 2021

Kong Studio Spreads Some Positivity with Short ‘A Little Love’