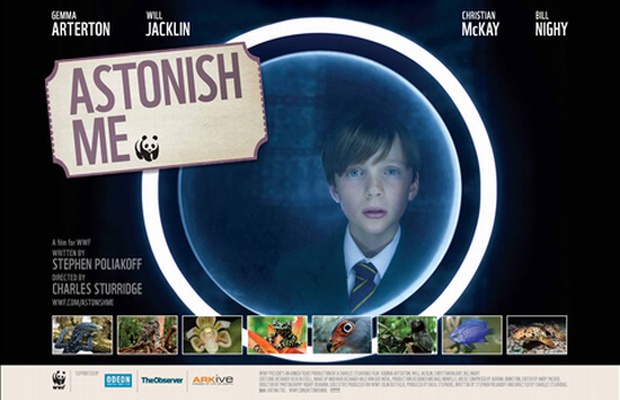 British acting talent Bill Nighy and Gemma Arterton will appear in a fascinating new short film this summer entitled ‘Astonish Me’. Produced by Annex Films the 5 minute short is scheduled for cinematic release to celebrate the WWF’s 50th anniversary. Written by acclaimed playwright Stephen Poliakoff and directed by BAFTA award winning Charles Sturridge, 'Astonish Me' takes viewers on a journey showcasing some of the world's lesser known or recently discovered species, from massive insects to colossal squid, a fish with a transparent head and birds and frogs of every colour. “It's extraordinary in the 21st Century there are so many animals out there that we're seeing or discovering for the first time," said Stephen Poliakoff. "I was adrenalised when I found out just how much had been discovered over the past 10 years. I hope this film will get people exhilarated by the natural world.”

To be screened in Odeon cinemas across the country from the 29 July 2011, this five minute short film combining live action footage and special effects, follows the journey of a young boy who discovers a whole world of new species he never knew existed. Colin Butfield, Head of Campaigns, WWF-UK and Executive Producer, 'Astonish Me', said: “'Astonish Me' shows that the natural world is every bit as magical and surprising as the fictional world you might see in a Hollywood film. We know about less than a tenth of the species that we suspect are out there and I really hope this film inspires a new generation of conservationists to be curious about the natural world and to want to protect it.”

Approximately 15,000 new species are discovered each year, yet we are also losing species and habitat at an alarming rate. Many species that scientists discover are already on the verge on extinction. Charles Sturridge, Director, 'Astonish Me', added: "The thing that I like most is that we’re finding out fiction was right. Jules Verne and all those sailors that talked about monsters in the sea weren’t completely making it up. They’re actually there. Look at the colossal squid. It’s phenomenal. I think it’s incredible that animals that we thought only existed in our imagination are actually out there waiting to be found."

The five minute short film will be screened in Odeon cinemas across the country from the 29 July 2011, and will also be shown before screenings of this year’s summer blockbusters.

You can watch the trailer here