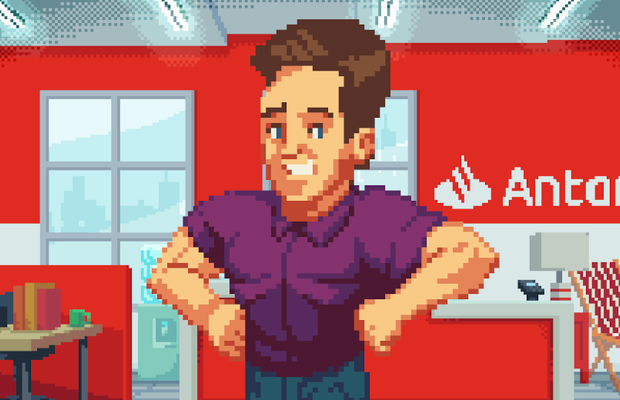 The latest instalment of ENGINE Creative’s Santander campaign features Ant and Dec avatars running riot in a virtual version of the Bank of Antandec.

TV presenters Ant McPartlin and Declan Donnelly bring humour and chaos to the new campaign in which they switch between virtual reality and their in-person roles as CEOs of their own bank determined to take ‘digital’ to the next level.

Ant and Dec don their VR headsets and play around in 'the world’s first virtual bank' – creating avatars and getting confused between digital and real-life. Meanwhile, Santander is concentrating on keeping the digital stuff simple by benefiting real customers with the launch of the new My Money Manager tool in its Mobile Banking app.

The innovative feature spots your spending habits and helps you to exercise greater financial control – in line with Santander’s ambition to 'help people get close to their money'.

Dan Sherwood, director of marketing at Santander, said: “Ant & Dec return to our screens in their now familiar roles as CEOs of the Bank of Antandec taking on a new challenge, a digital one. Not only has their strategy changed, but so have they … and we get to see them for the very first time as avatars in the world’s first ever virtual bank.”

Jo Moore, creative director at ENGINE Creative, said: “It’s always a pleasure to work with those clever two innovators at the Bank of Antandec, even though they’ve yet to deliver. And they fail to do so again in this new campaign, in which their mind-blowing ‘digital banking’ concept is a ‘virtual Antandec branch’ to help their customers stay close to their money complete with virtual Hobnobs. How on earth can Santander compete? The answer is by keeping things simple.”

Santander and ENGINE Creative began working with Ant and Dec in 2019. The result, which has been unashamedly mass market in its appeal and joyous, has driven brand awareness in a category that often takes itself too seriously and achieved significant stand out.

The Bank of Antandec campaign has helped the bank boost business – increasing mortgage applications by 24% in its first year and growing market share by a whole percentage point – and achieve its highest score for brand love. It won Bronze in the Finance category at the 2020 Effies.

The new campaign will be shown on TV, VOD, Radio Social and Digital for the first three months of the year.

Since launching My Money Manager in October, Santander has signed up more than one million new users. To date, it has presented five million+ insights to its customers.