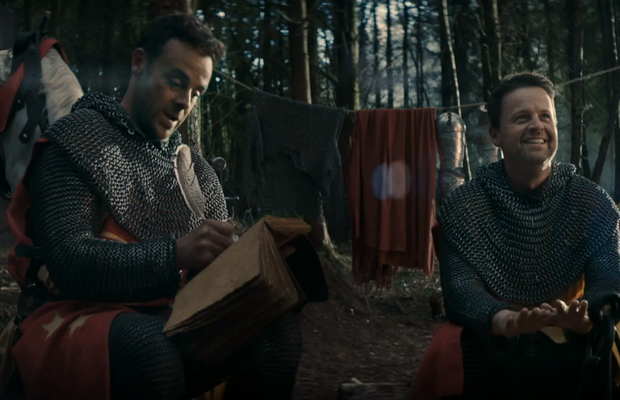 To celebrate the return of ‘I’m a Celebrity....Get Me Out of Here’ to Gwrych Castle in Wales this November, ITV’s in-house creative agency ITV Creative unveils an epic ad, which follows iconic TV duo Ant & Dec’s medieval quest to this year’s location. The ad aired at 7.30pm on Saturday 23rd October.

In order to give viewers a taste of the gruelling trials and nail-biting moments in store for this year’s group of celebrities, ITV Creative and director Mike Baldwin bring cinematic scale to this year’s ad.

Opening on a welsh valley, a lone flag-bearer forges across the landscape on horseback. As he comes together and lifts his visor to speak with a companion on horseback we realise it is none other than Ant & Dec, on their way to the castle for the next season. Laying down the proverbial gauntlet, we see them developing the trials and readying the camp for this year’s celebrities.

To achieve the cinematic aesthetic, authenticity was key to the production. ITV Creative and director Mike Baldwin shot in Wales over two days, and worked closely with specialists and the Welsh Tourist Board, including jousting experts The Knights of Middle England. The entertainment group provided real human and equestrian armour for Ant & Dec, and their trusty steeds. Finishing touches were provided by world-renowned VFX company Framestore.

Tony Pipes, executive creative director, ITV Creative comments: 'It was a welcome return to Wales this year, giving us an instant epic and rugged background. With that real landscape, we wanted Ant and Dec to be decked out in the real deal when it came to their costumes and horseplay. So we put the call out across the land and enlisted the expertise of the Knights of Middle England to bring the film truly authentic and epic Knight fever."

Karl Ude-Martinez, The Knights of Middle England adds: “It was truly refreshing to get the opportunity to work on a big flagship show such as I am a Celebrity and get really creative. Bringing in horses, stunts, and armour always adds another dimension to any shoot but working alongside the ITV creative team it was clear that everyone wanted to create something truly epic that has never been done before. With some solid directing, great camera and drone work and a dash of the super talented comic duo Ant & Dec added in the mix (actually riding the horses), the final edit is something that ITV viewers are going to seriously enjoy! Wales, Castles, Horses and Stunts - it's a recipe for some top filmic action!”

The hero 40 second spot will be followed by 2x30 second films over coming weeks.