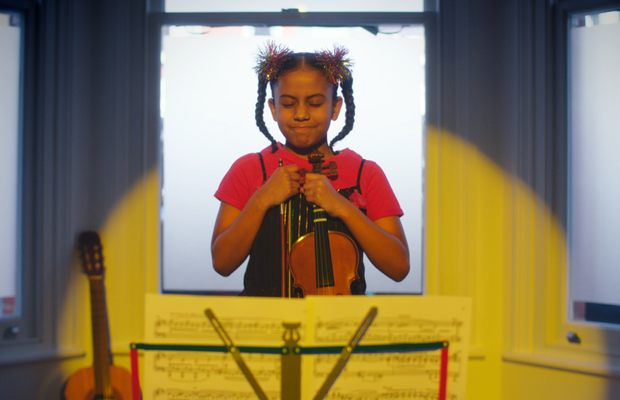 Research shows, starting at the age of five, many girls stop believing their gender can be anything. This issue is called the 'Dream Gap'. Early indicators suggest that for Black girls, the impact is even larger and this self-perception at a young age can be detrimental.

To help combat this, Barbie tapped one of the UK’s leading broadcasters Clara Amfo – just announced as a Barbie Role Model - along with London grassroots organisation Milk Honey Bees and talented award-winning filmmaker Eloise King to create a powerful film centering girls, and embodying Barbie’s 2021 International Women’s Day ‘Raise Your Voice’ campaign anthology, demonstrating to girls 'You Can Be Anything'.

Eloise has created an anthemic and emotionally driven film to support this initiative; the 60 and 30-second social spots are a rally cry to girls and women on why it’s important to stand up for yourself, your dreams and your beliefs, how you can build confidence, and how young girls can be empowered to believe in their potential, showing Clara as a positive role model to inspire children to believe in themselves and their voices.

The spot begins with a call to action from inspiring Milk Honey Bees founder Ebinehita Iyere asking Clara how they can show Black girls how amazing they are; Clara knows just the team to help her spread the message. Five fantastic Black girls Isis, Riley-Ann, Kenedy, Adunni and Bailey cast through Looks Like Me Agency ran by Selma Nicholls catapult the spot into a high energy and heart-warming manifesto of affirmations.

Broadcaster and Barbie Role Model Clara Amfo says: “There is so much power in being able to see yourself reflected positively in the world as an adult and it’s even more potent as a child. That power and the confidence that comes with it should only be protected and amplified.”

Filmmaker Eloise King adds: "Clara is a beautiful role model. In creating this piece for Barbie, I responded to Clara's joyful energy, the important community work of Milk Honey Bees and ethos of Barbie's 'Raise Your Voice' campaign to amplify the essence and voices of 5 incredible Black girls whose talents, personalities and confidence shine in their own unique ways. My film centres joy and play to encourage all girls to harness their limitless potential."

Founder of Milk Honey Bees Ebinehita Iyere: “Our work has always been about ensuring that Black Girls feel seen and heard, and with Clara Amfo and Barbie we were able to do that. This has and will always be about supporting girls to raise their voices and celebrate their limitless potential.”

The film portrays the unwavering confidence of these young girls and fill you with a sense of hope. The film will live online next to a number of other pieces of empowering content by Barbie this International Women’s Day.

The film is part of Barbie’s International Women’s Day campaign and follows the brands announcement of Clara Amfo’s announcement as a Role Model doll, a one-of-a-kind doll created in Clara’s likeness – the highest honour from the Barbie brand. This year, Barbie is supporting a Milk Honey Bees community creative writing programme and resource, which will culminate in a ‘Raise Your Voice’ anthology.