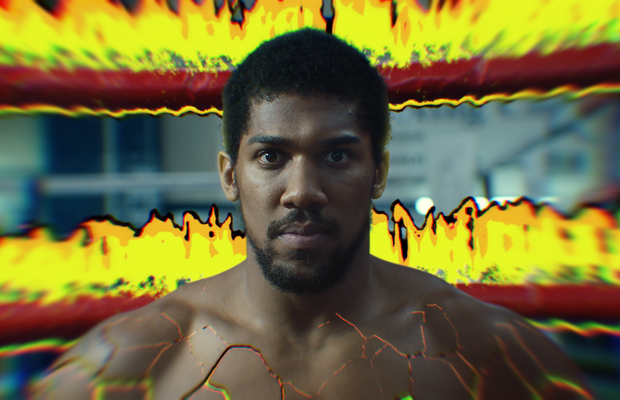 After appointing Kode Media as production and creative partner, EA Sports have released a powerful film to launch Anthony Joshua’s arrival into the new UFC 4 game.

Kode and 20something collaborated to create a film which features AJ training in Finchley and District Amateur Boxing Club – where his inspiring career began. As we see AJ training, we hear his voice tell the real, unfiltered story of himself as a fighter. The public are used to seeing AJ as a giant inside of the ring and a gentleman outside of it.

In this film, AJ delves deep into the more primal side of fighting for a living. “In the run up to the fight, it’s all business. But when you’re exchanging blows, that goes out the window. It’s personal” AJ tells us. He then recounts the extreme sacrifices he makes simply to prepare his mind and body for every fight. As we hear AJ deliver these powerful words we see striking, glitchy animations laid atop the footage, nodding to his Yoruba Heritage. Slowly and surely, we see AJ transform into his in-game self.

Elliott Starr, senior copywriter at 20something said: “This was an exciting opportunity for us, personally and professionally. Working with someone as accomplished as Anthony has been an honour and a privilege. Before we could put pen to paper we had a lot to learn about Anthony, his journey and his rise to the top of his sport. We all had to incubate with hours and hours of documentaries to make sure this film reflected his true voice, values and personality. Anthony Joshua entering a game like UCF 4 is a powerful statement, and it needed a powerful film to match. We wanted Anthony to be proud of what we created to announce his arrival in the game. The project was fun, energising and collaborative from start to finish, with ideas bouncing between Kode, 20something, EA Sports and AJ himself.”

The film was directed by Harry Kauty, at Kode Media, who recently directed the Arsenal x Bruised Banana film for Adidas Originals.

Alex Wilde, athlete relations director at EA SPORTS said: “As we continue to evolve our athlete storytelling, it was great to bring this film to life with KODE Media. Working with world class talent like Anthony Joshua always makes the job easier. However, the team at KODE & 20Something provided excellent insight & most importantly execution during what has been a challenging time for us all”.

Harry Cauty, director at Kode Media said: “To come out of lockdown with a project that packs this sort of punch is a dream for any director. I've admired EA's advertising since I first started playing their games many moons ago. To get our hands on a project of this calibre was a real treat.

What I loved about the opportunity was the chance to dig deeper. The script allowed AJ to speak in his true voice, and let people know what he's about. I wanted to create a hybrid piece. I wanted something between intimate exposé and intimidating visual feast.

It was real fun peppering the whole film with visual effects, they lifted the VO into a higher space. 20something and the animation team went above and beyond on this. They put in an incredible amount of hard work.

The shoot itself was minute-for-minute the most intense shoot of my career. There was a lot to capture, and AJ's enthusiasm and professionalism made such a difference. He gave us more time than his diary really had room for. To get that generosity from someone like him was inspiring. If AJ wasn’t such a gent, the film wouldn’t be what it is”.